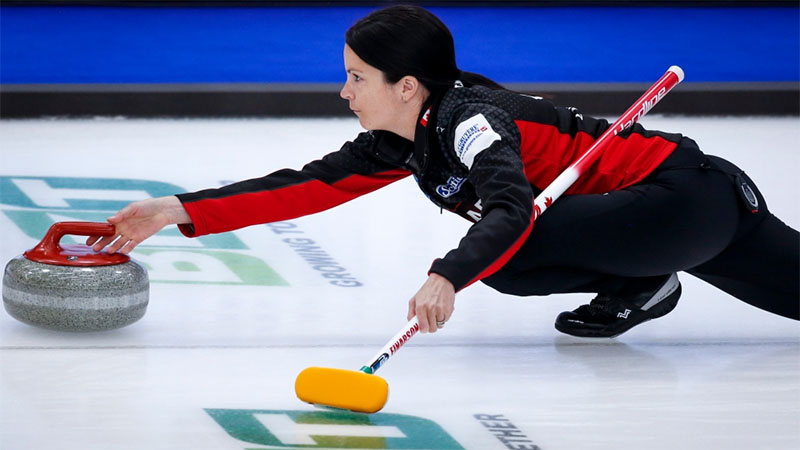 Canada’s Brad Gushue and Kerri Einarson will settle for an appearance in the bronze-medal game at the world mixed doubles curling championship after dropping a 7-4 decision to Scotland on Saturday.

Canada scored a pair in the sixth end to make it a one-point game but Scotland’s Bruce Mouat and Jennifer Dodds replied with back-to-back singles for the victory.

Scotland will play Norway’s Kristin Skaslien and Magnus Nedregotten for the gold medal on Sunday at the Curl Aberdeen facility.

Norway opened with a 7-5 win over Italy’s Stefania Constantini and Amos Mosaner before posting a 7-6 victory over Sweden’s Oskar Eriksson and Almida de Val in the afternoon semifinal.

Sweden and Canada will play in the third-place game Sunday morning.

Canada did well just to make it to the semifinal after pulling out an unlikely 7-6 extra-end victory over Switzerland’s Jenny Perret and Martin Rios in a qualification game.

Needing to draw the button for the victory, Perret’s final throw slightly overcurled to give Canada the game-winning steal. Einarson had forced an extra end by making a remarkable quadruple takeout to clear the four-foot ring and salvage a single point.

“It’s one of the best shots I’ve ever seen,” Gushue said. “You have to throw it really hard to make it and she hit it absolutely perfect. And even then I wasn’t certain it would roll quite far enough, and when I looked up it had rolled just a foot more than we needed.

“It was awesome and I was super impressed.”

Canada trailed 5-1 after four ends but scored three points in the fifth and stole a single in the sixth to pull even.

Gushue, from St. John’s, N.L., and Einarson, from Camp Morton, Man., finished round-robin play at 7-2. They were trying to become the first Canadian team to win gold in the event’s 13-year history.

Canada has reached the podium (two silver, one bronze) at the last three editions of the competition.

Joanne Courtney and Reid Carruthers won silver in 2017, Laura Walker and Kirk Muyres took bronze in 2018 and Jocelyn Peterman and Brett Gallant won silver in 2019. Last year’s championship was cancelled due to the COVID-19 pandemic.

The 2021 event serves as the main qualifier for mixed doubles at the Beijing Olympics. Gushue and Einarson secured an Olympic berth for Canada on Friday.

The seventh berth went to the Czech Republic on Saturday afternoon when Tomas Paul and Zuzana Paulova posted an 8-6 win over Tabitha Peterson and Joe Polo of the United States.

The two remaining spots in the 10-team Olympic field will be filled at a last-chance qualifier next season. China gets an automatic Olympic berth as the host country.

Canada’s John Morris and Kaitlyn Lawes won gold when mixed doubles made its Olympic debut at the 2018 Pyeongchang Games.

Manitoba Premier Brian Pallister calling for vaccines to be shipped from the U.S. to Canada