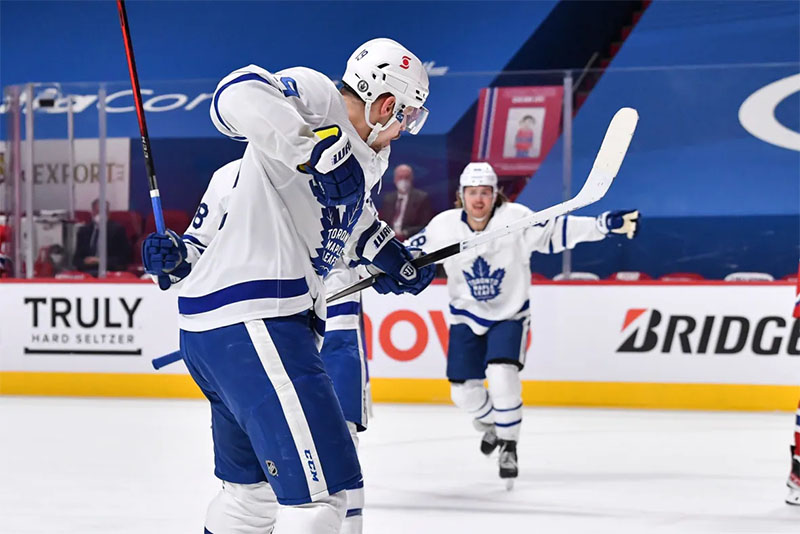 Canada’s first NHL crowd in nearly 15 months put on a show early Saturday as their team — as if fired out of a cannon — came in waves.

When the Maple Leafs finally pushed back and erased a two-goal deficit with under nine minutes to go in regulation and then dominated the Canadiens for much of overtime, the nervous, tension-filled 2,500 in attendance at the Bell Centre could barely muster applause as Carey Price, as he has so many times, kept his team breathing.

One mistake on the other side and a quick shot that took a deflection snapped the building back into a euphoria and ensured this Original Six playoff matchup will go the distance.

Jesperi Kotkaniemi buried the winner at 15:15 of OT as Montreal defeated Toronto 3-2 on Saturday to force a seventh and deciding game in the teams’ first-round series.

“It’s pretty unbelievable,” said the 20-year-old Kotkaniemi. “Remarkable…. It’s a great feeling. Especially when the fans are in the stands.

Corey Perry and Tyler Toffoli scored in regulation for Montreal, which got 41 saves from Price, including 13 in the extra period, as Toronto looked to close things out.

The Canadiens blew a two-goal lead in the third for a second time in 48 hours, but again found a way to keep their season going on borrowed time.

“There’s no quit in this group,” said Montreal captain Shea Weber, who played more than 37 minutes. “We grinded. [Price] kept us in it, especially in overtime there when they were pushing and gave us a chance.

“That one shot made the difference.”

With his team struggling to generate anything in the extra period, Kotkaniemi ripped his third of the playoffs glove side on Leafs goalie Jack Campbell — the shot glanced off defenceman Zach Bogosian — after Toronto blueliner Travis Dermott turned the puck over.

“That’s just hockey,” Toffoli said of his team being outshot 13-2 in OT. “You just have to find a way. One shot wins it.

Jason Spezza and T.J. Brodie had the goals for Toronto, while Campbell stopped 28 shots for the suddenly wobbly Leafs.

“We just didn’t come ready to play,” winger Mitch Marner said. “We really do have to start on time because it’s getting said a lot, and it’s not good enough.”

The Canadiens, who won Game 5 in overtime at Scotiabank Arena and are looking to come back from a 3-1 series deficit to win for the third time in franchise history, now head to Toronto for Monday’s finale with wind firmly in their sails.

The Leafs, meanwhile, desperately need to get back on track or face the prospect of another disastrous playoff exit for a team and fan base that’s suffered without a Stanley Cup, or much to get excited about, for the last 54 years.

“We’ve got to be a whole lot better.”

Saturday’s tilt between combatants with a long history, although not much of it recent, was played in front of those boisterous 2,500 fans inside the 21,302-seat venue after the Quebec government relaxed some restrictions and the province’s curfew ended Friday.

“We could hear them before the game, and going out for warmups, had chills,” Weber said. “Honestly, it was unbelievable. It felt like a lot more than 2,500 people. It was amazing. I can’t imagine what 20,000 people would be like.

The winner of Toronto-Montreal will take on Winnipeg after the Jets registered a surprising sweep of Connor McDavid’s Edmonton Oilers in the Canadian-based North Division’s other first-round series.

Badly outplayed through 40 minutes, but still tied 0-0, the top-seeded Leafs got a power play early in the third period, but Price denied NHL regular-season goal leader Auston Matthews on the doorstep.

The Canadiens then got their second man advantage of the night when William Nylander went off for goalie interference, and Perry scored his first at 5:26 on a scramble in front as the Bell Centre exploded in celebration.

Keefe had his challenge for goalie interference denied, which put Toronto back down a man. Marner then fired a clearing attempt over the glass to gift the home side a 5-on-3 power play for 1:41.

And the Canadiens made the Leafs pay when Toffoli squeezed his first past Campbell at 6:43 to stretch the lead to 2-0 as Montreal fans — masked and socially distanced — again rejoiced throughout the cavernous building.

Down to five defencemen after Jake Muzzin left with an apparent groin injury in the second, Spezza breathed life into Toronto at 11:35 when his shot went in off the stick of Montreal defenceman Jeff Petry before Matthews hit the post a couple minutes later.

The Leafs continued to push, and Brodie fired his first goal of 2021 off Petry’s skate and past Price with 3:11 left in regulation before being mobbed by teammates inside a stunned Bell Centre.

Toronto then carried the play much of OT, but Price was there at every turn to set up the late drama.

“It was special, really special,” Kotkaniemi said. “Just seeing people out there, I think we finally have a feeling we’re moving in the right direction.”

Without a playoff series victory in 17 years, but 11-1 all-time when leading a series 3-1, the Leafs were still minus captain John Tavares (concussion, knee), but Nick Foligno (lower-body injury) returned to the lineup after missing three games, while Canadiens counterpart Jake Evans was back in after getting hurt in the opener. Montreal also inserted defenceman Brett Kulak for the injured Jon Merrill.

Spurred on by the first Canadian hockey crowd since March 11, 2020 — fans belted out O Canada to a national television audience — Montreal came out on firing and led 8-0 in shots during an early barrage that included a Toronto power play.

Campbell, who was jeered by the crowd early and often, made big stops on Toffoli, Weber, Nick Suzuki and Eric Staal, with the Leafs firmly on their heels.

The scenes outside the Bell Centre before puck drop resembled some level of normality as fans enjoyed beers in the sunshine.

The Canadiens gave Game 6 seat priority to season-ticket holders, luxury-suite holders and corporate partners to purchase tickets in pods of two or four.

Buyers were allowed to resell tickets, and more than a few took advantage. Prices were exorbitant for the average fan on the secondary market, with the cheapest pair available a couple of hours before puck drop still priced around $1,800 on Ticketmaster.

But for Canadiens fans in attendance — and with the money available — it was worth every dollar.

“They definitely helped us get that win.”