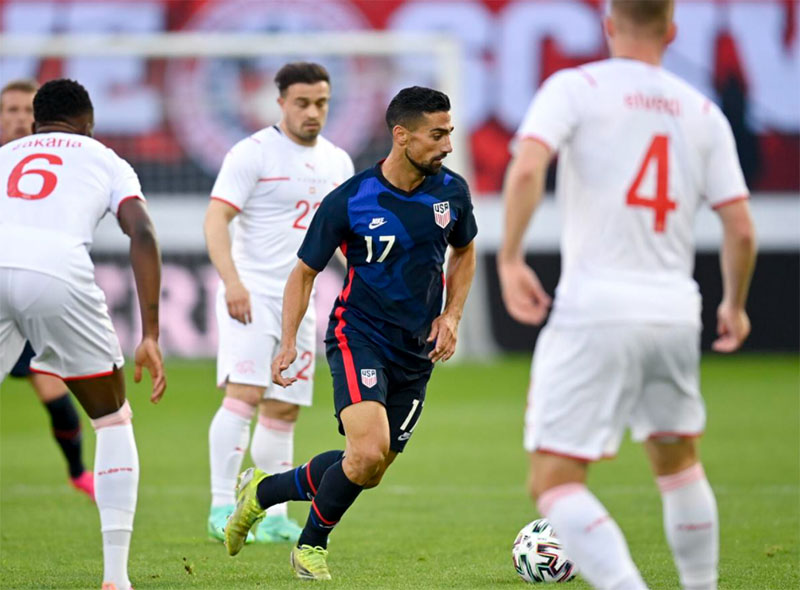 The United States headed on the 5,200-mile trip to its CONCACAF Nations League semifinal coming off its first loss since October 2019.

Steven Zuber scored after failed clearances by Sergiño Dest and Tim Ream in the 63rd minute, and Switzerland beat the U.S. 2-1 in an exhibition on Sunday night at St. Gallen to stop the Americans’ nine-game unbeaten streak.

“We need to have more time together,” midfielder Weston McKennie said. “It’s a matter of just like your own chemistry with some of the players.”

Sebastian Lletget put the 20th-ranked U.S. ahead in the fifth minute, but Ricardo Rodriguez tied the score for the No. 13 Swiss in the 10th minute.

Rodriguez sent a penalty kick wide in the 42nd minute after Dest was called for a hand ball when Silvvan Widmer flicked the ball off his outstretched right arm.

Switzerland went ahead just after defender John Brooks was replaced by Tim Ream, which led to some sloppiness.

After Dest swung a foot in a clearance attempt and deflected a cross toward Breel Embolo. Ream tried to clear but deflected the ball back to Embolo. His spinning shot went right to Zuber, who had an open shot to beat goalkeeper Ethan Horvath for his eighth goal.

“We definitely lost compactness in the second half. It became difficult to press,” U.S. coach Gregg Berhalter said, crediting the Swiss for switching to a 5-3-2 formation. “It started to open up space, gave them time on the ball, forced our back line to move back a little bit and that created more space in midfield.”

Its five-game winning streak over, the U.S. will travel to Denver on Monday for its first competitive match in 19 months. After the semifinal against Honduras on Thursday, the U.S. plays Mexico or Costa Rica at Denver on Sunday in the championship or third-place game. A friendly against Costa Rica follows at Sandy, Utah, on June 9.

Top American goalkeeper Zack Steffen missed the match after spending Saturday in Portugal with Manchester City for the Champions League final, won 1-0 by Chelsea and Christian Pulisic. Steffen and Pulisic will report to the U.S. team in Denver.

“You try to tell Christian that he’s not playing on Thursday,” Berhalter said. “That’s going to be a very difficult one, coming off of winning the Champions League, coming into the game, making an impact in that game. He’s ready to go.”

Midfielder Tyler Adams, bothered by a back injury in recent weeks, did not dress against the Swiss and is uncertain for the Nations League.

Lletget scored his seventh international goal, his fifth in the five last matches. Gio Reyna sent a shot in front of the net, and Nico Elvedi’s attempted clearance was intercepted by Lletget, who exchanged taps with Brendan Aaronson and poked the ball past goalkeeper Yann Sommer from 8 yards.

“He just does his job,” Berhalter said. “Happy how he’s contributed with this team over the past couple years.”

Rodriguez equalized with his ninth international goal. He took a pass from Widmer on a quick transition and his 20-yard shot deflected off Reggie Cannon and past the outstretched left arm of Horvath, who played his first national team game since March 2019.

Reyna hit the outside of Sommer’s left post from 18 yards in the 52nd minute, and Horvath used his face to block Embolo’s shot two minutes later.

Right back DeAndre Yedlin replaced Cannon in the 81st minute, making his first international appearance since 2019.

Switzerland opens the European Championship against Wales on June 12.