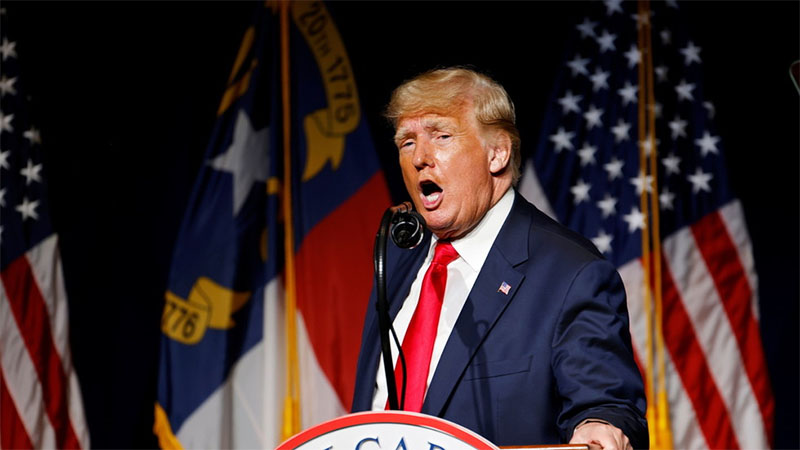 A new poll has liberals up in arms and critics pushing back after it declared that approximately three in 10 Republicans believe Donald Trump will be reinstated as the US president.

The Politico/Morning Consult poll, published on Wednesday, found that while a majority of Republicans reject the potential of Trump being reinstated, 29% of respondents said they do believe the former president will be given his title once again this year.

Across political lines, 72% dismissed the idea that Trump would be reinstated before the end of the year. Only 19% said it was “somewhat likely” or “highly likely” that Trump returns to office.

The poll, taken among over 1,900 US adults, did find a majority of Republicans and Democrats (75%) both believe that democracy is under threat.

The theory that Trump will be reinstated is a loose QAnon conspiracy theory that mainstream media outlets have made a point to highlight as the former president continues to float his belief that the 2020 presidential election was rigged – though no proof of widespread fraud has been found.

In a recent speech in North Carolina, Trump called the election between him and Biden “the most corrupt election in the history of our country.”

The idea of “3 in 10 Republicans” believing Trump will be reinstated as president spread quickly across social media, tempting fodder for liberal critics.

“The level of propaganda in our country is incredibly dangerous,” liberal author Amy Suskind tweeted in response to the poll.

3 in 10 Republicans believe Trump will be 'reinstated' in August. What happens when he isn't? The level of propaganda in our country is incredibly dangerous. https://t.co/dPnMlln4Bc

So a new Politico-Morning Consult pool found that 3 in 10 Republicans think Trump will be reinstated. I'm inclined to say the problem is a lack of education. But we've seen, w/ the mind-degrading drumbeat of propaganda (Fox, Newsmax, etc.), even educated people can be hypnotized.

Others dismissed the poll, citing oddities such as the fact that on top of the Republicans who believe Trump will be reinstated, 13% of respondents identifying as Democrats also believed the former president would return to office.

This same poll also said that 13% *of Democrats* agreed Trump will be reinstated.

Maybe polling of this type is just wacky and unreliable and shouldn't be done? But hey, you got your anti-GOP headlines. https://t.co/mr8l5jLtaQ

While many dismiss theories that Trump will somehow be reinstated to office, rumors have swirled about a possible 2024 presidential run. Though he hasn’t confirmed a run, Trump has hinted he has major announcements about his political future coming soon.

“As you know, it’s very early. But I think people are going to be very, very happy when I make a certain announcement,” he said last month when asked about another presidential run. According to the Politico poll, a majority of Republicans (59%) want to see Trump play a major role in the GOP’s future.