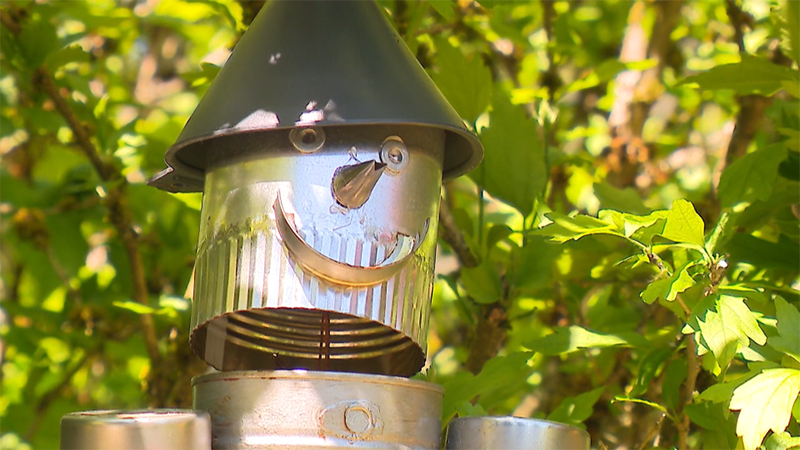 When Ed Lien lost his beloved wife, Shirley, in 2017 after 66 years of marriage, he knew he wanted to stay in the home where they raised their family.

But six decades of memories made it difficult. So the 90-year-old North Vancouver, B.C., man poured himself into a front yard project.

“It was very important for me to be able to do this, because I needed a focus,” Lien said. “It simply began as building a fence, and it grew into a project for the Wizard of Oz.”

The classic film was the couple’s favourite.

“We loved the colour and the dancing,” he said in an interview with CTV News. “And we were particular fans of Judy Garland and Ray Bolger, and Ray Bolger was the scarecrow, as you probably know.”

So after adding a winding yellow brick path through his front yard, he added a scarecrow in the garden. There is a tin man and his oil can hanging from a tree, a cowardly lion peeking out from some bushes, and a Dorothy cutout is there in her iconic blue checkered dress.

Lien has also planted seven different colours of roses around a large arch made of interlocking wooden chain, that he hopes will grow into a rainbow.

Next door neighbour Nora Iliakis has marvelled at the senior’s creativity and effort.

“It’s become this beautiful garden full of lots of surprises. And impressive, it’s very impressive the work that’s gone into it,” she said.

Lien says the garden has helped him channel his grief over Shirley’s death, and gave him reason to get up in the morning. He plans to keep adding to it.

“And I intend to continue to live in our family home, because her things are there. Her purse is still on the windowsill upstairs where she left it. It gives me comfort,” he said.

There is a small plaque inside the front gate that reads, “A Tribute to Shirley, Love Ed.”

And what would she think of the Wizard of Oz-themed garden and the attention it’s receiving?

“She would be amused. At the same time, she never ever drew attention to herself, so as I’ve said before, there would be a bit of a conflict there,” said Lien.

The garden is a constant reminder of his love, and his loss.

“Of course many times I’ve become depressed,” said Lien. “But it would be so much worse if I wasn’t living here.”

He believes Shirley would have wanted him to stay. After all, there’s no place like home.

WestJet CEO Ed Sims to retire at end of 2021

Vaccination status cards may be the ticket to reopening the Canada-U.S. border