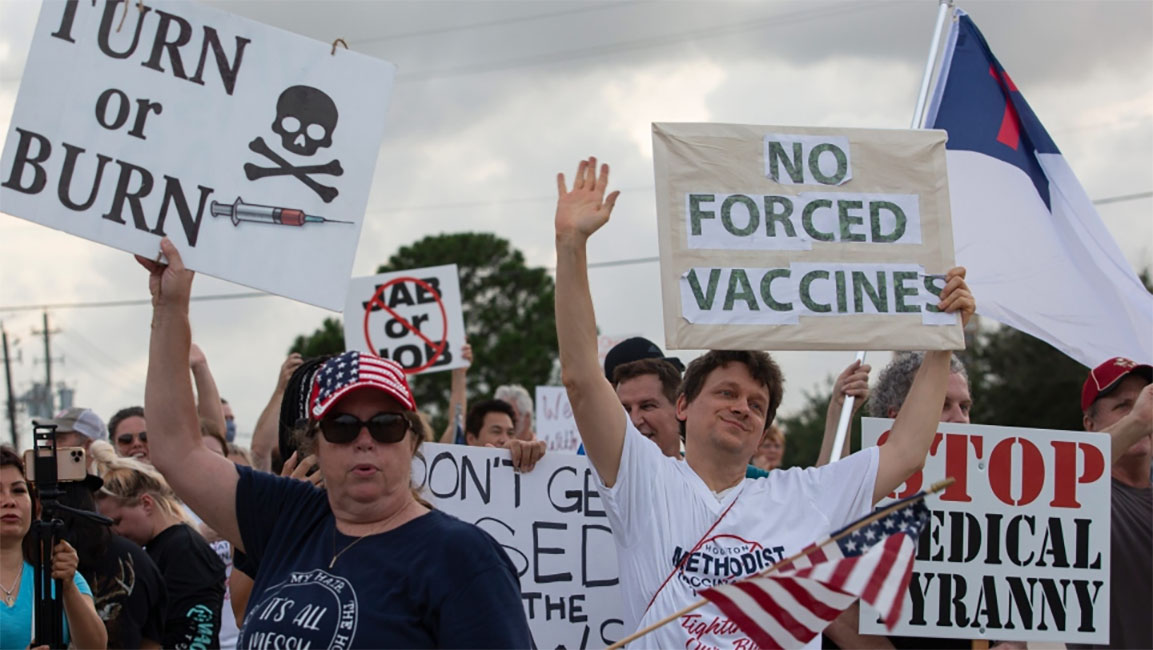 A group of Houston Methodist Hospital workers protested on Monday the health care system’s requirement that staffers be vaccinated against COVID-19, according to CNN affiliate KTRK.

Employees had to get the COVID-19 vaccine by June 7, according to Houston Methodist.

More than 100 staffers at Houston Methodist filed a lawsuit on May 28 against the health care system over its COVID-19 vaccine policy, saying the vaccines are “unapproved” and “experimental.” The plaintiffs are asking for a temporary injunction against the policy.

Houston Methodist became the first major health care system in the US to mandate COVID-19 vaccinations on March 31, starting with managers, according to an initial announcement from Houston Methodist CEO Marc Boom.

“A little less than 200 individuals right now are suspended, and we hope they get their vaccine over the next two weeks, but if they don’t, they will be finding work elsewhere,” Boom told CNN’s Wolf Blitzer on Tuesday.

In a statement Monday, the hospital system said almost 100% of its 26,000 employees have complied with the vaccination policy.

“A few employees who did not meet the vaccine requirement invited other employees yesterday to join them as they ended their shift,” the hospital’s statement said. “We fully support the right of our employees to peacefully gather on their own time. It is unfortunate that yesterday’s milestone of Houston Methodist becoming the safest hospital system in the country was overshadowed by a few disgruntled employees.”

Boom characterized the unvaccinated employees as a small and vocal group, “whose messaging has been co-opted by an organized, anti-vaccination movement,” and added that about 45 of the newly suspended employees have actually received one of their two required shots.

The suspended employees who elected not to receive the vaccine are violating the tenets of the medical profession, he said.

EMPLOYERS CAN REQUIRE EMPLOYEES TO GET VACCINATED IN U.S.

According to the lawsuit filed in Montgomery County District Court, the group of health care professionals says “the currently available experimental vaccines” have not received full approval from the FDA and are “investigational products.”

The three COVID-19 vaccines in use in the US are authorized for emergency use, but they have not been granted formal approval by the FDA. Emergency use authorization is used when a product is new but the FDA has decided benefits outweigh the risks. Full approval requires more time and data.

The employees are represented by attorney Jared Woodfill, a former chairman of the Houston-area Republican party, according to his website. He previously sued to dismantle drive-through voting in Harris County last year and represented a group of Texas bar owners suing to reopen during the pandemic, according to a report from The Associated Press.

In the hospital’s statement, Boom said that it legal for health care institutions to mandate vaccines, noting that the hospital has required employee to get the flu vaccine since 2009.

“The COVID-19 vaccines have proven through rigorous trials to be very safe and very effective and are not experimental,” Boom said. “More than 165 million people in the U.S. alone have received vaccines against COVID-19, and this has resulted in the lowest numbers of infections in our country and in the Houston region in more than a year.”

The federal Equal Employment Opportunity Commission said in December that companies can legally mandate that all employees re-entering the workplace and new hires be vaccinated for COVID-19. There are two exemptions companies must allow for, according to the EEOC: a disability or religious reasons.

Los Angeles nun to plead guilty to US$835,000 school theft

Trump not liable for ‘crude’ remarks about accuser: fed lawyers