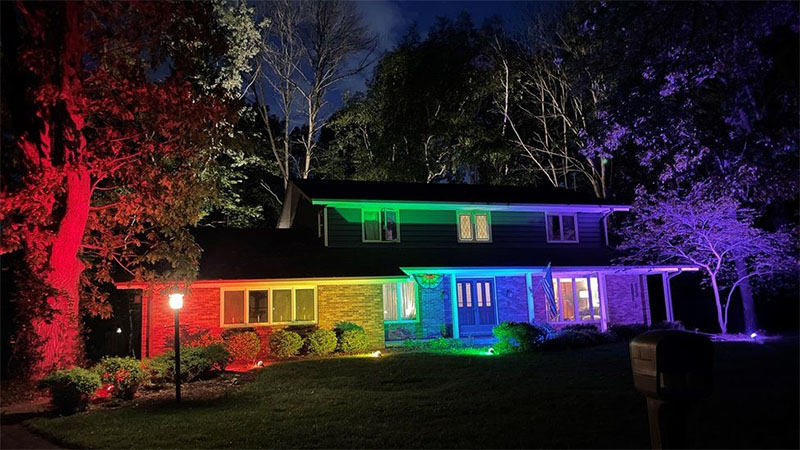 A gay couple in the US state of Wisconsin have created an online buzz with a social media post explaining why they lit up their home with rainbow-coloured floodlights.

Memo Fachino, 35, and his husband Lance Mier, 36, were told to remove a Pride flag from their porch after new rules were introduced in their neighbourhood.

In a post on Reddit last week, the couple said they took advantage of a loophole to then install the lights.

In it they explain that their local housing association in the city of Racine recently imposed restrictions on displaying flags outside homes “due to some neighbours flying BLM [Black Lives Matter] flags, thin blue line flags [often used to show support for the police], and other opinion flags”.

The new rule, the couple write, permits residents to fly only the US flag.

The couple said they received an email informing them they had to remove the rainbow flag – which had been displayed on their porch for the past five years – after it was reported to authorities ahead of Pride month, an annual celebration that supports the LGBT community.

“Looking through our new rules, we noticed that removable lights are permitted without restriction,” the post reads, adding that the couple bought six coloured floodlights and “we washed our house in Pride colours”.

After receiving thousands of responses, the couple updated the original post thanking Reddit users for their “amazing support”, adding that they were surprised by the amount of attention it was getting and that they “just can’t keep up with the comments”.

Mr Fachino, who sits on the board of the housing association, told the BBC on Wednesday that he was aware of plans to change the guidance on flags in the neighbourhood, and understood why the new rule was introduced. He said the email about removing the couple’s rainbow flag arrived a day after the change was voted on.

“The board passed this rule trying to be proactive, and to prevent friction between neighbours who may be flying opposite political or opinion flags,” he said, adding that he felt in no way targeted. “It’s a simple rule that applies to all of us equally.”

Mr Fachino said the change would have been implemented regardless of the time of year. “We don’t feel like it was created to prevent us from flying our flag or trying to have it removed ahead of Pride month.”

He said the idea to use multi-coloured floodlights came from the couple using different coloured lights previously on occasions such as Christmas, “so we knew we could make it work”.

More than 6,000 users have so far commented on the Reddit post, offering support and thanking the couple while questioning the decisions of housing associations.

“The lighting is much better than a simple flag,” one user commented. “Never remove the lights, they’re fabulous,” wrote another.

Mr Fachino said the colourful lights would “stay up throughout June at least”. The couple have been together for almost eight years, and married for five.

As well as celebrating the LGBT community, Pride month also commemorates the Stonewall riots – the protests that changed gay rights for a lot of people in America and beyond.

The Stonewall riots in June 1969 were prompted by a police raid on a gay bar in New York that led to widespread demonstrations.