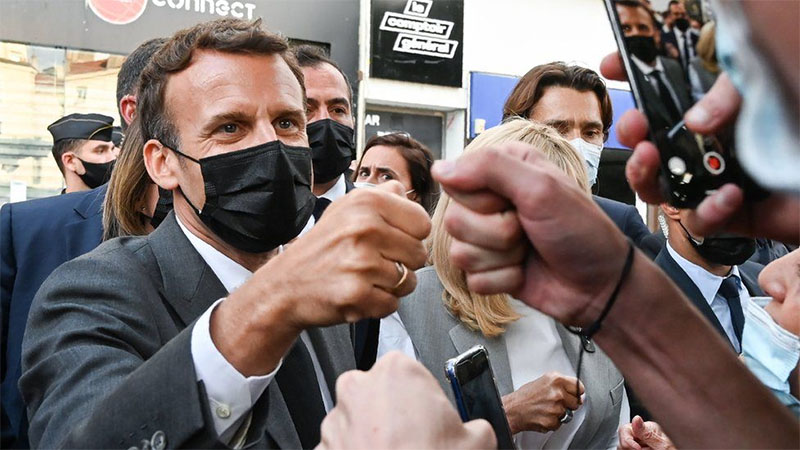 Investigators have reportedly found weapons and a copy of Hitler’s anti-Semitic text Mein Kampf at the home of one of two suspects detained after President Emmanuel Macron was slapped in the face on an official visit.

The men, aged 28, were arrested outside a hotel school in south-east France.

Their homes were searched after the attack in Tain-l’Hermitage.

The book and weapons were reportedly found at the home of the man suspected of filming the assault on Mr Macron.

Among the weapons said to have been recovered at his home are a sword, a dagger and a collector’s rifle that was legally in his possession. It is not clear if the weapons were in working order.

The French president was slapped after running towards a crowd separated from him by metal barriers, with two of his guards alongside him and another two rushing to catch up.

Mr Macron’s spokesman denied reports that he had been warned by his security detail not to approach them.

“Clearly the president of the republic will continue having direct contact with the French people, just like the rest of the government,” said Gabriel Attal.

Hours after the incident, Mr Macron said it had been an “isolated event” and “ultra-violent people” should not be allowed to hijack public debate.

Who are the suspects?
The first man, suspected of slapping the president, is believed to have had an interest in a number of far-right and monarchist figures, as well as medieval French history.

On his Instagram page he describes himself as part of a national federation of historic European martial arts, alongside pictures of himself dressed in costumes from the Middle Ages and carrying a long sword.

But according to one friend, Loïc Dauriac, he is “apolitical” and the slap was completely out of character. Le Parisien website quoted a source in the investigation as summing up his politics as “ideological mush”.

The suspect is also heard to shout “Montjoie et Saint-Denis! Down with Macronism”. Although he used a medieval battle cry, French commentators also believe he could be mimicking a comic character in medieval armour from the 1993 hit film Les Visiteurs (The Visitors).

Shortly before the incident, he stood alongside two other men during a TV interview, in which one of them says, “There are things you’d like to say to [Mr Macron] but unfortunately you can’t… the decline of France.”

The homes of both suspects were searched in a village to the north of Tain-l’Hermitage after Tuesday’s attack. The second suspect is reportedly also a fan of medieval combat.