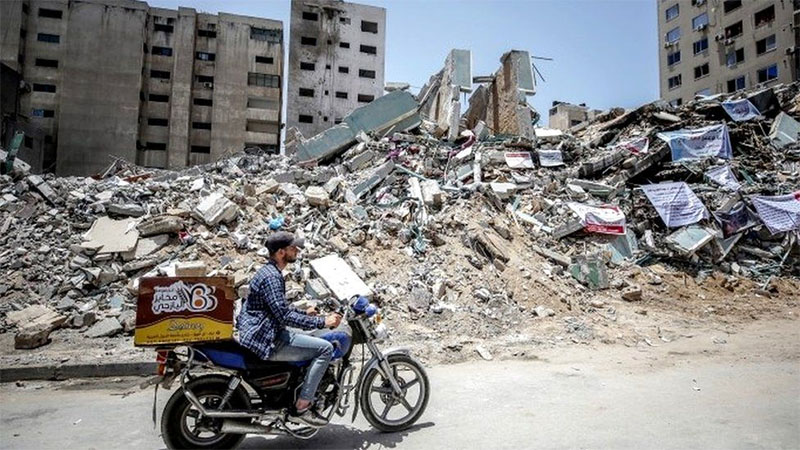 Israel says a media building destroyed by one of its air strikes in the recent Gaza conflict was being used by the Hamas militant group to try to jam its Iron Dome missile defence system.

The Jala Tower housed the offices of Associated Press (AP) and Al Jazeera.

AP news agency said it had not seen evidence to support Israeli allegations that militants were operating there.

Hamas, which controls Gaza, denied it had offices in the building and called its destruction “a scheming war crime”.

“The Israeli occupation’s repeated lies about the presence of Hamas offices in Jala Tower is a failed attempt to justify its crime by targeting a civilian tower that houses media offices and international television channels,” spokesman Hazem Qassem told the BBC.

The recent conflict began after weeks of spiralling Israeli-Palestinian tension in occupied East Jerusalem which culminated in clashes at a holy site revered by both Muslims and Jews.

Hamas began firing rockets into Israel after warning it to withdraw from the site, triggering retaliatory air strikes from Israel on Gaza targets.

Eleven days of fierce exchanges left 256 people dead in Gaza, according to the UN, with 13 people killed in Israel, before a truce was agreed on 21 May.

The UN said at least 128 of those killed in Gaza were civilians. Israel’s military said 200 were militants; Hamas’s leader in Gaza, Yahya Sinwar, put the number of fighters killed at 80.

Following the attack on the tower block on 15 May, both AP and Al Jazeera demanded an explanation from the Israeli government.

Israel’s envoy to the UN and ambassador to the US, Gilad Erdan, travelled to AP’s offices in New York on Monday and the Israel Defense Forces also released a statement on Tuesday.

Mr Erdan told executives of the US news agency that the building housing its Gaza operation was being used by Hamas to develop an electronic jamming system against the Iron Dome.

He said Israel did not suspect AP employees “were aware a covert Hamas unit was using the building in this way”.

Mr Erdan said Israel “upholds the importance of press freedom,” adding: “Israel is willing to assist AP in rebuilding its offices and operations in Gaza.”

More than 4,300 rockets were fired towards Israel from Gaza during the conflict, 680 of which fell short and landed in Gaza, according to the IDF. It says the Iron Dome intercepted about 90% of the rockets that crossed into Israeli territory and were headed for populated areas.

Associated Press told Haaretz it welcomed the meeting with Mr Erdan and the rebuilding offer, but added: “Israeli authorities maintain that the building housing our bureau was destroyed because of a Hamas presence that posed an urgent threat. We have yet to receive evidence to support these claims.

“AP continues to call for the full release of any evidence the Israelis have so that the facts are public.”

Shortly after the air strike, Sally Buzbee, AP’s executive editor, said it had had offices in the building for 15 years and had never had any indication that Hamas might be there.

Qatar-based Al Jazeera strongly condemned the attack and said it would do all it could to “hold the Israeli government responsible for its actions”.

It condemned what it called a “clear act to stop journalists from conducting their sacred duty to inform the world and report events on the ground”.

US Secretary of State Antony Blinken was among those calling for an explanation.

Israel gave an hour’s prior warning of the air strike on the 12-storey block, allowing evacuation.

The ceasefire in the region has since held, and the UN Human Rights Council has voted to investigate the violence, a move welcomed by the Palestinians.

But Israel said the move showed an “anti-Israel obsession” and the US said it would endanger progress in bringing calm to the region.

Vaccination status cards may be the ticket to reopening the Canada-U.S. border

Harry and Meghan did not ask Queen to use Lilibet name