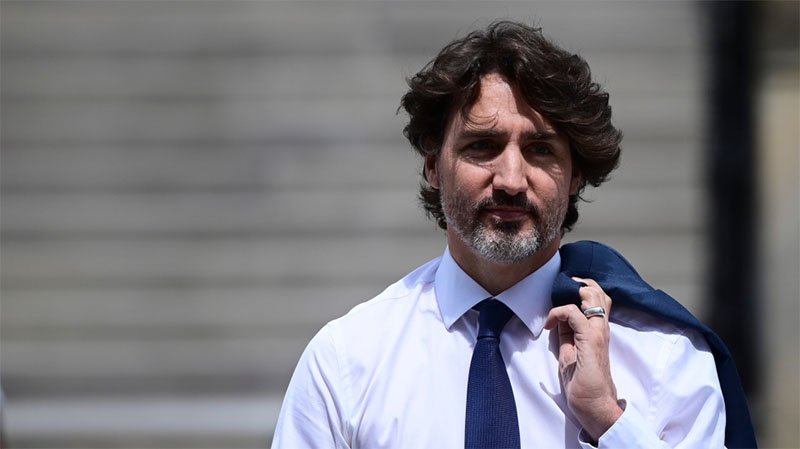 Prime Minister Justin Trudeau leaves Canada today for a G7 summit as the country is seized by tragedy and demands for justice for Indigenous Peoples and Muslims.

Trudeau is to arrive in Cornwall, U.K., for a three-day gathering with G7 leaders and then travel to Brussels for a NATO summit, followed by a meeting between Canada and the European Union.

Ending the pandemic, recovering the global economy — including for international travel — and getting vaccines to less wealthy countries dominates the agenda for the G7.

Recently though, Canada’s economic and health responses to COVID-19 have been eclipsed by an outpouring of grief over the targeted killing of a Muslim family, and a First Nation’s discovery of what are believed to be the remains of 215 Indigenous children at a former residential school.

Trudeau spoke at a vigil two days ago in London, Ont., for the Afzal family. Four members of the family died when a man drove a truck into them while they were out for a walk Sunday evening. A nine-year-old boy survived.

The prime minister called it a terrorist attack.

His Liberal government has also faced questions over its lack of progress on a promise to implement the 94 calls to action from the Truth and Reconciliation Commission into Canada’s former residential school system.

As well, Trudeau has been urging Pope Francis to apologize for the Catholic Church’s role in operating these facilities, where generations of Indigenous children suffered abuse and isolation from their families and culture.

Heading into the G7, Trudeau’s office says besides the pandemic, he will focus on climate change — a major policy plank for his Liberal government — as well as economic growth and co-ordinating approaches to promote gender equality and human rights.

Canada also joins other countries whose finance ministers signed on to a tax reform that would set a global minimum corporate tax of at least 15 per cent, which has drawn criticism from the Opposition Conservatives who say the country should handle tax policy on its own.

It’s his first travel outside of Canada in more than a year because of the COVID-19 pandemic, and the first time all G7 leaders will be in the same room since 2019 — and without former U.S. President Donald Trump.

Current U.S. President Joe Biden will also make his first trip abroad since being elected to the White House last fall to attend the summit, providing the first chance for him and Trudeau to talk face-to-face since he took office.

“This is the most exclusive club in the world,” said John Kirton, director of the G7 Research Group at the University of Toronto.

“Sometimes it’s what I’ve called the lonely hearts club — or group therapy session. Nobody but the fellow leaders of the most powerful democratic countries in the world governing advanced economies can understand how tough that job is.”

Trudeau travels having received one of his two doses of the Oxford-AstraZeneca shot. His office said he will quarantine for up to three days at a hotel in Ottawa when he returns next week.

The G7 includes Canada, the U.S. and United Kingdom, Japan, France, Italy and Germany, as well as the European Union.

Summit observers say Trudeau enters being the leader who has served the second-longest, next only to German Chancellor Angela Merkel.

British Prime Minister Boris Johnson has asked countries to come with concrete commitments on how to end the pandemic by the end of 2022.

Experts say Canada will have to decide how it wants to contribute to that effort, for example through financing or donating vaccines.

It hasn’t announced any plans to share its vaccines despite having guaranteed delivery of more than 100 million doses for the year when giving the population its two doses requires 76 million.