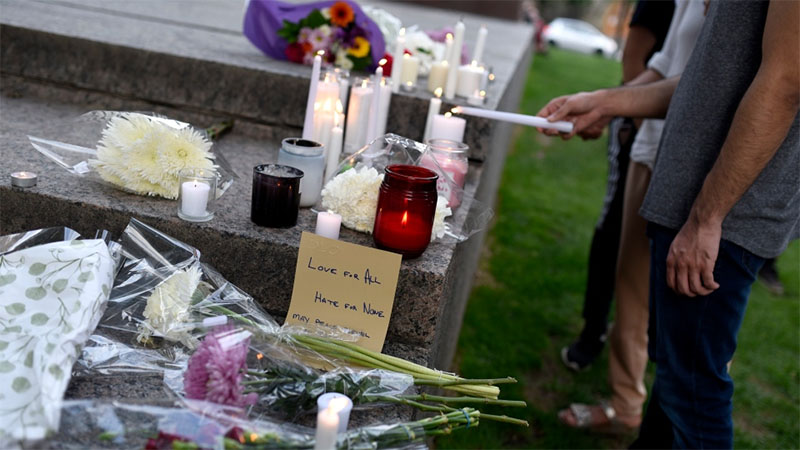 Nathaniel Veltman, the 20-year-old man charged with four counts of first-degree murder following an alleged vehicle attack in London, Ont., worked at an egg packing facility and was once described by a psychologist in court documents as being prone to anger.

“There is evidence that this was a planned, premeditated act and that the family was targeted because of their Muslim faith,” said London Police Service Det.-Insp. Paul Waight during a briefing on Monday.

Veltman was arrested about seven kilometres from the crash near the Cherryhill Village Mall in London.

Police have said he was wearing body armour at the time of his arrest. One witness told CTV News that Veltman was also wearing swastikas and was laughing as he was being arrested.

He is scheduled to appear in London court on Thursday. The allegations have not been proven in court.

Veltman and his twin sister are the eldest of six siblings, ranging in age from 10 to 20. His father works at a technical college in Sarnia, Ont., while his mother has worked as a personal trainer.

Veltman’s aunt told CTV News the family is “devastated” by the allegations, but declined to comment further.

According to court documents, Veltman left his mother’s home in Strathroy and legally withdrew from parental control in 2017 after his parents’ separation. He then lived with a girlfriend before getting his own apartment.

On Tuesday, several police cars were seen outside of his downtown London apartment building on Covent Market Place.

Police have not provided an image of the suspect.

Veltman worked as a part-time shipping employee Gray Ridge Egg Farms, an egg-packing facility in nearby Strathroy, Ont. In a statement on the company’s website, Gray Ridge Eggs Inc. CEO William H. Gray said management and staff at the facility “were shocked and saddened” to find out one of their employees had been accused in the murders.

“We join our community in expressing condemnation of this violent attack and offer our heartfelt sympathy to the family and the Muslim community,” Gray continued in the statement.

Tina Perry, a co-worker of Veltman’s for several years, told CTV News that her former colleague mostly kept to himself.

“I’m very shaken up about this,” she said.

Perry told CTV News that the company called an emergency meeting on Tuesday to offer counselling to anyone struggling with the news.

In court documents from his parents’ 2016 divorce proceedings and subsequent custody filings, Veltman is portrayed as having anger issues and mental illness.

In a section entitled “Nathaniel’s struggles” from custody filings in 2017, London psychologist Dr. Richard Zayed described Veltman as “often awkward socially, lacked confidence and was preoccupied with what others thought.”

After his parents divorced, Veltman became “frighteningly angry” and became disrespectful to his mother, leading her to lock herself in her room to avoid him as he became aggressive, the documents say.

Court documents say Veltman’s parents agreed to encourage him to continue therapy and agreed not to leave him unsupervised with his younger siblings.

Veltman has not been charged with a hate crime, though police are still considering additional charges.

“Their lives were taken in a brutal, cowardly, and brazen act of violence,” Trudeau said Tuesday. “This killing was no accident. This was a terrorist attack motivated by hatred in the heart of one of our communities.”

Williams said on Monday that evidence “from a variety of sources” indicated that the attack was allegedly carried out because of the family’s Muslim faith, but added on Tuesday that any involvement with any hate groups has not been established.

“The information right now suggests that this individual acted alone,” Williams said. “However, we need to look into his background, his recent activity.”