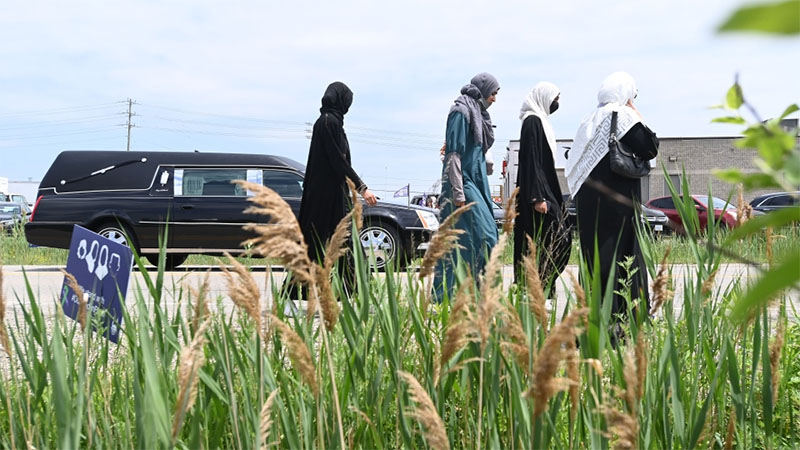 Hundreds gathered in London, Ont., on Saturday afternoon at the public funeral for four members of a Muslim family who were killed in an attack that police have called a hate crime.

The public was invited to join in celebrating the lives of Talat Afzaal, 74, her son Salman Afzaal, 46, his wife Madiha Salman, 44, and their 15-year-old daughter Yumnah Salman.

All four were killed last Sunday when they were hit by a truck during one of their regular evening walks. The couple’s nine-year-old son, Fayez, was the only survivor and remains in hospital with serious injuries.

The funeral began with a recitation from the Qur’an by Imam Mohamed Fouad from Quebec City, which was translated into English by Munir El-Kassem, the director of religious affairs at the Islamic Centre of Southwest Ontario.

Pakistan’s ambassador to Canada, Raza Bashir Tarar, spoke briefly at the funeral saying, “I stand here before you to reiterate the condolences from my Prime Minister Imran Khan, from my foreign minister Shah Mahmood Qureshi, from the entire nation and country of Pakistan which stands shoulder-to-shoulder with you in this hour of grief; in this time when our hearts are bleeding because of the atrocity that has befallen this wonderful marvelous family.”

“The very fact that their coffins are draped in the beautiful Canadian flag is a testimony of the fact that the entire Canadian nation stands with them,” he added.

Some of the family’s relatives also spoke at the ceremony and shared touching tributes.

“Last Sunday evening four fountains of sweetness were taken away. Three generations taken too soon,” Madiha Salman’s uncle, Ali Islam, said at the service. “In schools, universities and nursing homes, across southwestern Ontario there are hundreds of lucky people who felt the gentle unassuming characters of our loved ones.”

“The outpouring of support we have received from Canadians and from across the world has confirmed the potential of absolute innate goodness inside human kind irrespective of colour and creed. The expressions of raw emotion, the prayers, the quiet tears, the messages of comfort from people we know and from people who are complete strangers has been the first step towards finding a way to heal,” he added.

The ceremony concluded with an early afternoon prayer for the family. They are expected to be buried later Saturday at the Islamic Cemetery of London in a private ceremony.

Seven deaths, 194 new cases of COVID-19 in Manitoba on Sunday