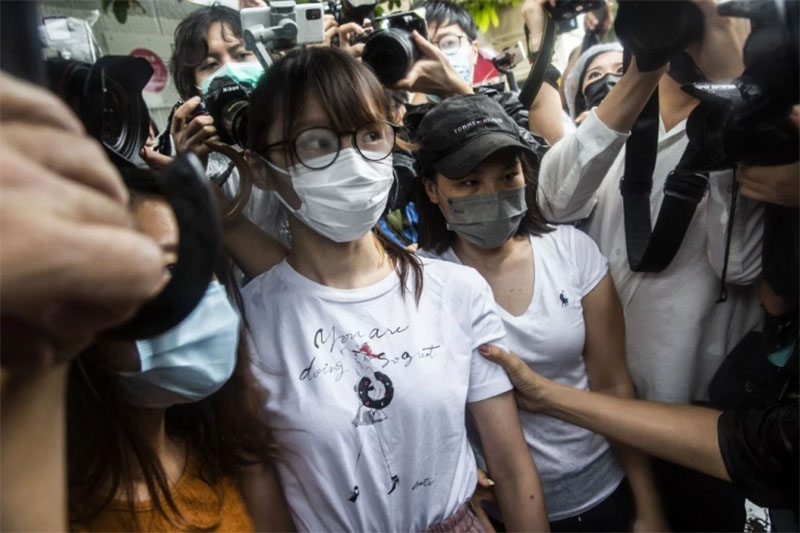 Hong Kong democracy activist Agnes Chow was released Saturday from prison on the second anniversary of the city’s huge democracy rallies, with police out in force and protests now all but banned.

Two thousand officers have been placed on standby after social media calls for residents to commemorate the failed democracy demonstrations.

Authorities have maintained a coronavirus prohibition on public gatherings despite the city recording just three local infections in the last month.

A Beijing-imposed national security law has also criminalised much dissent and most of the city’s democracy leaders have been arrested, jailed or fled overseas.

Chow, 24, was mobbed by waiting media but made no comment as she was driven away.

Supporters shouted “Agnes Chow add oil”, a Cantonese-language expression of encouragement that was widely used at the protests that roiled the city.

Some supporters wore black T-shirts and yellow masks and one held a yellow umbrella, a symbol of protests in the former British colony dating back to 2014.

Chow hails from a generation of activists who cut their teeth in politics as teenagers and became an inspiration for those who chafe under Beijing’s increasingly authoritarian rule.

She spent some seven months behind bars for her role in a 2019 protest outside the city’s police headquarters. Fellow youth activists Joshua Wong and Ivan Lam were sentenced in the same case.

Two years ago on June 12, thousands of protesters surrounded the city’s legislature in an attempt to stop the passage of a bill that could have allowed extraditions to mainland China’s judicial system.

Huge crowds rallied week after week in the most serious challenge to China’s rule since Hong Kong’s 1997 handover.

Beijing’s leaders have dismissed the call for democracy, portraying those who protested as stooges of “foreign forces” trying to undermine China.

They have since overseen a sweeping crackdown that has successfully curbed dissent and radically transformed the once outspoken semi-autonomous city.

The spear tip of that crackdown has been the national security law.

More than 100 people have been arrested under the new law, including Chow, although she has not yet been charged.

After almost 7 months in jail, @chowtingagnes was just released from Tai Lam Centre for Women. She didn’t say anything and the car that picked her up had to leave under police assistance. pic.twitter.com/KAT43AKFrT

Most have been denied bail and they face up to life in jail if convicted.

Protests have been extremely restricted for the last year in Hong Kong, but anniversary events have tended to focus attention.

On Friday, two activists from Student Politicism, a pro-democracy group, were arrested on suspicion of advertising an unauthorised assembly.

However, many in Hong Kong still quietly signalled defiance by turning on mobile phone lights and lighting candles that evening.

Peru’s Castillo on verge of winning presidency after tight race