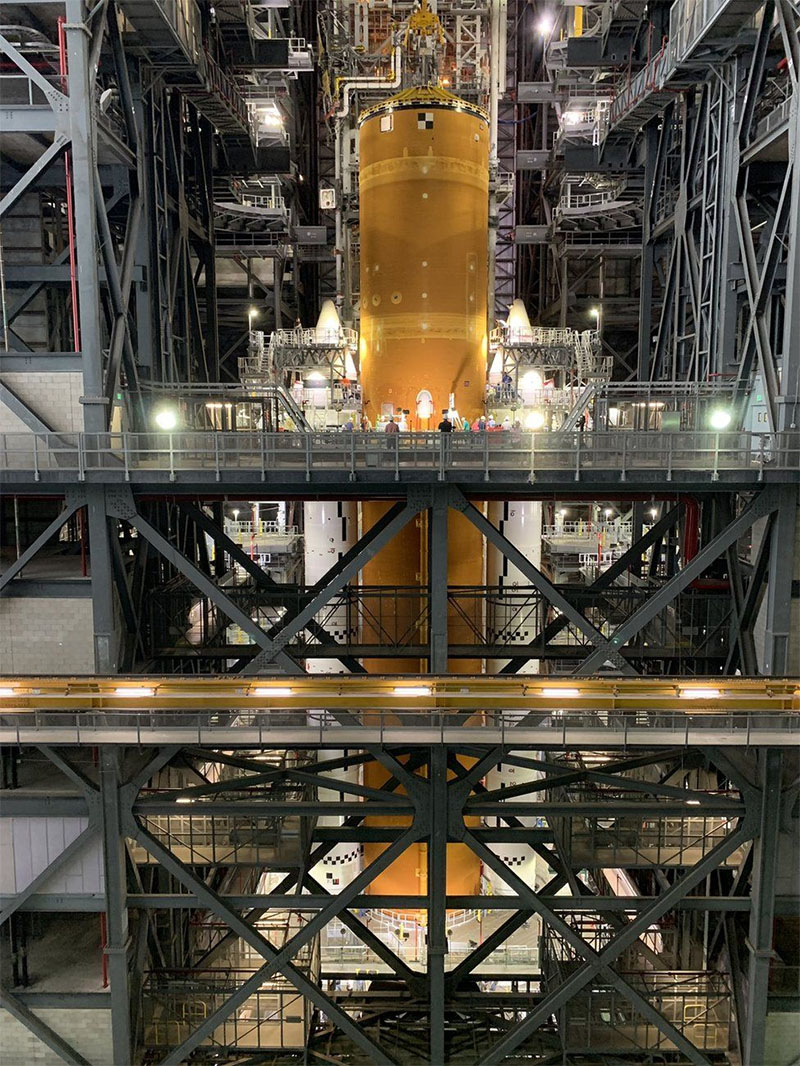 Nasa has assembled the first of its powerful Space Launch System (SLS) rockets, which will carry humans to the Moon this decade.

It’s the first time all three key elements of the rocket have been together in their launch configuration.

Nasa plans to launch the SLS on its maiden flight later this year.

During this mission, known as Artemis-1, the SLS will carry Orion – America’s next-generation crew vehicle – towards the Moon. However, no astronauts will be aboard; engineers want to put both the rocket and the spaceship through their paces before humans are allowed on in 2023.

The SLS consists of the giant core stage, which houses propellant tanks and four powerful engines, flanked by two 54m (177ft) -long solid rocket boosters (SRBs). They provide most of the thrust-force that propels the SLS off the ground in the first two minutes of flight.

Both the core stage and the SRBs are taller than the Statue of Liberty, minus its pedestal.

Over Friday and Saturday, teams at Kennedy Space Center used a heavy-lift crane to first hoist the core stage, transfer it from a horizontal to a vertical position, and then lower it into place between the SRBs on a structure called the mobile launcher.

The mobile launcher allows access to the SLS for testing, checkout and servicing. It will also transfer the giant rocket to the launch pad.

Engineers began stacking the SRBs on the mobile launcher in November last year.

While this was going on, the core stage was attached to a test stand in Mississippi, undergoing a comprehensive programme of evaluation known as the Green Run.

In March, the core stage engines were fired successfully for around eight minutes – the time taken for the SLS to get from the ground to space – in the Green Run’s final and most important test.

After refurbishment, the core was taken by barge to Kennedy Space Center.

Artemis-3, which will be the first mission to land humans on the Moon since Apollo 17 in 1972, should launch in the next few years. Nasa recently awarded the contract to build the next-generation Moon lander to SpaceX, which is adapting its Starship design for the purpose.