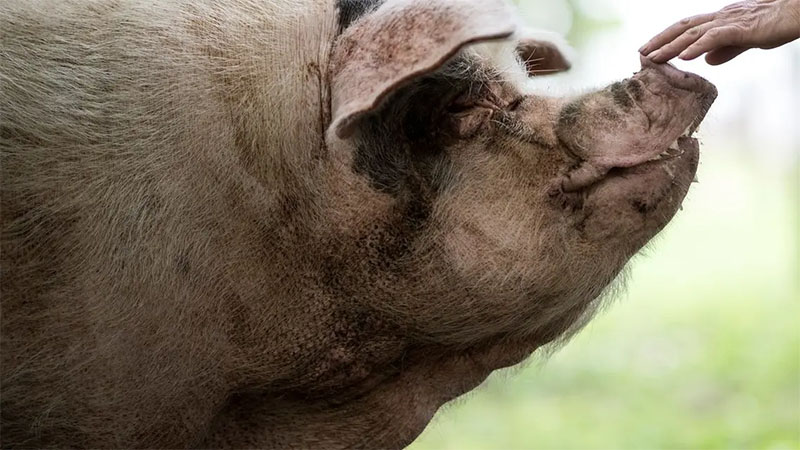 A pig that became an unlikely national icon in China after surviving 36 days under rubble from a powerful 2008 earthquake has died at the age of 14, sparking an outpouring of emotion on Thursday.

“Zhu Jianqiang, ” or “Strong Pig” shot to fame after being discovered alive after the 7.9-magnitude earthquake in southwestern Sichuan province on May 12, 2008.

The earthquake left nearly 90,000 people dead or missing and the pig’s miraculous story, subsisting on a bag of charcoal and rainwater, was hailed as an inspiring symbol of the will to survive.

Witnesses said the young “Zhu Jianqiang” had lost so much weight by the time it was pulled from the rubble that it looked more like a goat.

A local museum near the city of Chengdu had purchased the famous pig for 3,008 yuan ($450) and kept it as a tourist attraction while it lived out its days.

It succumbed to “old age and exhaustion” on Wednesday night, the museum said on China’s Twitter-like Weibo platform.
In human terms, it was 100 years old, The Global Times said, citing its breeder.

The celebrity porker was named China’s animal of the year in 2008 because it “vividly illustrated the spirit of never giving up.”

The Weibo hashtag “Strong Pig died” had drawn nearly 300 million views by mid-day Thursday and was rising fast.
Weibo users hailed it as “the most famous pig in history.”

“It is indeed a strong animal, not just for surviving the earthquake, but also for the 13 years of life afterwards, ” said one popular Weibo post.

Spanish man jailed for killing and eating his mother