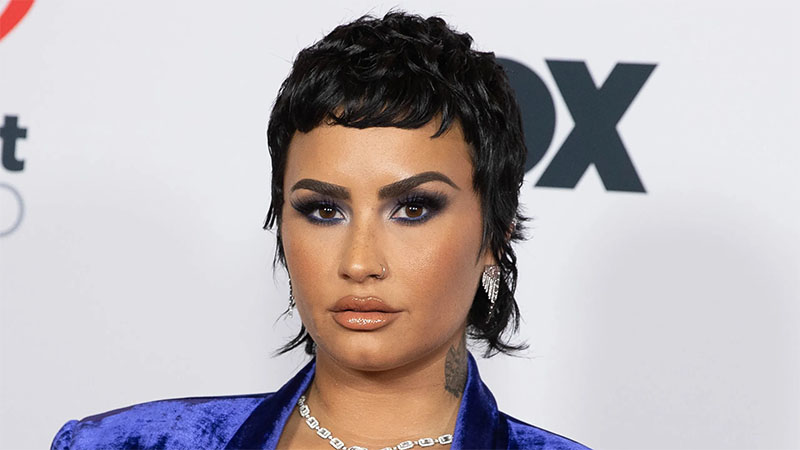 Demi Lovato is adjusting to life with their new pronouns after coming out as non-binary last month. In a new interview with Audacy, Lovato told Ryan Mitchell their “family has done an incredible job” with the pronoun usage.

“My family has done an incredible job… I’ve noticed (Dallas) using them and they and it really does warm my heart up that people are trying,” Lovato shared, adding that their friends haven’t adjusted quite as easily. “My friends have had a little harder time to get used to actually. Just because I think, like, your friends are the ones that you’re more likely to be like, ‘biiiii*ch.’ I’m like, ‘Look, you can still call me bi*ch.'”

During the virtual check-in, Lovato shared that there are times where they have to choose the pronoun they feel most comfortable with in certain circumstances.

“There are times where I might have to choose… I was in Texas, and I was like, ‘Does that make me a Cowboy or a Cowgirl?’ I don’t want to be a Cow Human, so I’m just going to go with Cowgirl,” they explained.

While sometimes Lovato believes their message can get lost in translation, they said their intention is always to come from a good place, especially when it comes to something they are really passionate about.

“I had an experience in May, or April…it was me talking about something I was very passionate about pertaining to the diet culture, and I realized that, because I was so passionate…I let my emotions get the best of me and it didn’t allow me to explain where I was coming from as easily as it would’ve been on a podcast,” Lovato said of the incident.

In a video released after the incident, Lovato said that they “jumped to conclusions” and didn’t intend to use their celebrity to bully a small business, as some critics have claimed.

“I am very outspoken about the things I believe in. I understand that sometimes my messaging can lose its meaning when I get emotional… I’ve lived through enough to know when to speak up for people who don’t have a voice,” Lovato said at the time. “When I messaged this froyo place, originally, I wanted to make a point, and I wanted to call out behaviors or branding, things that didn’t sit right with me. The truth of the matter is, as someone who is in recovery from an eating disorder, I still, to this day, have a hard time walking into a froyo shop, ordering yogurt.”