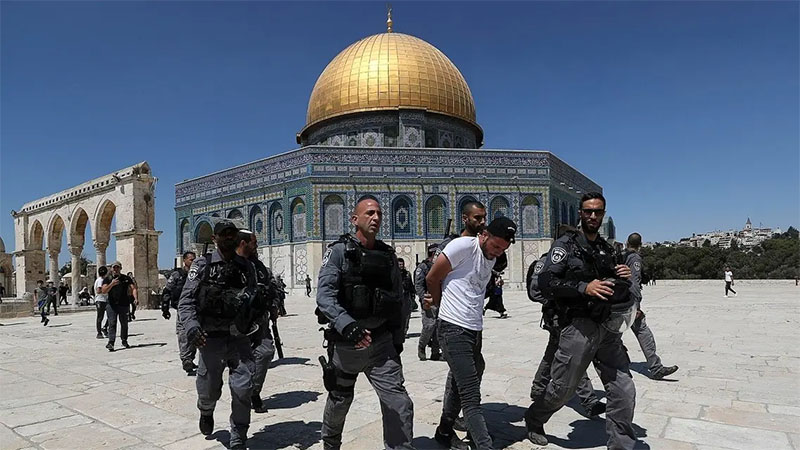 An AFP reporter said about 1,000 people gathered in the compound after weekly prayers crying “God is great” and some hoisting Palestinian flags.

Some demonstrators threw stones at police, who raided the site, an AFP reporter said.

“Several dozen youths began disturbing the order and throwing stones toward police,” police said in a statement, adding that “10 suspects were arrested.”

The Palestinian Red Crescent said nine people were hurt, including three hospitalized in the confrontation, with injuries due to “beatings, rubber and sound bombs.”

The confrontation came after Palestinians protested against Jewish nationalists who had marched through Israel-annexed east Jerusalem on Tuesday, chanting insults to Islam and shouting “Death to Arabs.”

Al-Aqsa is the third holiest site in Islam, and is also revered by Jews as the Temple Mount, where two temples stood in antiquity.

Police confrontations with Muslim worshippers in early May escalated into the bloodiest fighting in years, with conflict erupting between Israel and Palestinian militants in Gaza.

A fragile ceasefire between Israel and Gaza’s Hamas rulers came into place on May 21, ending 11 days of deadly fighting.

The Al-Aqsa compound lies in east Jerusalem, which Israel annexed in 1967, in a move most of the international community does not recognize.

A day earlier, police said they arrested eight people who demonstrated at the Damascus Gate, an entrance to Jerusalem’s Old City, where the nationalist Jewish march had congregated.

Also on Friday, Palestinians protested near Nablus in the occupied West Bank against the expansion of a Jewish settlement on the lands of Beita village.