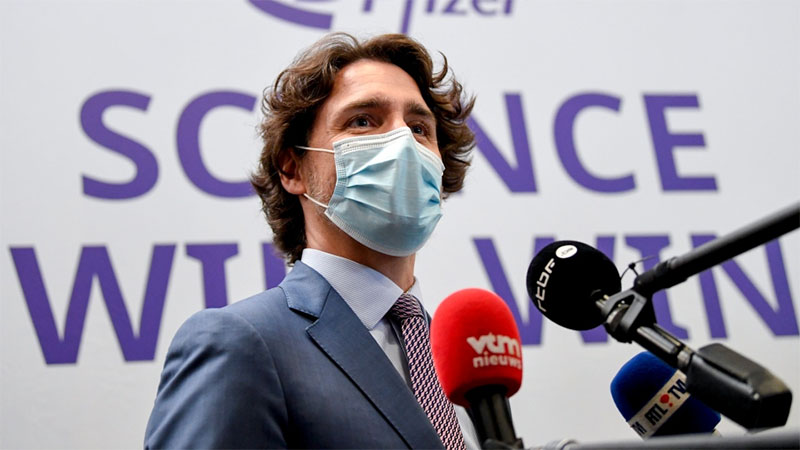 Prime Minister Justin Trudeau now says that, by the end of July, Canada will have received “over 68 million” doses of COVID-19 vaccines, increasing the number of Canadians who will be able to receive their second doses earlier than expected.

Trudeau said Procurement Minister Anita Anand will be outlining the specifics of the coming deliveries later on Friday afternoon. The previous cumulative total for doses the federal government said they expected to see delivered by the end of July was 55 million.

“Canada is getting millions more Moderna doses brought forward from our summer shipment schedule into June, and we’re locking in shipments for the first half of July… And we’re also getting extra doses from the U.S.,” Trudeau said, addressing the country from self-isolation at Rideau Cottage where he is quarantining after his international trip.

“Just like we surpassed our delivery numbers for the first quarter of the year, we’re doing the same for the spring quarter. That will mean that for the end of June, as promised, we’ll be at more than 50 million doses total, and by the end of July, we’ll be over 68 million doses for Canadians.”

The federal government has previously promised a “one-dose summer” and “two-dose fall” with all Canadians who can, and want to be, able to be fully vaccinated by the end of September. With this influx of doses expected over the next several weeks it is possible, pending further delivery delays, that the target date could be moved up.

According to CTV News’ vaccine tracker, as of Friday morning, more than 31 million COVID-19 vaccines have been administered in Canada, with more than 74 per cent of eligible Canadians having received their first dose, and nearly 19 per cent of the eligible population fully vaccinated.

PM TO GET WHICHEVER SHOT OFFERED

Following the National Advisory Committee on Immunization’s latest recommendation that people who received a first dose of the Oxford-AstraZeneca vaccine should receive a second dose of a mRNA vaccine, Trudeau says he’ll take whichever vaccine is offered to him first.

Trudeau received his first AstraZeneca shot in April, and when provinces started limiting the use of the vaccine he had said he still planned to get a second AstraZeneca shot on the advice of his doctor.

“Like many Canadians, I’m looking forward to my second dose, which I hope to get soon after coming out of quarantine in the next few weeks,” he said.

“But as to which dose, I will take whichever dose is offered to me. I will do what all Canadians should do, which is follow the best advice of the experts around them, including NACI and their family doctors, and I will be reassured as all Canadians should be that getting that second dose is the best way through this pandemic.”

Conservative Leader Erin O’Toole, NDP Leader Jagmeet Singh, and many other federal and provincial politicians were among those who received AstraZeneca for their first dose and will soon be due for their second shots.

Trudeau said that any Canadian who received a Health Canada-authorized vaccine “did the right thing,” because “we’re on our way to getting through and into a much better summer because of it.”