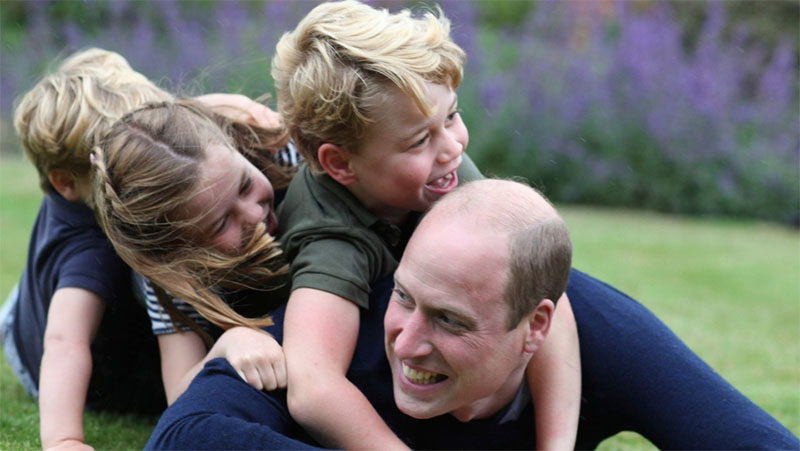 The Duke and Duchess of Cambridge are marking Father’s Day by sharing family photos on social media, including one featuring their three children that was previously unseen.

The photos were part of a six-second Father’s Day video, which shows four family photos pinned to a corkboard.

At the bottom left-hand side of the corkboard, a never-before-seen photo depicts Prince William wearing a ceremonial uniform alongside his three children, George, Charlotte and Louis.

Another photo shows a much younger William sitting on the grass outside the Balmoral estate in Scotland alongside his father, Prince Charles, and his brother, Prince Harry.

The Cambridges also shared a photo of Kate’s father, Michael Middleton, walking her down the aisle during her wedding in 2011.

They also shared a photo of the Queen and the late Prince Phillip alongside seven of their great-grandchildren.

Other royals are also celebrating Father’s Day with family photos. Prince Charles posted photos of himself alongside his father and his two sons, as well as photos of Camilla with her own father, Major Bruce Shand. A photo taken in 1951 featuring Charles as a toddler, Phillip, the Queen and her father, King George VI was also posted to the Royal Family’s social media accounts.​

To all Papas everywhere, and to those who may be missing their Dads today, we are thinking of you and wishing you a special #FathersDay. pic.twitter.com/UtAh4GeUgP

— The Prince of Wales and The Duchess of Cornwall (@ClarenceHouse) June 20, 2021

To all dads everywhere, we wish you a very special Father’s Day.

To mark #FathersDay we are sharing this photograph of The Queen with her father, King George VI, and Prince Philip watching a young Prince Charles sitting on a statue at Balmoral in 1951. pic.twitter.com/CiU249gPuj

Dozens of migrants, including children, rescued off Spain’s Island of Gran Canaria

Qatar to require fans at 2022 World Cup to be vaccinated