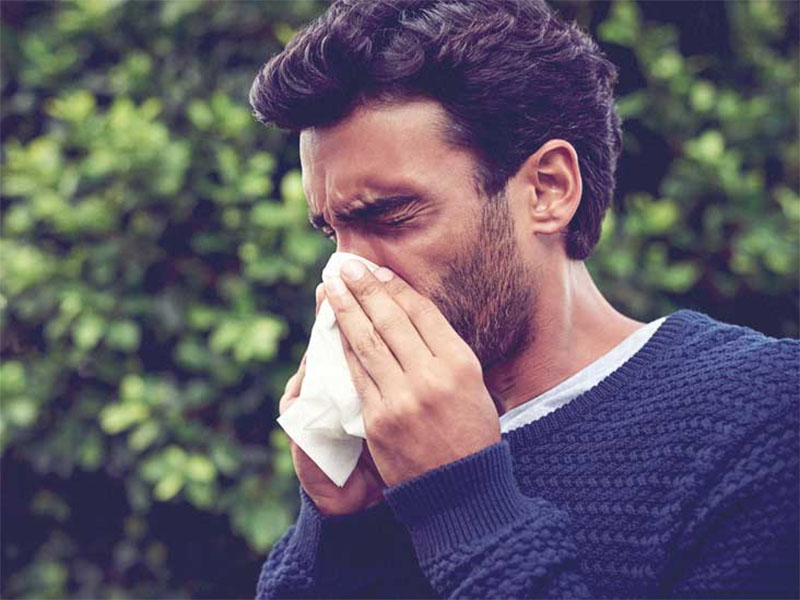 A tickle in the nose can help trigger a sneeze, expelling irritants and disease-causing pathogens. But the cellular pathways that control the sneeze reflex go far beyond the sinuses and have been poorly understood. Now, a team led by researchers at Washington University School of Medicine in St. Louis has identified, in mice, specific cells and proteins that control the sneeze reflex.

“Better understanding what causes us to sneeze — specifically how neurons behave in response to allergens and viruses — may point to treatments capable of slowing the spread of infectious respiratory diseases via sneezes,” said Qin Liu, PhD, an associate professor of anesthesiology and the study’s senior investigator.

The findings are published June 15 in the journal Cell.

“We study the neural mechanism behind sneezing because so many people, including members of my own family, sneeze because of problems such as seasonal allergies and viral infections,” said Liu, a researcher in the university’s Center for the Study of Itch and Sensory Disorders. “Our goal is to understand how neurons behave in response to allergies and viral infections, including how they contribute to itchy eyes, sneezing and other symptoms. Our recent studies have uncovered links between nerve cells and other systems that could help in the development of treatments for sneezing and for fighting infectious respiratory diseases.”

Sneezing is the most forceful and common way to spread infectious droplets from respiratory infections. Scientists first identified a sneeze-evoking region in the central nervous system more than 20 years ago, but little has been understood regarding how the sneeze reflex works at the cellular and molecular level.

In the new study, Liu and her team established a mouse model in an attempt to identify which nerve cells send signals that make mice sneeze. The researchers exposed the mice to aerosolized droplets containing either histamine or capsaicin, a pungent compound made from chili peppers. Both elicited sneezes from the mice, as they do in people.

By examining nerve cells that already were known to react to capsaicin, Liu’s team was able to identify a class of small neurons linked to sneezing that was caused by that substance. The researchers then looked for molecules — called neuropeptides — that could transmit sneeze signals to those nerve cells, and found that a molecule called neuromedin B (NMB) was required for sneezing.

Conversely, when they eliminated the NMD-sensitive neurons in the part of the nervous system that evoked sneezes in the mice, they blocked the sneeze reflex. Those neurons all make a protein called the neuromedin B receptor. In mice without that receptor, sneezing again was greatly reduced.

“Interestingly, none of these sneeze-evoking neurons were housed in any of the known regions of the brainstem linked to breathing and respiration,” Liu said. “Although we found that sneeze-evoking cells are in a different region of the brain than the region that controls breathing, we also found that the cells in those two regions were directly connected via their axons, the wiring of nerve cells.”

The researchers also found they could stimulate the sneeze reflex by exposing part of the mouse brain to the NMB peptide. Further, the animals began to sneeze even though they had not been exposed to any capsaicin, histamine or other allergens.

Because many viruses and other pathogens — including the majority of human rhinoviruses and coronaviruses such as Middle East respiratory syndrome coronavirus (MERS-CoV) and SARS-CoV-2, the coronavirus that causes COVID-19 — are spread in part by aerosolized droplets, Liu said it may be possible to limit the spread of those pathogens by targeting NMB or its receptor to limit sneezing in those known to be infected.

“A sneeze can create 20,000 virus-containing droplets that can stay in the air for up to 10 minutes,” Liu explained. “By contrast, a cough produces closer to 3,000 droplets, or about the same number produced by talking for a few minutes. To prevent future viral outbreaks and help treat pathological sneezing caused by allergens, it will be important to understand the pathways that cause sneezing in order to block them. By identifying neurons that mediate the sneeze reflex, as well as neuropeptides that activate these neurons, we have discovered targets that could lead to treatments for pathological sneezing or strategies for limiting the spread of infections.”

Materials provided by Washington University School of Medicine. Original written by Jim Dryden. Note: Content may be edited for style and length.