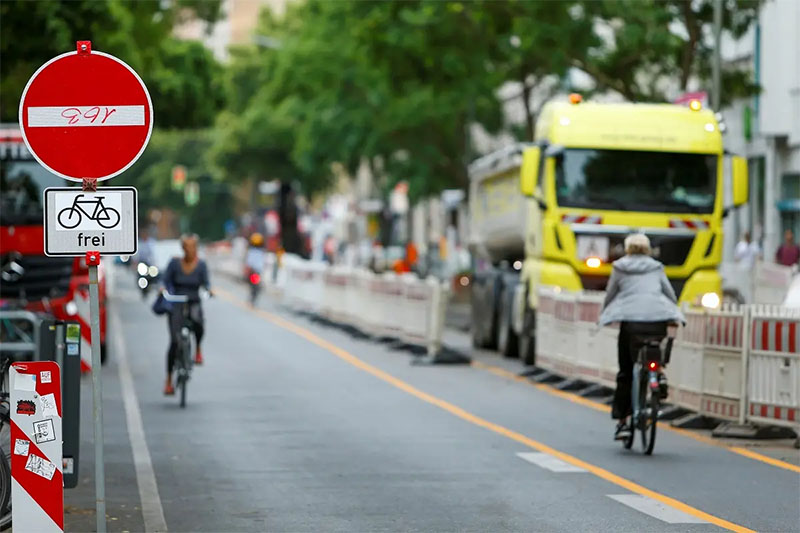 Berlin is making permanent the extra bike lanes it added during coronavirus lockdowns as it seeks to support the cycling boom that started in the pandemic.

The German capital has marked about 25 km (15 miles) of extra “pop-up” bike lanes since COVID-19 hit in 2020 as commuters switched to cycling to avoid crowded public transport.

Other European cities — like Paris and London — have also been adding bike paths.

In some parts of Berlin, temporary lanes — often marked by yellow tape stuck on the road — are now being made permanent, widened and better protected, with bollards or low ramps to stop cars or vans blocking them.

The district of Friedrichshain-Kreuzberg, which came up with the idea of the “pop-up” lanes, formally opened a new stretch of
bike lane on Monday and began work on making another busy street only accessible by bikes and pedestrians.

The German Cyclists Association (ADFC) says bike traffic rose by 25 percent in Berlin due to the temporary lanes and the pandemic.

It has welcomed making the lanes permanent but says more needs to be done to protect cyclists in Berlin, where five have
already been killed this year.

Berlin is currently ruled by the center-left Social Democrats, with the Greens and the left-wing Linke party.

Promoting more environmentally-friendly mobility is expected to be a major topic in the September federal election.

Opinion polls suggest the Greens, who want more investment in cycling and public transport, are trailing behind Chancellor
Angela Merkel’s Christian Democrats, seen as close to the country’s car lobby.