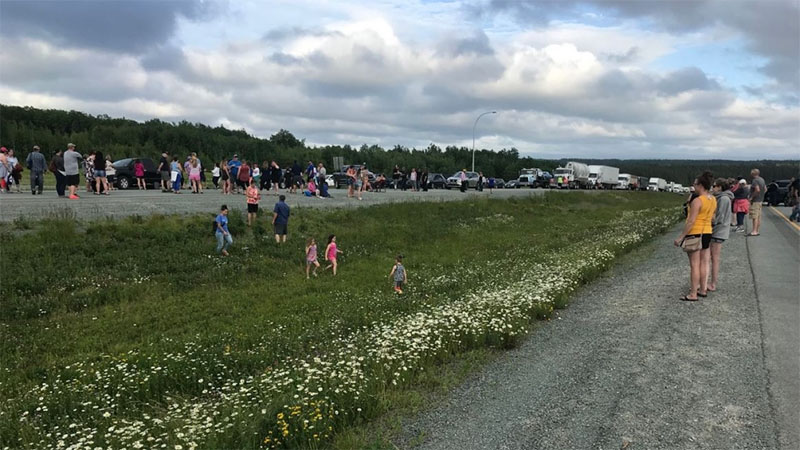 Dozens of people blocked traffic in both directions of the Trans-Canada Highway on Monday night to protest Nova Scotia’s restrictions on travellers from New Brunswick.

Protesters say they’re frustrated with Nova Scotia’s last-minute decision to open up to all three Atlantic provinces, but require anyone entering the province from New Brunswick to self-isolate.

How long travellers have to self-isolate depends on how many doses they’ve received and the results of a negative test.

“I don’t have the capability of going there, coming back, and isolating,” said Norma Estabrooks.

The protest was designed to force the Nova Scotia government to change the border restrictions for travellers from New Brunswick.

After New Brunswick’s decision to re-open to the rest of the country, Nova Scotia brought in quarantine requirements for people coming in from New Brunswick.

Nova Scotia RCMP say that Highway 104 at Exit 7 was closed in both directions because of the protest. The section between Thomson Station, N.S. and the Cobequid Pass toll booth.

“Traffic is being diverted through Exit 7 onto Highway 4,” the Mounties said in a news release Tuesday afternoon. “The RCMP is asking the public to avoid unnecessary travel and to use caution driving in the area.”

The protesters said they would stay on the highway until Nova Scotia changes the restrictions. As of 11:37 p.m. Tuesday, they were still there and the highway was closed according to a news release from Nova Scotia RCMP.

B.C. study touts school COVID safety, but authors are ‘conscious of its limitations’