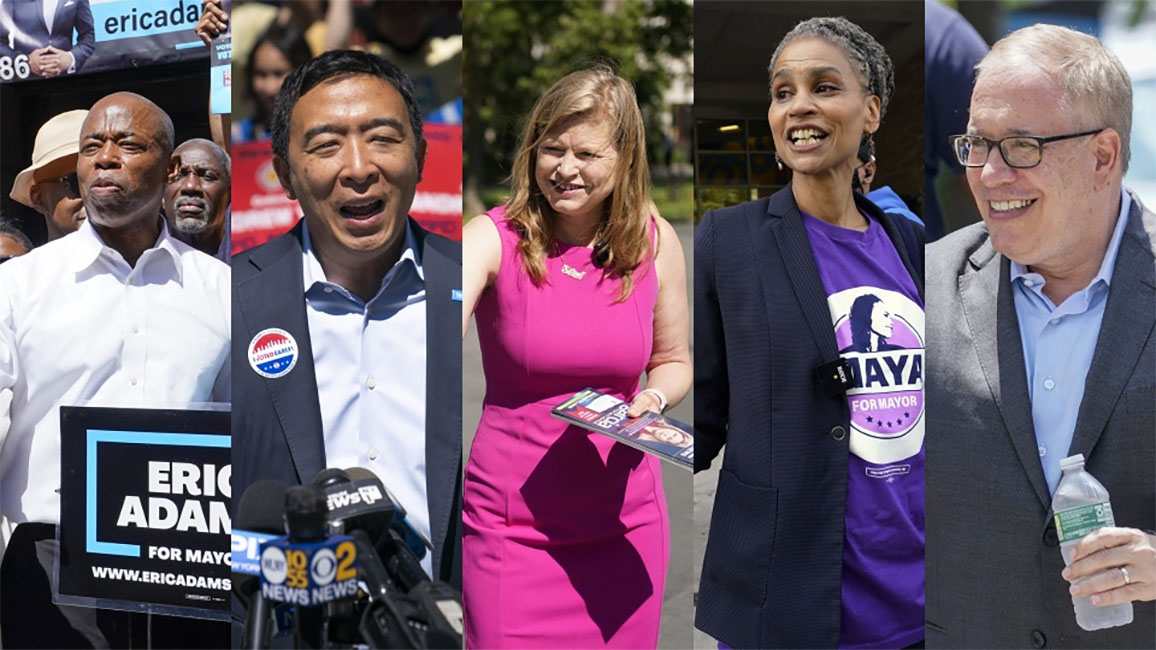 The votes are in. The polls are closed. But the top contenders may have a long, anxious wait ahead of them for accurate results in New York City’s mayoral primary, the first citywide election to use ranked choice voting.

Several candidates in the race to succeed Mayor Bill de Blasio have the potential to make history if elected. The city could get its first female mayor, or its second Black mayor, depending on who comes out on top.

Former presidential candidate Andrew Yang, who was far behind in early returns, conceded about two hours after polls closed and vowed to work with the next mayor.

But with the debut of the ranked voting system and a mountain of absentee ballots still at least a week away from being counted, it could be July before a winner emerges in the Democratic contest.

“This has been an amazing journey,” Adams told reporters after voting in Brooklyn, emotionally recounting how his path into both law enforcement and politics began at age 15, when he was beaten by police officers. “A little boy, laying on the floor of the 103rd Precinct, assaulted by cops, now could become the mayor to be in charge of that same police department.”

In the Republican primary, Guardian Angels founder Curtis Sliwa defeated businessman Fernando Mateo. Ranked choice voting wasn’t a factor because there were only two candidates in the race.

But in the Democratic contest, the initial picture could be misleading. After polls closed at 9 p.m., New York City’s Board of Elections began releasing results of votes cast in person, but that initial picture will only include data on who candidates ranked as their first choice.

The ranked choice system, approved for use in New York City primaries and special elections by referendum in 2019, allowed voters to rank up to five candidates on their ballot.

Vote tabulation is then done in computerized rounds, with the person in last place getting eliminated each round, and ballots cast for that person getting redistributed to the surviving candidates based on voter rankings. That process continues until only two candidates are left. The one with the most votes wins.

It won’t be until June 29 that the Board of Elections performs a tally of those votes using the new system. It won’t include any absentee ballots in its analysis until July 6, making any count before then potentially unreliable.

More than 87,000 absentee ballots had been received by the city as of Monday, with more expected to arrive in the mail over the next few days.

Stringer, McGuire and Morales addressed supporters after polls closed as early returns showed them trailing the front-runners but did not immediately concede.

De Blasio, a Democrat, leaves office at the end of the year due to term limits.

The candidates traveled around the city Tuesday doing a last round of campaigning.

Wiley was losing her voice greeting voters near her polling place in Brooklyn. Garcia campaigned up in the Bronx, while Sliwa and Stringer bumped into each other campaigning in Manhattan.

“If you want your city to work for us and our families, you have got to get out and vote,” he said after voting in Manhattan.

Concern over a rise in shootings during the pandemic has dominated the mayoral campaign in recent months, even as the candidates have wrestled with demands from the left for more police reform.

As a former officer, but one who spent his career fighting racism within the department, Adams may have benefited most from the policing debate.

He denounced the “defund the police” slogan and proposed reinstating a disbanded plainclothes unit to focus on getting illegal guns off the streets.

Wiley and Stringer, battling for progressive votes, both said they would reallocate a portion of the police department’s budget to other city programs.

Yang and Garcia formed an alliance in the campaign’s last days in an apparent effort to use the ranked voting system to block Adams. The two held several joint campaign events, with Yang asking his supporters to rank Garcia as their No. 2 — though Garcia did not quite return the favor, not telling her voters where to rank Yang. Adams accused his two rivals of purposely trying to block a Black candidate.

Sliwa does not have much of a chance to win the November general election in a city where registered Democrats outnumber Republicans by 7 to 1.

Former allies, the two Republicans Sliwa and Mateo traded personal insults and tried to shout over each other during one debate on Zoom.

Sliwa, a radio host who still wears his red Guardian Angels beret when he appears in public, got an endorsement from former Mayor Rudy Giuliani, who called him “my great friend” in a robocall to Republican voters.

Flanked by Giuliani at his victory party, Sliwa promised a general election campaign focused on crime. “This is going to be a campaign clearly in which I talk about cracking down on crime, supporting the police, refunding our heroes the police, hiring more police, taking the handcuffs off the police and putting it on the criminals, and restoring qualified immunity to the police so that they can’t be personally sued,” he said.

Blinken at talks urges withdrawal of foreign forces from Libya