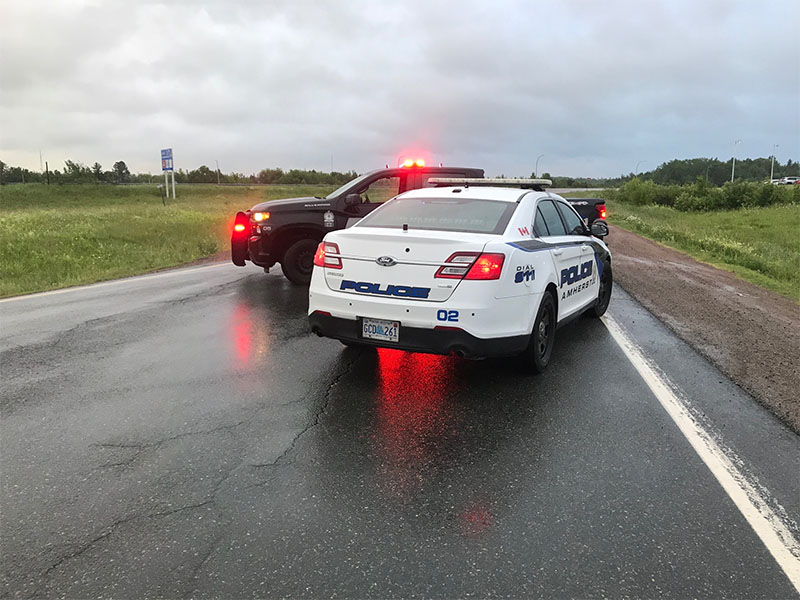 The border between Nova Scotia and New Brunswick remains blocked in both directions on Wednesday afternoon, as residents on both sides of the border continue to protest Nova Scotia’s restrictions on travellers from New Brunswick.

As of Wednesday afternoon, the Trans-Canada Highway remains closed to traffic, with vehicles and protesters blocking the east and westbound lanes near the Nova Scotia Visitor’s Centre, as the protest has moved closer to the N.S./N.B. border.

During a live news conference on Wednesday, New Brunswick Premier Blaine Higgs encouraged protesters at the border to end the blockade, saying this isn’t the time to lose control or patience.

“This is a time that we exercise restraint, we keep moving in a direction that’s getting us back to life as normal… We are on the cusp here of getting back to green,” said Higgs.

Higgs says he has a meeting scheduled with the Atlantic premiers Wednesday afternoon to discuss the issues around the border and hopes to come to a mutual solution.

“I am confident, once they understand what we’re doing and have been doing for 16 months to protect the entire Atlantic region hasn’t changed,” said Higgs. “We are very comfortable with the recommendations of public health, we’re very comfortable with the capabilities that they’ve demonstrated throughout the entire pandemic and I’ve never been more confident in our path forward as New Brunswickers, and as an Atlantic region, as we work together.”

The Trans-Canada is still blocked this morning but protest has moved to the NS/ NB border. This picture was taken at the on ramp leading to the highway at exit 4 in Amherst. @CTVAtlantic pic.twitter.com/ZsVQaBdxQa

Protesters say they are letting essential workers such as nurses, doctors or people who need medical treatment through.

Government officials in Nova Scotia are closely monitoring issues related to a blockade on Highway 104, near the border with New Brunswick because it is “disrupting the movement of important goods and services and could put individuals at risk,” the province said in a news release.

The province’s Emergency Management Office is aware of how the blockade is affecting the supply chain of vital goods such as refrigerated trucks carrying perishable foods that could spoil if they run out of fuel, medication to pharmacies, propane supplies for industrial customers, wholesale food deliveries to restaurants, and feed to farmers for their livestock.

“The longer this goes on the more risk there is that someone might not be able to get something they need,” said Inclusive Economic Growth Minister Labi Kousoulis. “There are workers who need to cross the border daily for their jobs, business owners depending on shipments for their livelihoods and trucks filled with hundreds of thousands of dollars worth of seafood exports. The situation needs to end as soon as possible.”

The blockade has also disrupted health-care services at the Cumberland Regional Health Centre, including the cancellation of more than 100 appointments for important services such as prenatal, services for children with autism and pacemaker care, the province said in a news release. It has also disrupted vital home care for residents in Cumberland County and stopping fragile test samples for children with life-threatening conditions coming from New Brunswick and Prince Edward Island from arriving at the IWK Health Centre in Halifax.

RCMP say they are trying to peacefully get Highway 104 reopened.

“At the very least one lane to start with. And then working from there to get the highway fully reopened,” said Cpl Chris Marshall, Public Information Officer with Nova Scotia RCMP.

Marshall said RCMP has brought in more resources Wednesday morning to begin a dialogue to get the highway reopened. He said protesters have a Charter-protected right to peacefully assemble but also said it’s illegal to block a highway.

“On one hand, every single one of us have the right to protest but you can’t block a highway. That’s a criminal offence so it’s very much a balancing act,” Marshall said.

RCMP have been at the “illegal blockade” since Tuesday night. Marshall said officers were brought in to both keep the peace and maintain order. Some members are directing drivers to turn around.

“Under S.423(1)(g) of the Criminal Code, blockading a highway is a criminal offence,” the RCMP said in a news release. “We are also aware that the ongoing blockade has caused many disruptions on both sides of the border to individuals, businesses and vital services such as health care. We are prepared to change our approach if our dialogue with the protestors is not productive.”

I’m now at border where a few cars and trucks have blocked the highway in both directions on the Trans-Canada the morning NS is set to let ppl coming from NFLD and PEI in with no restrictions but people Coming from N.B. do have restrictions @CTVAtlantic pic.twitter.com/7GaGEjJjrd

Protesters say they’re frustrated with Nova Scotia’s last-minute decision to open up to all three Atlantic provinces, but require anyone entering the province from New Brunswick to self-isolate, following New Brunswick’s decision to reopen to the rest of country.

As of 8 a.m. on Wednesday, travellers from Prince Edward Island or Newfoundland and Labrador can enter Nova Scotia for any reason and will no longer have to self-isolate or complete the Nova Scotia Safe Check-in form.

“The border should be open. It should’ve been open for a long time. No reason why Rankin doesn’t open the border,” said Brad Ross, who has been parked on the highway since before midnight.

Ross was at the protest along Highway 104 near Thomson Station Tuesday afternoon as well, along with dozens of others.

“We’re just trying to prove our point. This COVID thing is out of control,” Ross said.

“We’re here to protest this decision for keeping the border closed again,” said Jeremiah Seitl, another protester who spent the night blocking the highway. “How is it that P.E.I. can travel unrestricted through New Brunswick but we can’t travel into New Brunswick, Sackville, places like that to see our families?”

“I don’t have the capability of going there, coming back, and isolating,” added protester Norma Estabrooks.

The protest began Tuesday afternoon on Highway 104 at Exit 7, closing the section between Thomson Station, N.S. and the Cobequid Pass toll booth, but has since moved closer to the border between the provinces.

The protesters say they plan to stay on the highway until Nova Scotia changes the restrictions.

The blockade continues on the NS/NB. Border. Protesters have shut down Hwy 104. The blockade went up last night because of a decision by the NS Govt to place last minute restrictions on travellers from NB into NS.@CTVAtlantic pic.twitter.com/xUaLH0CVHB