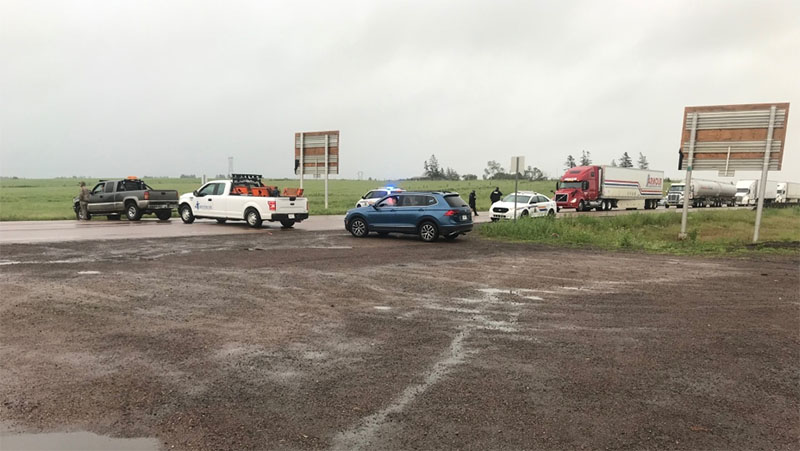 The border between Nova Scotia and New Brunswick remains blocked in both directions on Wednesday morning, as residents on both sides of the border continue to protest Nova Scotia’s restrictions on travellers from New Brunswick.

As of Wednesday morning, the Trans-Canada Highway remains closed to traffic, with three vehicles blocking the east and westbound lanes near the Nova Scotia Visitor’s Centre, as the protest has moved closer to the N.S./N.B. border, with traffic being diverted to N.S. exit 4.

The Trans-Canada is still blocked this morning but protest has moved to the NS/ NB border. This picture was taken at the on ramp leading to the highway at exit 4 in Amherst. @CTVAtlantic pic.twitter.com/ZsVQaBdxQa

Protesters say they’re frustrated with Nova Scotia’s last-minute decision to open up to all three Atlantic provinces, but require anyone entering the province from New Brunswick to self-isolate, following New Brunswick’s decision to reopen to the rest of country.

As of 8 a.m. on Wednesday, travellers from Prince Edward Island or Newfoundland and Labrador can enter Nova Scotia for any reason and will no longer have to self-isolate or complete the Nova Scotia Safe Check-in form.

“The border should be open. It should’ve been open for a long time. No reason why Rankin doesn’t open the border,” said Brad Ross, who has been parked on the highway since before midnight.

Ross was at the protest along highway 104 near Thomson Station Tuesday afternoon as well, along with dozens of others.

“We’re just trying to prove our point. This COVID thing is out of control,” Ross said.

“We’re here to protest this decision for keeping the border closed again,” said Jeremiah Seitl, another protester who spent the night blocking the highway. “How is it that P.E.I. can travel unrestricted through New Brunswick but we can’t travel into New Brunswick, Sackville, places like that to see our families?”

Protesters say they are letting essential workers such as nurses, doctors or people who need medical treatment through.

RCMP units from Nova Scotia and New Brunswick are on scene. N.S. RCMP said the following in a news release issued at 11:37 p.m. Tuesday,

“The Cumberland District RCMP wishes to advise the public that Highway 104 at the Nova Scotia/New Brunswick border has been closed in both the East and West bound lanes due to a protest of recent Covid-19 border restrictions. RCMP units from Nova Scotia and New Brunswick are on scene. Traffic is being diverted at this time. The RCMP is asking the public to avoid unnecessary travel and to use caution driving in the area.”

I’m now at border where a few cars and trucks have blocked the highway in both directions on the Trans-Canada the morning NS is set to let ppl coming from NFLD and PEI in with no restrictions but people Coming from N.B. do have restrictions @CTVAtlantic pic.twitter.com/7GaGEjJjrd

“I don’t have the capability of going there, coming back, and isolating,” added protester Norma Estabrooks.

The protest began Tuesday afternoon on Highway 104 at Exit 7, closing the section between Thomson Station, N.S. and the Cobequid Pass toll booth, but has since moved closer to the border between the provinces.

“Traffic is being diverted through Exit 7 onto Highway 4,” the Mounties said in a news release Tuesday afternoon. “The RCMP is asking the public to avoid unnecessary travel and to use caution driving in the area.”

The protesters say they plan to stay on the highway until Nova Scotia changes the restrictions.