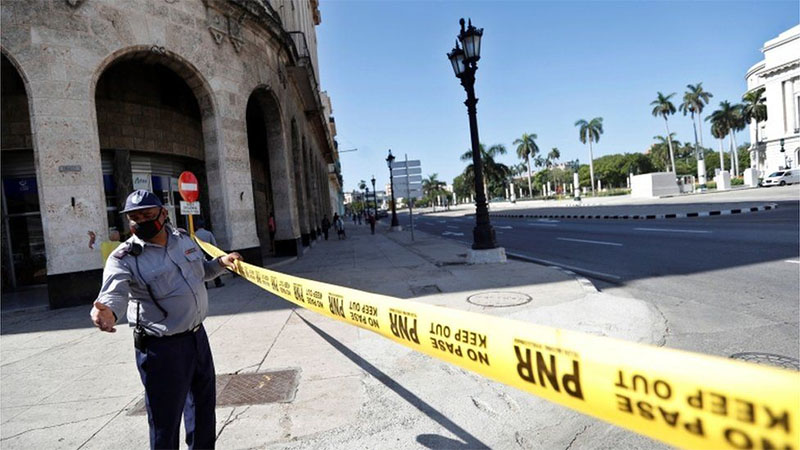 One man has died during rare anti-government demonstrations in Cuba that have shaken the island in recent days.

Diubis Laurencio Tejeda, 36, died in a suburb of Havana on Monday during a clash between protesters and police.

According to the interior ministry, he was part of a group that attacked a government facility. It says some demonstrators were arrested.

But witnesses say the security forces attacked people who had taken to the streets to protest.

The rare nationwide anti-government demonstrations began on Sunday, when thousands began protesting over food and medicine shortages, price hikes and the government’s handling of the Covid-19 epidemic. Such unauthorised public gatherings are illegal in Cuba.

His government has sought to blame the United States, and its economic sanctions, for both the protests and Cuba’s wider problems.

As yet there is no official explanation for how Diubis Laurencio Tejeda died.

State media said he had been involved in “disturbances” in the La Guinera neighbourhood of Havana on Monday, where a group allegedly attacked a government facility. It reported that several others had been injured, including members of the security forces.

In a statement on Tuesday, the interior ministry accused demonstrators of vandalism, setting fires and attacking the police as well as civilians.

But witnesses have said the security forces attacked peaceful protesters who joined a spontaneous demonstration in the neighbourhood.

Waldo Herrera, who lives in the area, told Reuters news agency officers had drawn their guns and started shooting at the demonstrators.

“I think the Communists have lost control, they won’t have a solution to this situation,” he said.

On Tuesday, the police were out in force on the streets. More than 100 people have been arrested and many relatives are looking for information on their whereabouts.

A woman asking about her 21-year-old son at a Havana police station told the AFP news agency he had been taken from his home, “handcuffed and beaten”. She added: “They took many from the neighbourhood, young and old.”

A young man, who only gave his name as Carlos Alberto and was contacted by phone by the BBC, said he was hiding at his girlfriend’s home after taking part in a demonstration.

“I’m afraid the same thing could happen to me,” he said. “We’re just asking for freedom and with this attitude they’re showing what they are: a dictatorship.”

What’s behind the protests?

The unrest began with a demonstration in the city of San Antonio de los Baños, south-west of Havana, but it soon spread throughout the country.

Posts on social media showed people overturning police cars and looting state-owned shops that price their goods in foreign currencies. For many Cubans, these shops are the only way they can buy basic necessities but prices are high.

The demonstrations appear to be the result of societal exhaustion stemming from various economic and health crises, analysts say. The pandemic and economic measures taken by the government have made life in Cuba increasingly difficult.

There have been reports of internet blackouts across the island. Cuba rolled out access to mobile internet in December 2018, but it is controlled by the state.

The Cuban journalist Camila Acosta, who writes for the Spanish newspaper ABC, is among those who have been detained.

Spanish Foreign Minister José Manuel Albares called for her immediate release in a tweet on Tuesday, and asked Cuba to respect people’s right to demonstrate “freely and peacefully”.