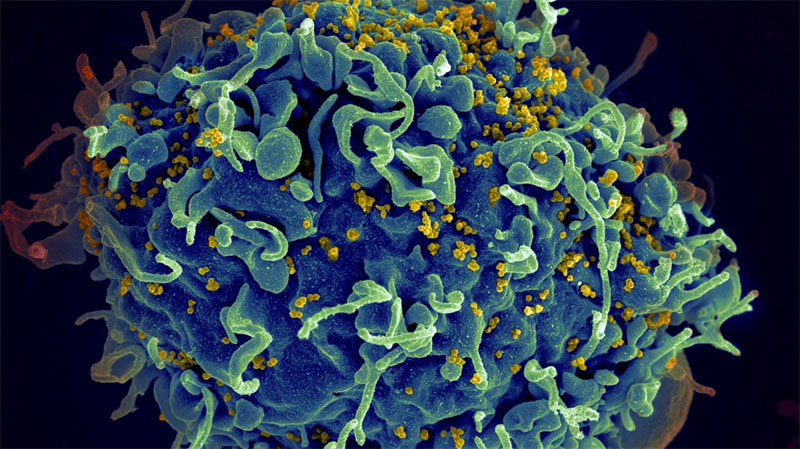 Researchers at the University of Oxford in England are trialling a potential breakthrough vaccine for HIV that they hope could also serve as a cure for infected individuals.

The clinical trial, known as HIV-CORE 0052, will test the HIVconsvX vaccine. University of Oxford professor Tomas Hanke says the vaccine is a “mosaic,” capable of targeting a range of HIV-1 variants

He told CTV’s Your Morning on Tuesday that if successful, the trial could open up the possibility that this single vaccine could be used across the globe.

“Most of the field has been focusing on protection through the use of broadly neutralizing antibodies. Our vaccine aims to use killer T cells,” Hanke said.

While most HIV vaccine candidates work by generating antibodies from B cells, Hanke explained that HIVconsvX uses the immune responses from T cells, a type of white blood cell that can kill virus-infected or cancerous cells, to target the most vulnerable regions of HIV.

“When [the] virus gets into the body, it infects cells, and they start to produce more of the viruses and spread the infection, and our killer T cells are going to kill these virus factories in the bodies before it can hopefully establish a generalized infection,” Hanke said.

Alternatively, Hanke said the vaccine could slow the virus down and help the broadly neutralizing antibodies generated by B cells, together with the killer T cells, to stop the infection.

According to the university, the trial will assess the HIVconsvX vaccine’s safety, tolerability, and immunogenicity.

The trial involves 13 healthy, HIV-negative adults aged 18 to 65 in the U.K. who are not considered to be at a high risk of infection. The participants will receive one dose of the vaccine and will get a booster shot at four weeks.

Not only are researchers at Oxford testing if the vaccine can prevent infection in HIV negative individuals, but the “complex program” also aims to evaluate whether the drug could be used in HIV positive individuals as a cure.

Hanke said future trials will also look at combining the vaccine with other, antiviral drugs in an attempt to “establish control of the virus in the body.”

According to UNAIDS, 37.6 million people globally were living with HIV in 2020. Of these, 35.9 million were adults and 1.7 million were children under 15 years old.

While an effective HIV vaccine has been elusive for 40 years, Hanke acknowledged that certain treatments have made the quality of life better for those suffering from HIV.

“It’s not a death sentence anymore; [medications] have changed this disease into a chronic infection,” he said.

However, Hanke noted that there are downsides to these treatments.

“Antiviral treatment doesn’t get rid of the virus, and it has to be used for the rest of the life and this magnifies all the medical side effects that these drugs may have,” Hanke said.

Hanke said there is a social stigma that comes with those who use these treatments, and there are issues of adherence and affordability with taking a daily medication, especially for those with HIV in poorer countries.

“Even in the context of using these antiviral drugs as prevention, vaccine is still the best and most economical solution and likely a key component of any strategy to end the epidemic,” Hanke said.

Oxford researchers anticipate results from the trial, which is part of the European Aids Vaccine Initiative, will be reported by April 2022.