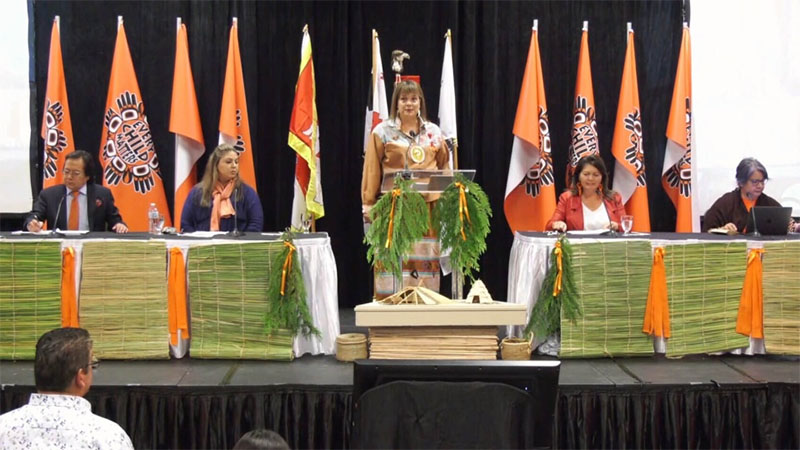 A specialist in ground-penetrating radar says there are still nearly 650,000 square metres of land to be surveyed before the total number of unmarked graves is confirmed at the site of Canada’s largest residential school.

Sarah Beaulieu, a professor at the University of the Fraser Valley, released her initial findings from the site in B.C.’s Interior during a news conference Thursday hosted by the Tk’emlups te Secwepmc First Nation.

Her search of an area on the grounds of the Kamloops Indian Residential School identified 200 of what she called remaining “targets of interest,” which may be graves.

Beaulieu said it can challenging to know whether it is a grave, prior to exhumation, when there is no casket.

The area searched once held an apple orchard, and was chosen for the initial search in part because of the discovery of a child’s rib bone.

Additionally, survivors of schools described children as young as six being woken up during the night and asked to dig graves in the orchard.

She said those factors, combined with the discovery in the area of a youth’s tooth during a test dig at the site, helped determine the 7,000 square metres involved in the study.

The update comes months after it was announced that graves holding what appeared to be the remains of 215 children had been discovered through the use of ground-penetrating radar.

Beaulieu, whose experience includes using ground-penetrating radar to find unmarked prisoner of war graves, said there are still 160 acres, or about 647,500 square metres, left to search at the site.

She said only a forensics investigation, which would include excavation, would determine the true number of children buried on the school grounds.

In introducing Thursday’s announcement, Kukpi7 (Chief) Rosanne Casimir thanked those whose stories made the discovery possible by “carrying a burden of truth forward” so that truth could be confirmed by science.

“This is heavy truth,” she said.

“It has been referred to as a historic dark chapter but Indigenous people are very much alive with the repercussions that they’re living today.”

Casimir said the Tk’emlups te Secwepmc First Nation has the responsibility to identify the children buried at the site, but in order to move forward, it needs records of those who attended the school.

She called on the federal government to release attendance records, which she said would help experts identify the children at the site.

She also called on the Oblates of Mary Immaculate, a Catholic missionary that operated many of Canada’s residential schools, to release what records it has.

“We are loathe to put the responsibility of identifying those lost on the survivors of Kamloops Indian Residential School, who have been traumatized and re-traumatized already.”

Also speaking at the news conference, the president of the Canadian Archaeological Association said it’s important to remember that the Kamloops school is only one of 139 schools in the system.

“We also know that there were other schools – day schools and residential schools… so talking clearly about thousands and thousands of missing children,” Lisa Hodgetts said.

Since that time, similar discoveries have been announced by other First Nations in Canada, including in Saskatchewan and elsewhere in B.C..

In the Prairies, the Cowessess nation reported finding 751 potential graves in June. Earlier this week, the Penelakut Tribe said it had found another 160 undocumented graves near Chemainus, B.C.

Near the site of a former residential school in Cranbrook, B.C., 182 unmarked graves were found.

Casimir said the goal of announcing these findings is to honour those children whose fates remain unknown.

“We are not here for retaliation. We are here for truth-telling… We are mapping a way forward to bring peace to those missing children, their families and their communities,” the chief said.

Canada’s residential school system was initiated in the 1820s, and was in place for decades. The last of the schools remained open until 1997.

“The establishment and operation of residential schools were a central element of (Canada’s Aboriginal policy), which can best be described as ‘cultural genocide,'” the document reads.

The TRC says it has identified more than 4,100 children who died of disease or accident while attending residential schools.

Many of those who survived described physical, mental and sexual abuse. Read more from the TRC’s findings here, including detailed accounts from survivors.

A full report on missing children from 2015 also contains more information on the school system.

Much of what was uncovered during the TRC investigations was already known to Indigenous communities through oral histories, but was not part of Canadian school curriculums.

Many non-Indigenous Canadians expressed shock when the graves were discovered in Kamloops, but it wasn’t surprising to all.

Casimir also called for action from the highest levels of the organization involved in the operation of most of the residential schools at the time.

“To be clear, the Roman Catholic Church has repeatedly refused to accept responsibility or formally apologize for its direct role in the numerous and horrific abuses committed (against) Indigenous children through the residential school system,” she said.

A member in attendance at the news conference yelled, “Shame!” in response to this comment.

She said there have been apologies from local church officials, but nothing from the church’s top tier.

“Despite having operated over 70 per cent of all residential schools in Canada, they sought to reduce their obligations to contribute funds to reconciliation purposes,” Casimir said.

Indigenous leaders plan to visit the Vatican in December to press for an apology from the Pope. The Canadian Conference of Catholic Bishops said the invitation came from Pope Francis, but did not say whether he would offer an apology.

The Pope was also asked to apologize by Prime Minister Justin Trudeau in 2017.

Speaking publicly from St. Peter’s Square in May, he “expressed (his) closeness to the Canadian people traumatized by the shocking news,” but his comments fell short of an actual apology.

Casimir she reminded the public its not only the church behind the school system.

“The federal government passed a law that permitted the Royal Canadian Mounted Police to forcibly remove children from their families and communities to be enrolled in Indian residential schools.”