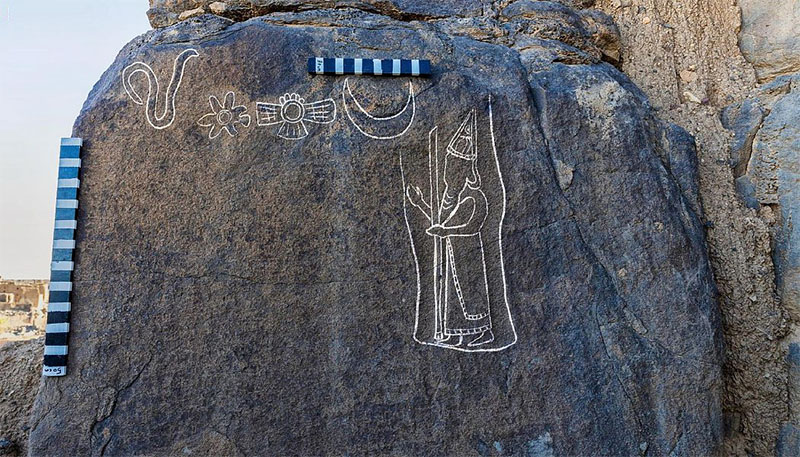 Archeologists in Saudi Arabia have discovered the largest inscriptions in the Kingdom depicting the Babylonian King Nabonidus in the north-western city of Hail.

“Archaeologists from the Saudi Heritage Commission have discovered fascinating rock inscriptions in the Hail region (northern Saudi Arabia) that depict the Babylonian King Nabonidus,” the authority announced earlier this week.

The inscriptions, dating back to the mid-6th century, depict King Nabonidus of Babylon holding a scepter and surrounded by religious symbols, according to the Commission.

The discovery provides “further evidence of the Kingdom’s historical role as a cradle of civilizations in the Arabian Peninsula,” the Commission said.

The inscriptions are approximately 26 lines of script, making it the longest engravings found in Saudi Arabia.

They were discovered in the al-Hait area in Hail, which features several ancient cites and monuments including castles, fortresses, and water installations.

Al-Hait, which was known as “Fadak” in ancient times, has great historical significance and is home to a collection of rock art, ancient inscriptions, and early Islamic writings that date from the first millennium up until the early Islamic era.

Europe floods: Search for missing goes on as toll tops 90