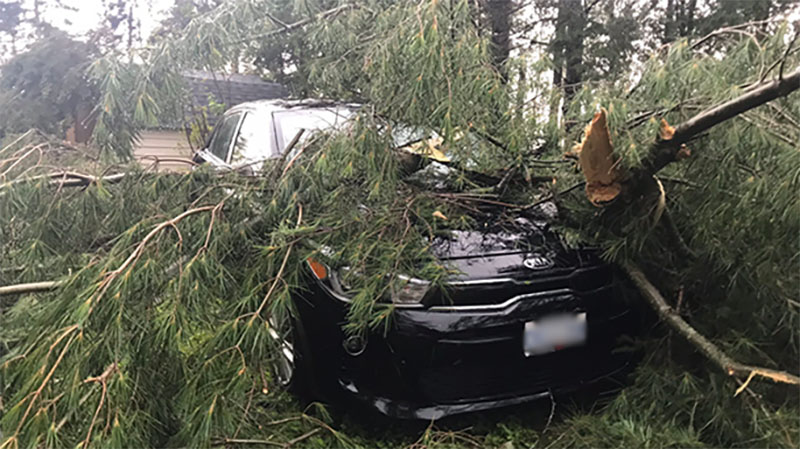 Environment Canada had issued a severe thunderstorm watch shortly after 10 a.m., saying conditions were favourable for the “development of dangerous thunderstorms that may be capable of producing damaging wind gusts and large hail.”

Pictures emerged on social media late Tuesday morning of downed trees that had been ripped from their roots.

Environment Canada has not confirmed whether a tornado occurred in the area.

The weather agency had cautioned winds could reach 110km/h with ping pong-sized hail and had warned of the potential for a tornado.

Premier Doug Ford posted about the storm to Twitter, saying, “Some very severe storms are rolling across Southern Ontario today, including a possible tornado in #ParrySound. Please keep an eye on weather advisories in your region and stay safe.”

The weather agency cautioned winds could reach 110km/h with ping pong-sized hail and the potential for a tornado.

A line of thunderstorms that developed near Georgian Bay is heading east, according to Environment Canada.

The weather watch was also issued for Muskoka, including Bracebridge, Huntsville and Gravenhurst.

The severe weather is expected to last into the early evening.

Also under a severe thunderstorm warning is Grey County, including Dundalk, Owen Sound and the Blue Mountains and Dufferin County.

Daytime highs will reach 24 C, but it will feel more like 31 C with the humidex.

Additionally, a special air quality statement is in effect for parts of southern Ontario as smoke from forest fires in northwestern Ontario moves across the province.

Environment Canada said the concern is high levels of air pollution could reduce visibility and erode air quality if the smoke descends to ground level.

The haze should clear when a cold front moves in later Tuesday.

Last Tuesday, severe storms spawned seven tornadoes and downbursts in Ontario and Quebec, including an EF-0 in Penetanguishene and a downburst in the Lake of Bays.

Barrie Police reopened the roads in the Prince William Way neighbourhood Monday afternoon as city staff completed the cleanup of public lands affected by the tornado.

Ongoing public information about the tornado recovery is available on the City of Barrie’s website.