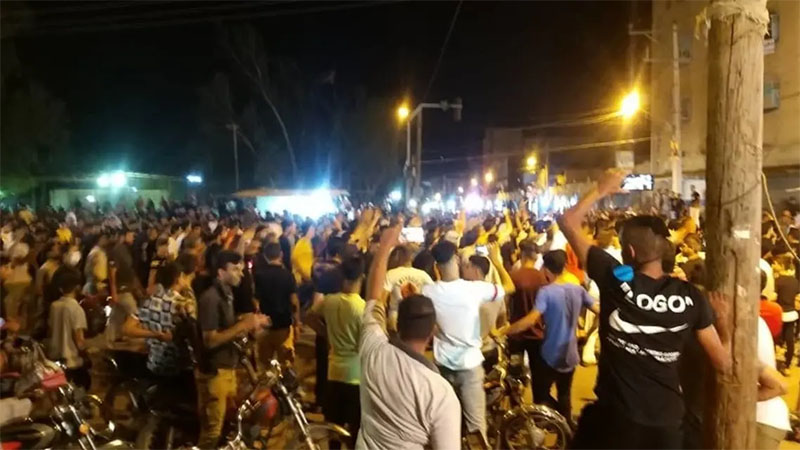 The protests, which began on July 15, were initially concentrated in Arab majority areas in oil-rich Khuzestan, which is home to ethnic Arabs who have long complained of discrimination in Iran. But the demonstrations have since spread to more cities in Khuzestan, as well as to the western Lorestan province.

For the latest headlines, follow our Google News channel online or via the app.

Protests broke out in the city of Aligudarz in Lorestan with demonstrators shouting slogans against Iran’s highest authority, Supreme Leader Ali Khamenei, a video shared on social media showed. Security forces opened fire on protesters in the city, according to another video.

“This is Aligudarz … security forces are shooting ordinary people,” a man was heard saying in one video circulating on social media.

As the internet is all but cut off in #Khuzestan, videos are only slowly trickling in.

This young man from the city of Aligoudarz has been brutally shot by the Islamic Republic.

He was protesting for water. Many more could be dead pic.twitter.com/cwYq6pxU7U

In Khuzestan province, the epicenter of the protests, demonstrations continued in multiple cities and towns, including the provincial capital Ahwaz and the port city of Mahshahr. Security forces opened fire on protesters in Mahshahr, videos shared online showed.

Al Arabiya English could not independently verify the videos’ authenticity.

There was a notable decrease on Thursday in the number of videos shared online from Khuzestan compared with previous days. Activists have attributed this to authorities disrupting internet access in the region.

Global internet monitoring firm NetBlocks said on Wednesday mobile phone internet service in Iran had been disrupted from July 15, the first day of the protests.

The effects represent “a near-total internet shutdown that is likely to limit the public’s ability to express political discontent or communicate with each other and the outside world,” NetBlocks added.

In November 2019, Iran shut down access to the internet for several days amid widespread anti-government protests.

Iran has so far confirmed the death of two young men and a police officer in violence connected to the protests, blaming the three deaths on unknown “rioters.”

Activists said the two young men, as well as more protesters, were killed by security forces.

Iranian officials, who typically use the term “rioter” to refer to protesters, have blamed deaths in past protests on protesters.

The Ahwaz Human Rights Organization, which monitors human rights abuses in Khuzestan, on Friday named seven citizens it said were killed by security forces in protests across the province. The rights group named 16 others it said were arrested in Khuzestan in connection with the protests.

“Having to deal with water shortages and heat above 50 degrees Celsius is very difficult and exhausting, and people have the right to protest the current situation,” the official IRNA news agency quoted him as saying.

President-elect Ebrahim Raisi, who will take over from Rouhani on August 5, said on Thursday Khuzestan had been neglected and added that he will appoint a governor with “special powers” for the province to address its problems more effectively, IRNA reported.

The water crisis has devastated agriculture and livestock farming in Khuzestan and caused power outages in other parts of the country, which sparked protests in several cities earlier this month.

Authorities have blamed the water shortages on a severe drought, but protesters say government corruption and mismanagement, as well as “discriminatory” policies aimed at changing the region’s demography, are to blame.

The protests in Khuzestan come as thousands of workers in Iran’s key energy sector have launched strikes for better wages and working conditions.

Iran’s economy has been hit hard since 2018 when former US President Donald Trump withdrew Washington from the 2015 nuclear deal between Tehran and world powers and reimposed sweeping sanctions on the country. The COVID-19 pandemic has exacerbated the country’s economic problems.

Man with coronavirus disguises as wife on Indonesian flight