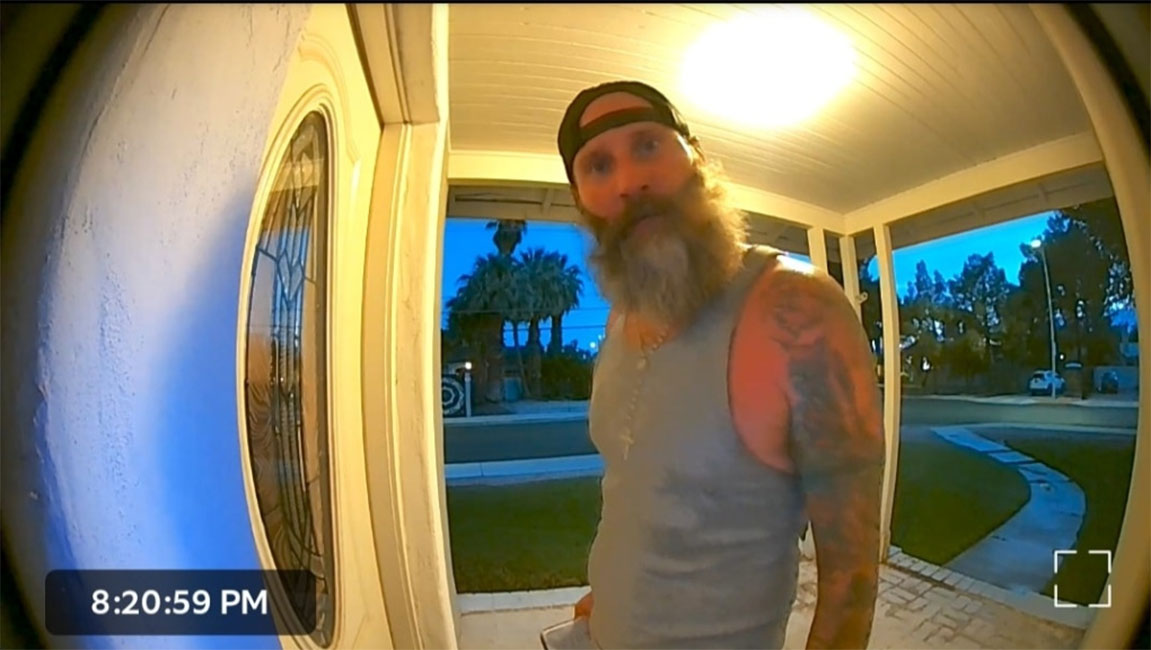 Warning: This story contains disturbing content and may not be suitable for all readers.

Las Vegas police have arrested a man after he allegedly threatened to rape and murder a woman outside her front door in an encounter recorded by a doorbell camera.

In the video, which was shared on social media after the incident on Wednesday, a man can be seen approaching the front door of a home in downtown Las Vegas. He is heard stating that he rang the doorbell because he has “a couple questions” for the occupant.

The woman inside the home told the local Fox-affiliated news station KVVU-TV that she didn’t interact with the man during the incident.

After repeatedly knocking on the door and announcing that he has a couple of questions, the footage shows the man turning to leave. That is, until the voice of the woman’s husband, who was not home at the time, is heard on the doorbell’s intercom system asking for the man’s identity.

The man on the doorstep repeats that he has a couple of questions before stating: “What I’m looking for is for the girl that’s in the house to come out here because I’m going to rape her and kill her. Can you have her open the door?”

When he receives no response, the man continues to threaten to rape and kill the woman, adding that he has a knife and a gun.

The video shows the man knock on the door one more time before he says “alright” and walks away from the home while muttering to himself.

The woman in the home posted the video to Facebook to warn others in the neighbourhood and wrote that she filed a report with the police.

On Thursday morning, Las Vegas police arrested a suspect after a citizen in the area recognized the man in the doorbell camera video circulating online, according to KVVU-TV.

The suspect was taken into custody and charged with aggravated stalking, coercion, and obstructing a public officer, the television station reported.

None of the allegations have been tested in court.