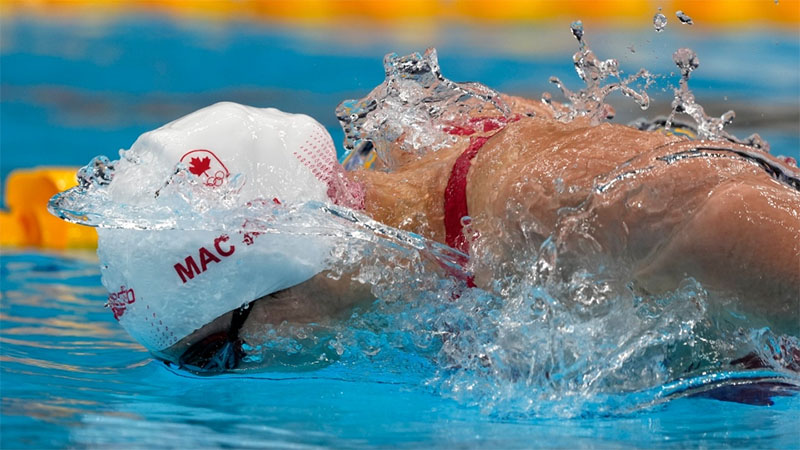 Canada’s women are trying to pick up where they left off in the Olympic pool.

Six swimming medals tied the track and field team for the most in Rio’s Summer Olympics five years ago.

The women carried momentum from Rio forward through subsequent international swim meet before the global COVID-19 pandemic parked them.

The erased competitions, the postponement of Tokyo’s Games to 2021 and the loss of training hours early in the pandemic has them hungry to show Canada remains among the top women’s swim teams in the world.

“Being in Canada with the lockdowns that we’ve had, we haven’t really shown the world what we have yet so in a way I still think we’re kind of seen as the underdogs right now,” said butterfly world champion Maggie Mac Neil of London, Ont.

“I think that will only fuel us going into the rest of the meet.”

The relay team of Penny Oleksiak and Kayla Sanchez of Toronto, Taylor Ruck of Kelowna, B.C. and Rebecca Smith of Red Deer, Alta., advanced out of Saturday’s 4 x 100 freestyle relay heats into the final Sunday morning, Saturday evening in Canada.

The 21-year-old Mac Neil qualified fifth overall in her Olympic debut in a time of 56.55 seconds. Three-time Olympian Savard was 11th in 57.51. The final is Monday.

Canada’s relay foursome ranked third overall just under two seconds behind Australia and less than half a second back of the Netherlands in qualifying.

“I think we all definitely have a bit more speed going into tomorrow,” Oleksiak said. “I think we’re all just here to swim as fast as we can.

“We’ve been training insanely hard. If you know us, you know no one of us is going to quit in practice so it’s always a tough day every single day.”

Oleksiak and Ruck were 16-year-old members of the relay team whose 4 x 100 bronze medal was Canada’s first medal of the Rio Games in 2016.

“Penny and Taylor are my age,” Mac Neil pointed out. “Watching them do that at 16 gave me chills. It’s great to be here with them this time.”

Oleksiak went on to win 100-metre freestyle gold, 100-metre butterfly silver and anchor Canada to another relay bronze in the 4 x 200.

Hilary Caldwell of London, Ont., who has since retired, and Kylie Mass of LaSalle, Ont., both earned backstroke bronze medals in Rio.

Tokyo’s 15,000-seat pool built for the 2020 Games was devoid of paying spectators Saturday. Swimmers’ teammates yelled encouragement from the seats.

International spectators already barred from entering Japan, when Tokyo entered a state of emergency July 12 because of rising COVID-19 cases, domestic ticket buyers were told they could not attend events

“It’s always a challenge coming in with a bullseye on your back,” Mac Neil said. “Going into worlds I was relatively unknown, so I really didn’t have that challenge.”

Pickrem was pre-selected before June’s trials to race the 400 and 200 medleys and 200-metre breaststroke in Tokyo.

“With a very busy program that also consists of two other individual events which would have heats, semifinals and finals, and may also include relays, this decision is in the best interest of the athlete at this time,” Swimming Canada high-performance director John Atkinson said in a statement Saturday.

“Our focus turns to supporting Sydney in her preparation for the 200m individual medley in two days’ time.”

Tessa Cieplucha of Georgetown, Ont., placed 14th and outside the top eight advancing to the women’s 400 I.M. final.

Gabe Mastromatteo of Kenora, Ont., was 38th in the men’s 100-metre breaststroke.

The last major international event in a 50-metre pool for the majority of Canadians in Tokyo was the 2019 world championships.

Canadians claimed eight medals in the pool and another in open-water swimming in Gwangju.

Mac Neil won the 100 fly and Masse defended her world title in the 100-metre backstroke. The women collected bronze medals in all three relays, which was a first for Canada at a world championship.

The Olympic swim trials called off in 2020 were scheduled for April of this year, then May, and finally staged in June in Toronto.

“It’s a short turnaround for us this time,” Atkinson said following trials.

Masse in backstroke, Oleksiak in the 100-metre and 200-metre freestyle and Mac Neil in butterfly are Canada’s top medal hopes in the pool.

Ruck will be a key cog in the women’s relays again. Toronto’s Summer McIntosh, who is Canada’s youngest athlete at 14, joins Oleksiak in racing the 200-metre freestyle.

Markus Thormeyer of Delta, B.C., is one to watch in men’s backstroke.

Brent Hayden of Mission, B.C., who earned 100 freestyle bronze in London in 2012, came out of retirement and competes in the men’s 50-metre freestyle.

“We are going there to challenge for medals, but we don’t put any specific target on that,” Atkinson said.

“Our pool team is quality. It’s been selected to ensure that the team can perform and sustain repeatable performances over the nine days of swimming competition in Tokyo.”