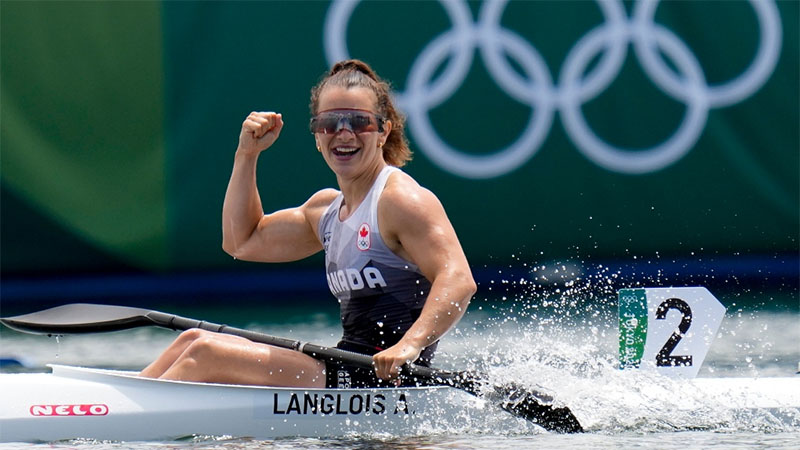 It was a good first day on the water for Canada’s canoe/kayak team at the Tokyo Olympics on Monday as three of five boats qualified for the semifinals at the Sea Forest Waterway.

Quebec’s Andreanne Langlois and Nova Scotia’s Michelle Russell both advanced to the next round of the women’s 200-metre kayak single semifinals, a race they consider “secondary” for them.

“We haven’t raced for a long time, so I thought, might as well put in the experience.”

Langlois won her quarterfinal in 41.728 seconds, while Russell finished second in hers in 42.940 in a tight race where four kayaks crossed the finish line almost simultaneously.

“I’m glad to be on the right side of the photo finish,” Russell said. “I had no idea where I was for the whole race. When we crossed the line, (Britain’s) Emily Lewis right next to me, we’re looking at each other and didn’t know what was going on.

Langlois led the first portion of her qualifying heat after a great start, but at too fast a pace to maintain over 200 metres, and ended up fifth.

“I was too excited,” she said. “I’m a bit like that: I’m a sprinter at heart and I just have to turn the switch to ‘on’ and I’m off. I’ve learned in the last few years to control myself, that’s what I did in the quarterfinal,” said Langlois, who finished 16th in Rio.

The two athletes were especially happy to have knocked off any rust due to not competing since 2019 because of the COVID-19 pandemic.

“I compare it to taking off a bandage. The first race, you’re a little nervous, uncertain. My stress level was high,” Langlois said.

“It feels good. It showed me what to work on. It was a like a dress rehearsal for my quarterfinal.”

“I had the double Olympic champion right beside me. That was a good wake-up call,” she said. “I was happy to have improved from the heat to the quarters.”

Ontario’s Roland Varga and Nova Scotia’s Connor Fitzpatrick also advanced to the semifinals of the men’s 1,000-metre canoe double. The duo finished third in their quarterfinal with a time of 3:50.768.

McTavish finished fourth in the 1000-metre kayak singles, below the cutoff to qualify.

Bray-Lougheed and Schmidt failed to progress in the 500-metre kayak double after finishing fifth.