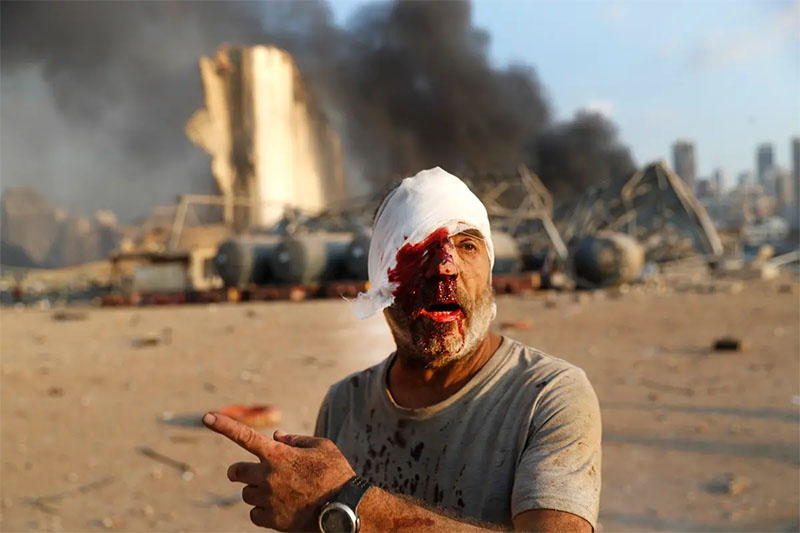 The Beirut Port explosion on August 4 last year not only caused the Lebanese capital’s port to go up in smoke, but it reverberated across the capital and surrounding areas, causing immense widespread physical, mental and economic damage.

On Wednesday, Lebanon marks a year since the blast, the country’s worst-ever peacetime disaster. The Beirut blast, which killed 214 people, was equivalent to a 3.3 to 4.5 magnitude earthquake.

It was one of the world’s biggest non-nuclear explosions to ever be recorded. Stored in a warehouse for six years, the large amounts of ammonium nitrate exploded and injured 6,500 people.

Prior to the blast, the country was already grappling with an out-of-control pandemic and instability, years of corruption and national debt brought on by the ruling elite.

Al Arabiya English spoke with Chief Economist and head of Research at Bank Audi Marwan Barakat to better understand the state of the country now and how the blast worsened matters.

“The explosion actually further worsened the country’s economic conditions, bearing in mind that Lebanon was already caught under an unprecedented macros crisis [before the blast] that drove it into real sector depression, monetary drift and huge socio-economic pressures at large,” said Barakat.

“The World Bank Group, in cooperation with the United Nations and the European Union launched a Rapid Damage and Needs Assessment (RDNA) immediately after the explosion, to estimate the impact on the population, physical assets, infrastructure and service delivery in Beirut, utilizing ground data and cutting-edge remote tools and technology. The estimate of the damages and losses to the economy stands at an upper bound of circa $8 billion, very significant when compared to the size of the Lebanese economy,” he added.

United Kingdom-based charity Save the Children has said that hundreds of children in Lebanon are going to bed hungry as their parents fail to make ends meet at the end of every month. The devaluation of the country’s currency has left parents unable to pay for basic needs such as electricity, food and medicine.

“Our children are craving food- as simple and tragic as that. My children (16 and 13 years old) lost weight significantly and the entire situation has affected not only their physical but also mental health,” Najwa, a single mother grappling with the economic crisis in Lebanon, told Save the Children.

“Both my parents are elderly with chronic illnesses. My father has cancer and, due to the situation, we missed a couple of months of treatment. Medication was either unavailable or too expensive. I don’t know how long we’ll be able to survive the situation. For months, we kept waiting and hoping things would get better but all we’re witnessing is a free fall into the abyss,” she added.

The Beirut blast’s impact on the economy, coupled with that of the COVID-19 pandemic, have led to the highest spike in food prices in the world, meaning that families are having to resort to desperate measures such as buying food on credit, selling furniture, eating less and consuming poorer quality food.
According to Barakat, there is room for the economic crisis to worsen even further.

“In the absence of a credible Cabinet formation, the crisis can get worse in Lebanon,” he said. “As time goes by, the remaining reserves of the Central Bank are getting depleted on a daily basis. If no solution is reached within an acceptable horizon, the full depletion of BDL reserves can cause the macro situation to worsen, leading to a hyperinflation similar to a Venezuelan-like scenario and generating intense socio-economic pressures on Lebanese households,” added Barakat.

He believes that “…the mild margin of maneuver within the context of a wide confidence crisis and a lack of available tangible financing” would make any measure of support “prove to be of limited impact amid the massive current and upcoming socioeconomic pressures.”

Undoing the damage: What can be done?

“The government of Lebanon and the international community need to start treating the situation in Lebanon for what it is- a full-fledged humanitarian crisis driven by an economy in total collapse. This crisis is entirely man-made, so it can also be man-unmade. If that doesn’t happen, children can die of hunger any day,” Save the Children’s country director for Lebanon Jennifer Moorehead was quoted as saying in a report released by the charity group on Thursday.

“The intense political bickering around Cabinet formation for the past year adds to the political cloudiness, increases monetary fears and accentuates black market volatility and fuels inflationary pressures,” says Barakat.

“What is needed in this political volatility period is to have concerted efforts between government, parliamentary and monetary authorities to try to lessen, as much as possible, the burden of political uncertainty on the Lebanese population.”

Barakat believes that sitting back and doing nothing whilst relying on the status-quo would only lead to “total chaos”, but instead, he suggested that an orderly “restructuring” based on the International Monetary Fund’s disbursement of $860 million to Lebanon in relation to its Special Drawing Rights (SDR), an international reserve asset created by the group in 1969 to supplement its member countries’ official reserves.

He suggested that the restructuring take place with strict fiscal and structural reforms in place, by a credible cabinet, which newly elected prime minister-designate Najib Mikati is set to announce in the coming weeks.

“It ought to be based on the restructuring of the public sector to reduce its borrowing needs, the creation of a sovereign fund with state assets for circa $30 billion which will serve directly or indirectly to bridge the prevailing FX (Foreign Exchange) gap, the injection of liquidity into the local banking sector via a loan linked to gold reserves, floating the local currency which reduces the local debt stock and negotiating a discount on Eurobonds investors.”