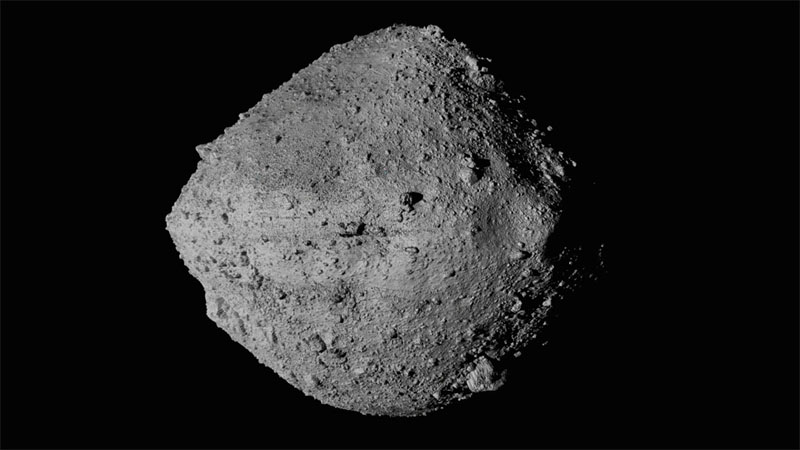 Bennu is one of the most hazardous known asteroids in our solar system. Thanks to a visit by a NASA spacecraft, scientists have a much greater understanding of the near-Earth asteroid, its upcoming closest approaches to Earth — and whether it could impact our planet.

The data collected by NASA’s OSIRIS-REx mission over two yearsnallowed for precision tracking of Bennu’s movements through 2300, reducing the uncertainties scientists had about the asteroid’s future orbit. The findings show Bennu has a 1 in 1,750 chance of impacting Earth through 2300 — higher than previously thought.

Prior to OSIRIS-REx visiting and studying Bennu, researchers thought the overall probability of Bennu impacting Earth through 2200 was 1 in 2,700.

Even though this means the odds are greater of Bennu hitting Earth in the future, the researchers don’t believe the change is great enough to worry about.

“It’s not a significant change and the impact probability is pretty much the same,” said lead study author Davide Farnocchia, a scientist at NASA’s Center for Near Earth Object Studies. “We actually now have a much better knowledge of the Bennu trajectory and we can better constrain what the possible pathways to impact are. I think overall the situation has improved and I’m not any more concerned about than I was before.”

If Bennu does impact Earth, it would create a crater between 10 to 20 times its size and cause an area of devastation that could reach 100 times the size of the crater, said Lindley Johnson, NASA’s planetary defense officer.

A study based on the findings published Wednesday in the journal Icarus.

“NASA’s Planetary Defense mission is to find and monitor asteroids and comets that can come near Earth and may pose a hazard to our planet,” said Kelly Fast, program manager for the Near-Earth Object Observations Program at NASA headquarters in Washington, in a statement.

“We carry out this endeavor through continuing astronomical surveys that collect data to discover previously unknown objects and refine our orbital models for them. The OSIRIS-REx mission has provided an extraordinary opportunity to refine and test these models, helping us better predict where Bennu will be when it makes its close approach to Earth more than a century from now.”

The asteroid will make its next closest approach to Earth in 2135. While Bennu won’t come close enough to pose a threat to Earth then, knowing its exact trajectory can help scientists better understand how the gravity of our planet will change the asteroid’s future orbit around the sun. This could also affect the chances of Bennu impacting Earth after 2135.

Bennu will make its most significant close approach on Sept. 24, 2182, with a 1 in 2,700 chance of impacting Earth on that day. The researchers agree that the risk of Bennu impacting Earth is low, and NASA will continue to observe the asteroid’s orbit for years to come.

STUDYING AN ASTEROID UP CLOSE

The OSIRIS-REx mission, or Origins, Spectral Interpretation, Resource Identification, Security-Regolith Explorer, arrived at Bennu in December 2018 and departed earlier this year on May 10.

In addition to gathering unprecedented information, the spacecraft collected a sample from the asteroid’s surface that is currently heading back to Earth. The sample will arrive in September 2023.

Even though OSIRIS-REx is a couple of years from returning to Earth, it has been sending back data revealing what it learned about Bennu the entire time. This allowed scientists to learn that it’s a rubble-pile asteroid shaped like a spinning top, composed of rocks bound together by gravity. It’s about 500 metres wide.

“The OSIRIS-REx data give us so much more precise information, we can test the limits of our models and calculate the future trajectory of Bennu to a very high degree of certainty through 2135,” Farnocchia said. “We’ve never modeled an asteroid’s trajectory to this precision before.”

The Center for Near Earth Object Studies, based at the Jet Propulsion Laboratory in Pasadena, Calif. can use asteroid data to calculate their trajectories, predict their future motion, and assess whether or not there is a possibility of an impact.

The orbits of asteroids around the sun change over time, and the smallest things can shift them. Specifically, the researchers wanted to determine whether Bennu will experience a “gravitational keyhole” during its first close approach to Earth in 2135. A gravitational keyhole is a small region of space where a planet’s gravity can alter the orbit of a passing asteroid.

If Bennu passes through one of these at a certain time due to Earth’s gravity, it could set Bennu on the course for a future impact with our planet.

If Bennu does pass through a gravitational keyhole, “then the gravity of the Earth would tweak the motion of Bennu by just the right amount to put it on a collision trajectory at a later date in the 22nd century,” Farnocchia said.

“But we should keep in mind that the impact probability, overall is really small,” Farnocchia said. “In fact, there is a 99.94% probability that there is not an impact trajectory. So, there is no particular reason for concern.”

The sun’s heat can cause something called the Yarkovsky effect on asteroids. As asteroids orbit the sun, they repeatedly heat and cool as they rotate. As the asteroid spins through this temperature shift, it releases energy, and the asteroid gets a small bit of thrust.

“The Yarkovsky effect will act on all asteroids of all sizes, and while it has been measured for a small fraction of the asteroid population from afar, OSIRIS-REx gave us the first opportunity to measure it in detail as Bennu travelled around the Sun,” said study coauthor Steve Chesley, a senior research scientist at NASA’s Jet Propulsion Laboratory, in a statement. “The effect on Bennu is equivalent to the weight of three grapes constantly acting on the asteroid — tiny, yes, but significant when determining Bennu’s future impact chances over the decades and centuries to come.”

Other forces can alter the movement of asteroids, including the gravity of the sun, other planets, moons and other asteroids. Dust in the solar system and the charged stream of particles from the sun, called the solar wind, can also affect Bennu’s orbit. And during the OSIRIS-REx mission, the team was surprised to observe Bennu’s surface ejecting particles into space, which could also play a role.

While the target goal of the mission was to collect a sample from Bennu and return it to Earth, the insight gained into near-Earth asteroids and achieving better calculations of their orbits is crucial.

“The orbital data from this mission helped us better appreciate Bennu’s impact chances over the next couple of centuries and our overall understanding of potentially hazardous asteroids — an incredible result,” said Dante Lauretta, OSIRIS-REx principal investigator and professor at the University of Arizona, in a statement.