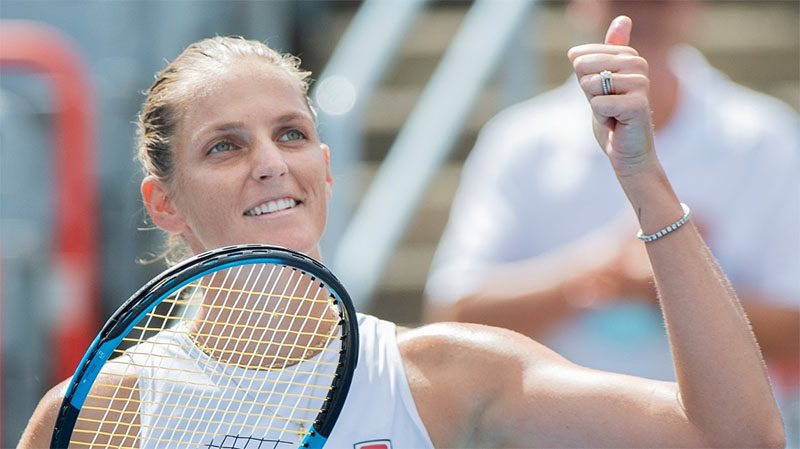 Karolina Pliskova of the Czech Republic clinched a spot in the finals at the National Bank Open in Montreal Saturday, beating No. 1 seed Aryna Sabalenka of Belarus 6-3, 6-4.

Sabalenka finally broke the No. 4 seed late in the second set but was broken right back after a series of unforced errors and couldn’t work her way into the lead.

Sabalenka struggled with consistency throughout the match, registering five double faults and saving just 4-of-7 break points. She threw her racket to the ground in frustration early in the second set.

At the men’s tournament in Toronto, No. 3 seed Stefanos Tsitsipas of Greece will take on American Reilly Opelka in the first semifinal, and the day will close with Russian No. 1 seed Daniil Medvedev battling John Isner of the U.S.

Sabalenka, who leads the WTA Tour in aces, started the match with an ace but struggled to return Pliskova’s serve.

Pliskova broke the world No. 3 early in the match, taking a 2-1 lead after Sabalenka sent a ball long following an extended rally.

Sabalenka began to settle in midway through the second set, coming towards the net, then dropping shots behind her opponent.

Pliskova, the world No. 6, used her strong serve to stay ahead, saving a break point with an ace and two other serves that Sabalenka simply couldn’t control.

It took Sabalenka three sets to defeat American Sloane Stephens in the second round of this year’s National Bank Open. She went on to eliminate Canada’s Rebecca Marino and Victoria Azarenka, both in straight sets.

Pliskova took a three-set victory over Donna Vekic of Croatia in the second round, then dispatched American Amanda Anisimova and Spain’s Sara Sorribes Tormo of Spain to clinch her spot in the semis.

Last month, Sabalenka and Pliskova met in the semifinal at Wimbledon, with Pliskova taking a three-set victory. She then lost in the finals to Australia’s Ashleigh Barty.