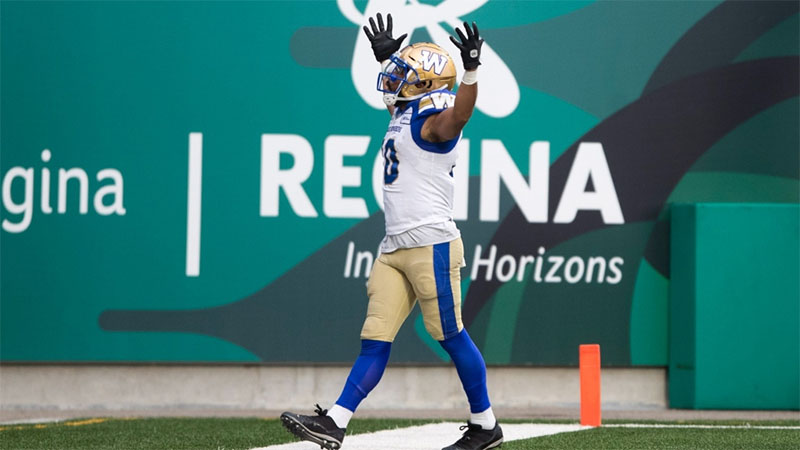 Saskatchewan quarterback Cody Fajardo is determined to rebound from a poor outing and avenge last week’s loss to the Blue Bombers at the Labour Day Classic in Regina.
Fajardo completed 23-of-39 passes for only 211 yards, with no touchdowns and three interceptions, as the Riders fell to Winnipeg 23-8.

The two CFL teams meet again in Winnipeg for the annual Banjo Bowl at a sold-out IG Field on Saturday afternoon.

“If you get the ball first and you drive down and you score, it kind of makes the home team a little bit restless — the fans at least. There’s so much buzz and energy at the beginning of the game, to take that out early is great. If you go two-and-out, then that buzz continues to build and that just makes it harder throughout the game.”

But the Riders (3-1) will have to negate Winnipeg’s dominant front seven that threw Fajardo off his game last week.

“We know the kind of ball we play, the kind of ball that we want to play coming into the game and it’s gonna be on Saskatchewan’s offence to stop us,” said Willie Jefferson, defensive end for the 4-1 Bombers. “We want to stop their offence, but they have to stop us as well.”

That won’t be easy, Fajardo admitted.

“I think we have to slow them down,” he said. “We have to be able to run the ball and mix up our passes and runs. When you get behind against a good team like Winnipeg, you can let the front seven just rush the passer and that makes it a very tough day as a quarterback.”

Roughriders head coach Craig Dickenson does have a plan for Jefferson and co.

“I don’t think you can stop them completely, but I do believe you can slow the defensive line down by changing up cadence, which is not easy to do in a noisy environment, and also, just running some plays to maybe force them to move side to side, misdirection stuff,” he said. “The only way I think, honestly, that you’re going to slow them down is put drives together and try to tire them out.”

Bombers supporters can be creative when it comes to taunting the Riders, said defensive back Elie Bouka.

“It’s tough not paying attention to when they start calling you names,” he said. “They do their research, so you try not to pay attention too much, but it’s a fun crowd to be at. For me, I love playing with crowds like that. I find it funny.”

Sweeping the Riders would be huge, said Winnipeg’s Andrew Harris.

“These are important games and crucial games, and ones that get our fan support really excited,” he said. “The first game was big and now, this one is even bigger for us because we’re doing it in front of a home crowd and we want to have our building electric and an amazing experience for everyone that’s involved in it.”

The CFL suspended Saskatchewan defensive lineman A.C. Leonard for two games Friday for failing to provide a sample for drug testing as outlined in the joint CFL-CFLPA drug policy Riders receiver Jordan Williams-Lambert is also out with injury International linebacker Jontrelle Rocquemore returns to the Winnipeg roster from injury while national defensive lineman Nick Dheilly draws in for the first time. Since the game was named the Banjo Bowl, the Bombers have won nine of the 16 games, including four of the last five. Bombers special teams ace Mike Miller needs just two special teams tackles to reach the 200 milestone. Winnipeg has given up a league-best 13.4 points a game. Bombers defensive end Willie Jefferson will play his 100 CFL game.

St. Thomas, Ont. man charged with assault with a weapon after gravel thrown at Justin Trudeau