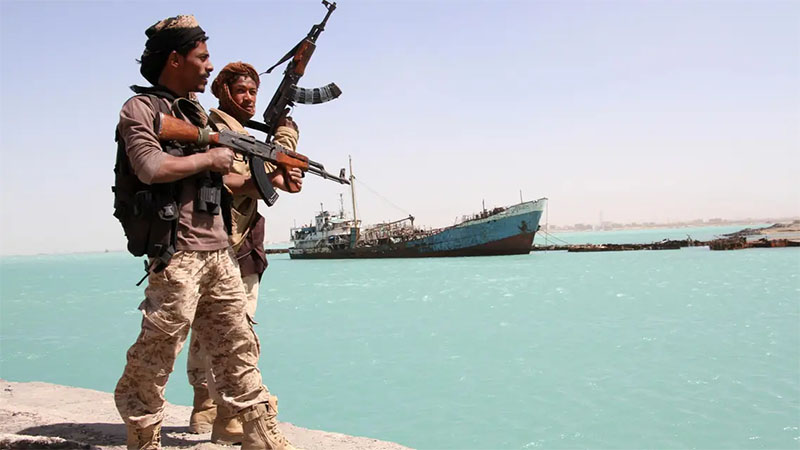 A missile attack blamed by the government on Houthi militia in Yemen on Saturday targeted a key port used to bring humanitarian aid into the war-ravaged country.

The Red Sea port of Mokha in southwest Yemen is the headquarters of government forces in the region.

“Three missiles and Houthi drones targeted the port of Mokha near Bab al-Mandab,” a government military official told AFP, adding that no casualties were reported.

The Bab al-Mandab strait separates Yemen from Djibouti and is a key passage for international trade, trafficking, and illegal migration.

Yemen, the Arabian Peninsula’s poorest country, has been devastated by a seven-year conflict pitting the Iran-backed Houthis against the government which is supported by the Arab Coalition.

The southwest is vital for the import and delivery of humanitarian supplies.

Mokha port reopened for business a month ago after reconstruction and renovation work, the government official said.

Southwest Yemen has been relatively free of such attacks since the signing in 2018 of the Stockholm Accord on demilitarizing the strategic port of Hodeida north of Mokha.

Sporadic clashes have taken place in the region, sparking appeals for calm from the United Nations which has been unable to secure similar deals elsewhere in Yemen.

Some 80 percent of Yemenis are now dependent on aid, in what the UN calls the world’s worst humanitarian crisis. The war has displaced millions of people.

The UN has issued regular warnings that Yemen could see major famine in 2021, after it raised just $1.7 billion of the $3.85 billion it says the country needs.

The conflict flared in 2014 when Houthi militants seized the capital Sanaa, prompting a Saudi-led military intervention to prop up the government the following year.