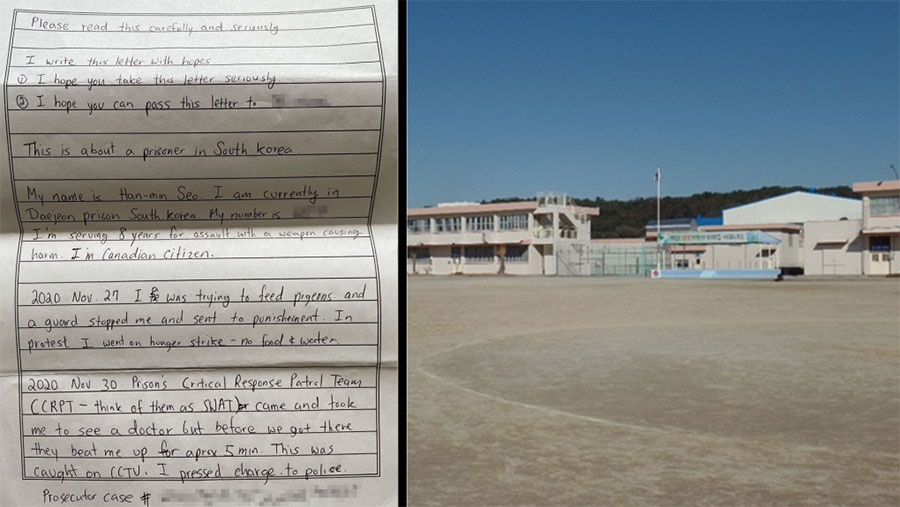 WARNING: This story contains details that may be disturbing to some

In a secret letter sent from prison to a bestselling author in the guise of a gift, a Korean-Canadian man serving time in South Korea said he is being tortured by prison personnel. While Canadian officials say they are aware of the case, South Korea’s Ministry of Justice has denied the allegations, calling them “a one-sided claim without any basis.”

Han-Min Seo, a Canadian citizen serving eight years in Daejeon Prison for assault with a weapon causing harm, sent the letter detailing specific dates and times of the alleged torture and harassment.

Daejeon is about 50 minutes away by train from the South Korean capital city of Seoul, and serves as a major transport hub for the country.

The letter, which was addressed to British author Malka Adler in the guise of a gift of South Korean face masks, was opened by her publisher HarperCollins Publishers in London, U.K., and then forwarded to a Canadian media company at Seo’s request.

CTVNews obtained a copy of the letter in its entirety, and authenticated Seo’s identity through details provided by Global Affairs, including his Canadian citizenship, local reports, court filings and information provided in the correspondence, including his prisoner number.

Bethan Morgan, the assistant editor at HarperCollins subsidiary One More Chapter, who opened the letter and passed it on to CTV News, told CTVNews in an email that “there was no indication as to why” it had been addressed to Adler, other than the fact that her book “The Brothers of Auschwitz” is one of their biggest international bestsellers and that it’s feasible that copies were sold or ordered in Daejeon and ended up in the prison.

In November of 2020, Seo says he went on a hunger strike to protest being punished by the guards for feeding pigeons, and alleges he was beaten by members of the CRPT while on the way to see the prison doctor. Seo said in the letter that there is CCTV footage of the incident and that he pressed charges with local police.

In April of 2021, Seo alleges the CRPT took him to a “calming” room in the prison without reason, where they put him in binding “protective gear” and tortured him every 30 minutes by twisting the cuffs he was wearing. He said that they struck him in the head and pushed down on sensitive parts of his body, including his torso, to make him lose air supply.

Seo alleges this was done to make him retract his November accusations against the CRPT. Seo said he complied to make the torture stop, and was beaten again a few days later, when officers told him he should “admit to everything” or be “charged with hitting an officer.”

In May 2021, Seo alleges that the torture, coercion and harassment escalated, describing going in and out of consciousness as the CRPT allegedly cut off his oxygen supply repeatedly. Seo said in the letter he had spoken to a local police officer and lawyer about what was being done to him, but that prison guards refused to comply with the police request for documentation. Seo alleges that his disclosure of the alleged torture to the policeman and his lawyer caused prison personnel to continue making threats against him – and that he eventually wrote the local prosecution office to retract his November charges out of fear.

Despite numerous attempts, CTVNews was not able to establish independent contact with Seo or his lawyer.

In 2014, Seo, who was a teacher at Suwon Science College, had a dispute which led to a lawsuit for defamation and insult against his former student and teaching assistant. This ultimately resulted in a mediation meeting at the local Suwon Prosecution Office.

At some point during the meeting, Seo left the room and allegedly returned with sulphuric acid– spraying his former teaching assistant, the assistant’s family and members of the prosecution office, according to local reports.

The teaching assistant suffered second-degree burns to his face, upper and lower body, and his parents and members of the prosecution office suffered burns on their faces, hands and thighs, according to court documents filed for Seo’s 2016 sentencing hearing and local reports.

In an email to CTVNews, Suwon Science College acknowledged that Seo used to work at the institution, but declined to comment further as “the case was a matter between Mr. Seo and the student,” and that the matter had gone before the courts.

Seo, who did not reveal the nature of the crime he is incarcerated for in the letter obtained by CTV News, has filed several appeals on various grounds, including human rights concerns.

In a statement to CTVNews, Global Affairs said “Canada takes allegations of torture very seriously,” and that the organization “is aware of the case of a Canadian citizen serving a prison sentence in South Korea and consular officials have been providing ongoing consular assistance from the outset of the individual’s detention.”

“Canada is party to a number of treaties related to the prohibition of torture, including the UN Convention against Torture and Other Cruel, Inhuman or Degrading Treatment or Punishment (CAT), and the International Covenant on Civil and Political Rights,” the statement continued.

Global Affairs said that no further information could be disclosed due to the Privacy Act.

In a statement emailed to CTVNews Wednesday and translated from Korean, the South Korean Ministry of Justice firmly denied all of Seo’s claims, and provided a detailed rebuttal to his allegations.

Referring to Seo’s allegations stemming from April, the Ministry of Justice dismissed it as “just a one-sided claim without any basis,” the statement reads. The statement also describes Seo as combative prisoner who has been disciplined multiple times for things such as using “abusive language” towards prison personnel and threatening gestures, like “hitting the wall with his fist and swinging it” that resulted in him being put in restraints.

For that particular allegation, the statement said prison personnel “judged that there was a high risk of self-harm or harm to others, and in accordance with the relevant regulations, he [Seo] was accommodated in the protective room using protective equipment.”

The statement said that while Seo “may have felt he was subjected to harsh acts,” his allegation of torture by the CRPT related to cutting off his oxygen supply is categorically “not true.”

The Ministry of Justice noted that in regards to Seo’s ongoing appeal process, he has had seven meetings with his lawyer and two phone calls with the Canadian consulate in English.

Ending their statement, the Ministry of Justice wrote: “this is only a one-sided argument from the prisoner, and the Korean correctional institutions continually do their best to protect the human rights of prisoners.”