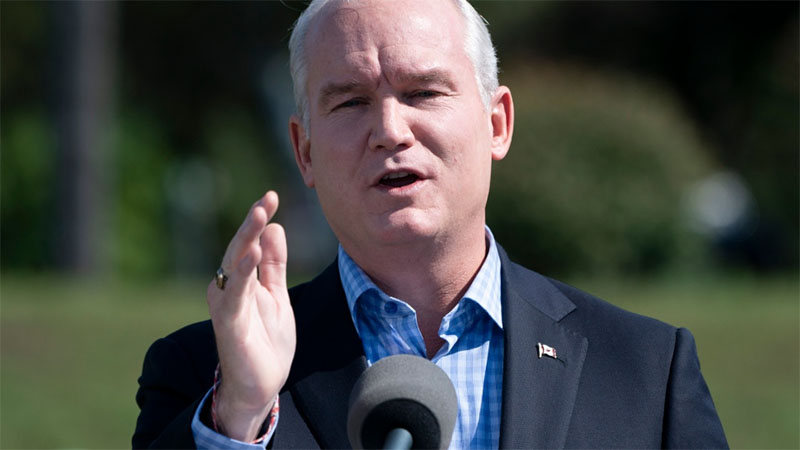 After weeks of running what he’s described as a “positive campaign,” Conservative Leader Erin O’Toole came out swinging hard against his main opponent, Liberal Leader Justin Trudeau on Monday, levelling personal attacks at his morning event, and in a series of new attack ads.

“The differences between Justin Trudeau and myself are stark… When Mr. Trudeau was partying—and we’ve all seen the photos— I was doing search and rescue missions in the military. Every Canadian has met a Justin Trudeau in their lives: privileged, entitled, and always looking out for number one,” O’Toole said.

His remarks during the morning announcement in Liberal-held Kanata-Carleton had a backdrop of young children and their parents playing, while O’Toole focused considerably more on criticizing Trudeau than on the parent-focused policy promise of the day.

“He was looking out for number one when he called this expensive and unnecessary election in the middle of a pandemic. A $600 million power grab. An election that has done nothing to stop the fourth wave, it’s only made things worse by taking the government’s eye off the ball. That’s not leadership, it’s self interest. And it’s Justin Trudeau through and through,” he continued.

In his remarks, O’Toole also touched on the resurfaced SNC-Lavalin scandal, as an example of Trudeau promising to be one kind of leader and governing like another.

“It’s not 2015, Mr. Trudeau. I am a new Conservative leader, and the Justin Trudeau of 2015 is not the Justin Trudeau of 2021,” said O’Toole. “In 2015 I disagreed with him, but I could respect him. I could agree when he talked about what unites us, rather than divides us. I could understand when he talked about a better future Canada could have… Where is that Justin Trudeau? Where is that guy? What would the ‘sunny ways’ Justin think of the prime minister we see today?”

Promising one thing and then changing positions is a critique the Liberals have already levelled against O’Toole, releasing attack ads showing O’Toole’s change in message and tone on the 2021 election trail, compared to when he ran in the 2020 Conservative leadership race on guns and other key issues.

Asked about his tone kicking off the final seven days of the race, O’Toole defended going personal, saying that with just a week left until election day he wants Canadians to think about what it is they are considering voting for.

“I want them to look at why we’re in this election and vote for change,” he said. “So in this last week, I invite Canadians take a real look. Do you want to reward Mr. Trudeau with this pandemic election? Or do you want a positive change with a plan to bring the country together and secure our economic future?”

His remarks seemed to be focusing on getting through to two key audiences: Those who may be disaffected Liberal supporters, and voters considering throwing their support behind smaller or fringe parties in an act of protest.

“Make no mistake: A vote for anyone other than Canada’s Conservatives is a vote for more of the same from Mr. Trudeau,” he said.

The latest Nanos Research dally ballot tracking shows the Liberals in the lead, with 33.2 per cent support, and the Conservatives in close second with 30.2 per cent support. Currently in fifth place in terms of national ballot support, the People’s Party of Canada has been seeing an uptick in support and it’s prompted some questions about the risk of pulling votes away from the Conservatives.

“If you’re [Conservative Leader] Erin O’Toole and play fantasy politics, you’d say ‘what would the world look like without Maxime Bernier?’” Nanos said on Friday’s episode of CTV News’ Trend Line podcast, suggesting that if the People’s Party vote went to the Conservatives, it could put bring them closer to majority territory.

Following up and using some of the same Monday messaging from O’Toole, the Conservative Party has released a series of new television and radio ads focused on Trudeau and his decision to call the election when he did.

“If Justin Trudeau is willing to put his own ambition ahead of protecting Canadians during a pandemic, how can we trust him on anything else?” it asks.

At an announcement about promised new protections for health workers, Trudeau shot back at the attacks levelled against him.

“There is a difference between the kinds of personal attacks that Mr. O’Toole has been engaged in since he became leader, and that we’re seeing right now. And the clear differences of perspective and policy that I’ve been highlighting from the very beginning,” he said, defending his own attacks on O’Toole.

“I’m saying he’s wrong about how to ensure jobs and prosperity and a protected country for people in the future. But that’s what Canadians get to choose. I’m going to let him and his proxies in the anti-vaxxer movement, in the gun lobby, in the anti-choice crowd, continue to attack me. Fine. I’m going to continue to stay focused on Canadians on what Canadians are telling me about what they need,” he said, adding that Canada is seeing a “lack of leadership from Mr. O’Toole on a number of different subjects.”

Conservative Leader @erinotoole has just arrived. He starts off the final week of the #elxn44 with a clear frame: This vote is about whether Trudeau should be rewarded for calling this election, says the differences between Trudeau and him are “stark.” #cdnpoli pic.twitter.com/2aKoWUeECN

Tories promise new parents on leave could earn up to $1,000 without losing EI benefit