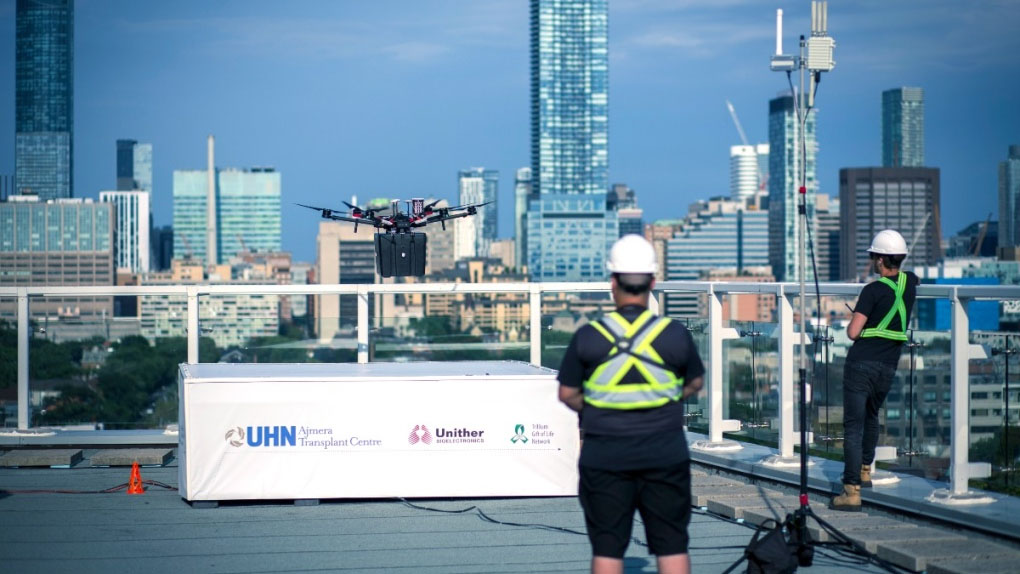 Dr. Shaf Keshavjee was full of nerves as he scanned Toronto’s darkened skyline, craning his neck to spot a drone whizzing toward the downtown rooftop he was standing on.

The drone was only making a short journey — about six minutes — from Toronto Western Hospital to Toronto General Hospital, but the University Health Network’s surgeon-in-chief knew its cargo would make the trip historic and time was of the essence.

Nestled inside a lightweight, carbon fibre container and suspended from a Unither Bioelectronique drone was a set of lungs destined for Keshavjee’s patient, a male engineer to be operated on that last Saturday in September.

“To see it come over the tall buildings was a very exciting moment,” Keshavjee recalled. “I certainly did breathe a sigh of relief, when it landed and I was able to…see that everything was OK.”

He and Bromont, Que. bioengineering firm Unither Bioelectronique believe the trip was the first time lungs have taken flight using an unmanned drone, but they are convinced the method will become the norm as a race to get organs in the sky heats up.

The first to complete the feat was the University of Maryland Medical Center in Baltimore, when a drone-delivered kidney was transplanted in 2019. Since then, MissionGo and Nevada Donor Network sent corneas on a five-minute flight and a kidney on a 25-minute journey and in May, a pancreas took to Minnesota’s skies.

“It’s very much like the first airplane flight. That didn’t go very far, but it really opened the door to what airplane travel is today,” Keshavjee said.

While drone transport for organs may seem like a lofty ambition, doctors and businesses believe technology is crucial to improve outcomes for Canadians with organ diseases.

Last year, 2,622 Canadians received transplants, 4,129 were on waiting lists and 276 died before an organ came available.

Unither Bioelectronique parent company United Therapeutics has been determined to slash that wait-list since the firm was started by Sirius Satellite Radio co-founder Martine Rothblatt in 1996, after her daughter was diagnosed with pulmonary arterial hypertension.

United developed a medicine to save her life and then turned its attention to xenotransplantation, which uses the hearts and kidneys of genetically-modified pigs in human transplantation, and regenerative medicine, which includes creating pig lung scaffolds that can be populated with cells to make an organ.

The company is also looking to use 3D printing technology to produce organs with a patient’s own cells to reduce rejections and it has built Maryland and Florida facilities to conduct ex-vivo lung perfusions, a technique Keshavjee invented to restore and repair damaged donor lungs.

The world is woefully short of organ donors and faster deliveries mean fragile and temperature-sensitive organs have a smaller chance of deteriorating and transplants have better odds of lasting.

Lungs are particularly challenging. They were one of the last organs to be successfully transplanted in humans in 1983 in Toronto and 80 per cent of those offered for donation are unusable because they don’t meet oxygenation, X-ray or function standards.

Drone and biotechnology companies are more determined than ever to reduce that expense and inefficiency. Aside from Unither Bioelectronique and MissionGo, U.S. companies AD Airlines and AlarisPro Transport and China’s EHang are all working on making organ drone flights common.

“It takes courage to be the first to do something like this… but that courage needs to come with the highest standard of safety,” he said.

His team prepared for the Toronto flight for 18 months. Before they received clearance to fly the drone in a busy area, they designed a container to withstand changes in elevation, barometric pressure, vibrations and other jarring events.

There were practice flights loaded with dummy packages simulating lungs and even drop tests for the final drone and container, which were outfitted with a parachute and advanced GPS system.

Rothblatt selected Toronto General Hospital because it was first to successfully complete a lung and double lung transplant.

“I felt that the karma of the universe would be right if the first ever drone transplant was also done at Toronto General Hospital,” said Rothblatt, who recently received Canadian citizenship.

Keshavjee was eager to get involved and had several patients hoping to be the recipient. He chose a drone enthusiast, whose recovery is going well.

But his and United’s work is far from over. The company’s website shows it has 14 health projects underway, with many expecting results in the near- or short-term.

“There’s so many problems in the world like climate change, war, just endless problems,” Rothblatt said.

“But to be able to wake up each morning and just smile and say, ‘wow, another life was saved that day’… It gives me a sense of fulfilment.”