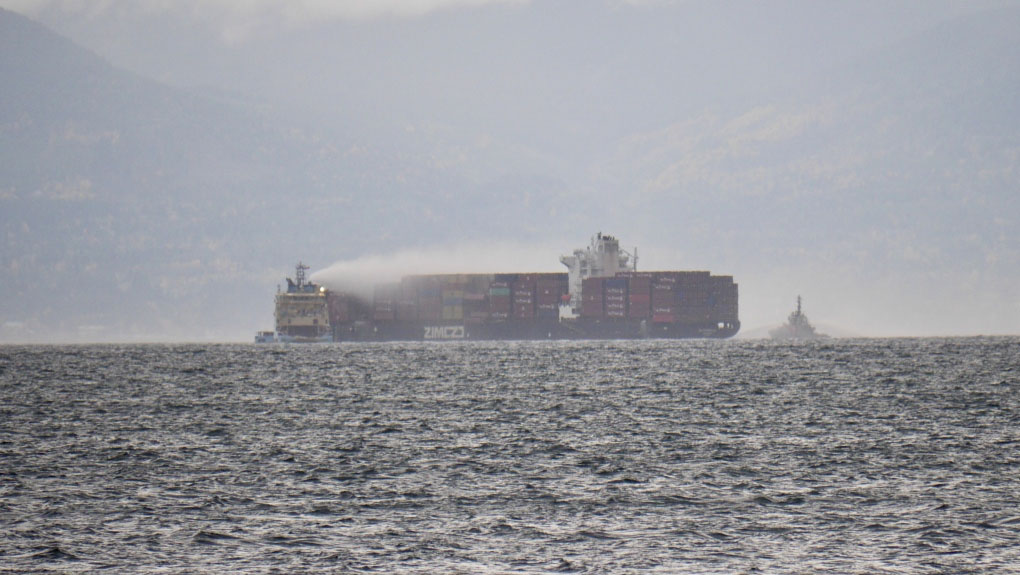 The Canadian Coast Guard said there was significant risk to mariners but not to people on shore as a fire burned in containers aboard a cargo ship about eight kilometres off the coast of Victoria on Sunday.

The Coast Guard said it received word late Saturday morning about a fire in 10 damaged containers aboard the MV Zim Kingston, which was anchored in Constance Bank, B.C.

Two of the burning containers on the ship’s deck held hazardous material identified as potassium amylxanthate, the agency said in a news release.

It noted the ship itself was not on fire, but said an emergency zone had been set up for one nautical mile around the Zim Kingston.

The Joint Rescue and Coordination Centre in Victoria said 16 crewmembers were safely taken off the ship, while five others, including the captain, remained on board at their own behest.

Canadian Coast Guard spokeswoman Michelle Imbeau said an Incident Command Post led by the Coast Guard on behalf of the federal and B.C. governments, as well as First Nations representatives, was co-ordinating a multi-agency response to the incident.

An Emergency Zone has been set up for 1NM around the ship while fire fighting operations are underway. Currently there is no safety risk to people on shore, however the situation will continue to be monitored.

She said the Command Post was also working with the U.S. Coast Guard to monitor 40 containers that fell overboard from the Zim Kingston in choppy waters on Friday and were floating about 12 nautical miles off the west coast of Vancouver Island, near Bamfield, B.C.

The Coast Guard said the containers, some of which contain hazardous material, posed a significant risk to mariners, and that with stormy weather in Sunday’s forecast, recovering them may be a challenge.

It said a Hazmat crew from Vancouver was mobilizing and the owner of the Zim Kingston had contracted the U.S.-based Resolve Marine Group for salvage operations, including firefighting and recovery of the containers.

Resolve Marine had mobilized two vessels that were expected to be on site Sunday.

The Canadian Coast Guard, meanwhile, said it was working through the Emergency Management BC network to broadcast public safety information as required.