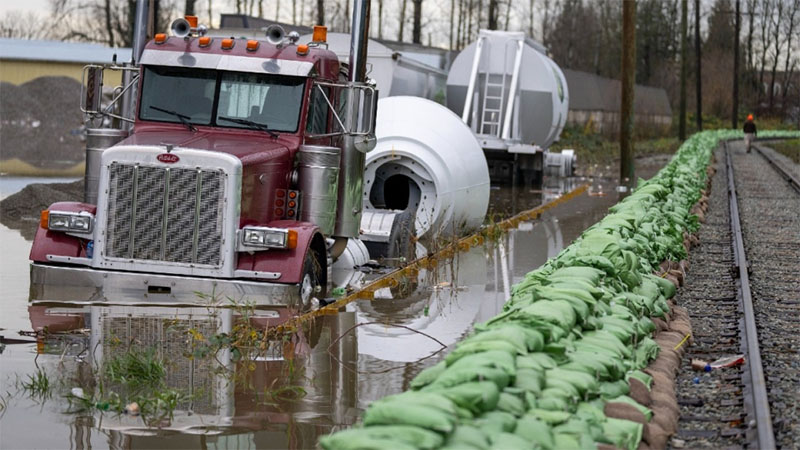 A provincial state of emergency has been extended in B.C. as communities brace for another atmospheric river forecast to hit the province’s southwest region.

Officials in British Columbia have also extended the state of emergency until Dec. 14.

Drivers of non-essential vehicles are only allowed to fill up 30 litres of gasoline per stop at stations across the Lower Mainland, Vancouver Island, Sunshine Coast and Gulf Islands.

Farnworth said extending the province-wide state of emergency will bolster the government’s “response and recovery from the widespread damage already caused by the flooding, while positioning us to take necessary steps in the day ahead.”

Environment Canada has issued a number of rainfall warnings for the Metro Vancouver, North Shore Howe Sound and Sunshine Coast areas, warning of heavy rain beginning on Tuesday and extending into Wednesday.

“Environment and Climate Change Canada are warning of 100-200 mm of rain for exposed areas on Vancouver Island and the Central Coast; 80-120 mm for inland areas of Central Coast, including the Bella Coola valley, and 50-100 mm for the south coast,” the advisory reads.

The department said temperatures are expected to “warm through this event, and will lead to additional runoff from snowmelt at low and mid elevations.”

A local state of emergency was declared in the District of Hope on Sunday.

“Everything’s being monitored ongoing,” he said. “We had a bit of a break from the rain last night for about five hours which helped.”

Robb said the Coquihalla river, which was the “main concern,” has dropped and the flow rate has slowed down a little bit.

He said he’s hopeful Hope only receives between 120 to 130 millimetres of rain, which is currently forecast for the area.

“Any more than that and I’d be getting concerned,” he said. “But if the prediction is correct I think we’ll be fine.”

Robb said crews have been sandbagging and removing debris from ditches in high-risk areas.

Meanwhile in Abbotsford, a local state of emergency has been extended.

During a press conference on Monday, Abbotsford’ Mayor Henry Braun said while the Nooksack River overflowed on Sunday, “we did not see any water cross from Washington State in the eastern portion of the Sumas Prairie.”

“It’s good news as that remains the most critically impacted area,” he said.

Braun said he is feeling more optimistic about the situation, adding that the water from the Nooksack River is taking longer to arrive in Abbotsford than anticipated.

He said the bulk of the water took 19 hours to arrive in Abbotsford.

“So that’s actually good news because we were being told to expect it within four or five hours,” she said. “So what that tells me is there’s less volume that came over the Nooksack – that is very good for us.”

He said he is hopeful that Abbotsford will make it through the third weather event with “only minimal impacts.”

“I’m pleased to share at this point we are holding our own,” he said.

Braun said the water levels in the flooded areas of Sumas Prairie are stable, adding that he is confident the dikes will hold.

As of Tuesday morning, a number of evacuation orders remain in place in Abbotsford, including some properties along Whatcom Road and Sandringham Drive, in the Huntingdon Village, Sumas Prairie and Straiton areas.

In an update on Monday, city officials said the Coldwater River saw “peak flows of 177m3/s and flooding was held back.”

“As more rain is forecast in the catchment basin for the Coldwater, we continue to reinforce the banks,” a Facebook post read.

Merritt Mayor Linda Brown said, with another storm on the way, the city is “monitoring” the situation in many ways.

“Including hourly forecasting from Environment and Climate Change Canada, modelling from the B.C. River Forecast Centre and visual updates from our crews in the field,” she said in an update on Monday.

“We will continue to review this data and have every hope to be able to maintain access to phase three during the day [on Tuesday],” she continued.

In an update Monday, Trans Mountain Pipeline said work to restore the pipeline was interrupted on Sunday due to “high water or lack of access.”

The company said it is still “days away from restarting the pipeline at a reduced capacity.”

“Once restarted, delivery of oil and refined products currently in the line will continue as they progress to their delivery points at either Kamloops, Sumas, or Burnaby,” the statement read.

After initial start-up, Trans Mountain said a “sustained effort will continue to return the system to its full capacity as soon as possible.”

Currently, gasoline is being brought into the province by truck and barge in an effort to prevent shortages.