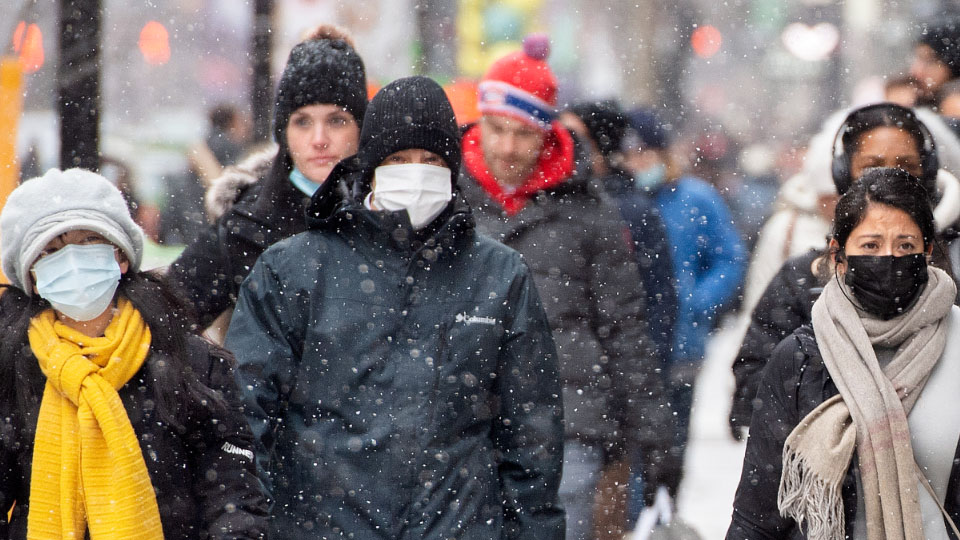 With the COVID-19 pandemic newly invigorated by emergence of the Omicron variant, Canadians are being asked to continue wearing masks and face coverings when in public settings in a bid to limit the spread of the virus.

While the majority of the population is being asked to wear face coverings, some folks are exempt.

Official guidance posted on the Public Health Agency of Canada’s website says masks are not recommended for children under the age of two, or for people who live with illnesses or disabilities that make it difficult to put on or take off a mask without assistance, and for those who have trouble breathing while wearing the mask.

Here’s a look at what each province has said about face mask exemptions:

In Ontario, children two years old and younger are not required to wear a face mask.

According to the province’s website, individuals who have a medical condition that “inhibits your ability to wear a face covering” are also exempt.

People who cannot put on or remove a mask without help from someone else are not required to wear a face mask either.

The province said there are also mask exemptions for those who are receiving accommodations according to the Accessibility for Ontarians with Disabilities Act 2005, or the Human Rights Code.

Quebec officials have outlined a list of situations wherein a face mask or face covering is not required.

Provincial officials say children under 10 — except when in long term care homes and private senior’s homes — are not required to wear masks.

The province also lists a number of health conditions that might prevent someone from wearing a face mask, including people with facial deformities or who cannot put on or take off a face covering without assistance.

In Quebec, those with cognitive impairment, intellectual disabilities, autism spectrum disorder, addiction problems, or severe mental health problems who may not be able to understand the mask requirements are also exempt.

Those for whom wearing a face covering would cause “significant disorganization or distress” are not required to wear one either.

The province says those with severe skin conditions on their face or ears that would be “significantly aggravated” by wearing a mask are not required to do so.

The website also details a number of situations where removing a face mask would be acceptable. The list includes, but is not limited to, removing a mask momentarily for identification purposes or in a restaurant or food court.

In Manitoba, officials say anyone who “cannot wear a mask properly should not wear one.”

The province says this includes people who can’t put one on or remove it without help, or those who are actively having breathing difficulties.

Children under the age of five are also advised not to wear a face mask or covering in Manitoba.

In Saskatchewan, face coverings are not required for children aged two years old and younger, or for those three- to twelve-year-olds who are “not reasonably able” to wear one, a provincial health order reads.

Those who aren’t able to wear a face covering due to a particular health condition, as determined by a health care professional, and who have received written confirmation, are also not required to wear one.

The province says individuals who are unable to understand the face covering requirement due to cognitive impairment, an intellectual disability or a severe mental health condition are also not required to wear one.

There are also exemptions for individuals speaking on television or in media interviews or conferences, those leading services or ceremonies, or performing in bands.

Actors performing in film television or media productions are also exempt for the duration of the scene or performance, but must provide proof of vaccination.

Similar exemptions exist in Saskatchewan for those 18 and older participating in some sporting or fitness activities.

In Alberta, all individuals over the age of two are required to wear a mask, unless they qualify for a medical exemption.

According to the province, health conditions for mask exceptions include:

The province also outlines some situations where face masks would not be required such as while consuming food or drinks.

In other situations, the province says, face masks may be removed temporarily for emergency or medical purposes, or for identification.

In British Columbia, children under 5 years old are not required to wear a face mask.

Those who have some health conditions or physical or mental impairment are also exempt.

According to the province, if you are unable to put on or remove a mask without help from someone else, you are also exempt from wearing a face mask.

The province also specifies that if wearing a mask prevents you from communicating with someone with a hearing impairment, you may be exempt from wearing a mask.

In Nova Scotia, children under two years of age are exempt from wearing a mask, while children between the ages of two to four are exempt if their caregiver can’t get them to wear one.

According to the province’s website, anyone with a “valid medical reason” is also exempt from wearing a mask, as well as anyone who is “reasonably accommodated by not wearing a mask under the Human Rights Act.”

Individuals who are unable to remove a mask without help are also not required to wear one.

The province says, though, that there are “very few medical reasons not to wear a mask,” adding that wearing one “doesn’t worsen chronic lung conditions” like asthma or chronic obstructive pulmonary disease (COPD).’

“If you have chronic breathing problems or a mental health condition that creates anxiety, you may be able to work on ways to overcome the anxiety (like wearing a mask for short periods of time at home),” the website reads. “You can try different types of masks and choose one you’re comfortable with. You can also talk to a doctor or pharmacist about it.”

The province also outlines situations where masks would not be required, like while eating or drinking at a restaurant or food court or in a courtroom.

Masks can also be removed momentarily for identification purposes, the province says.

In Newfoundland and Labrador, children under the age of five are not required to wear a mask, though kids between two and four are “encouraged” to do so.

Mask-wearing is not recommended for children under two in Newfoundland and Labrador.

According to the province’s website, those with particular physical conditions or whose mental health prevent them from wearing a mask are exempt, though officials say those folks are “encourage to wear a face shield instead, if possible.”

The province lists some conditions that may qualify for an exemption as:

– Those who cannot put on or remove a mask independently
– Those with facial deformities
– People who, due to cognitive impairment, an intellectual disability, an autism spectrum disorder, or a severe mental health condition, are unable to understand the requirement, or for whom – – wearing a mask causes “significant distress”
– Individuals with a severe skin condition on the face or ears that would be “significantly aggravated” by wearing a mask
– Individuals with severe respiratory conditions or disease “for whom a mask would further impair their breathing
– Those who are unconscious or incapacitated

Individuals who can’t remove a mask without assistance, and some people with valid medical reasons are also exempt.

However, the province’s website says “most people with underlying medical conditions can wear a mask safely.”

Individuals in P.E.I. may also be excepted from mask wearing during some treatments, services or physical activities, and while eating or drinking.

On September 22, a mandatory masking policy was put in place in New Brunswick.

According to the province’s website, masks are mandatory in all indoor public spaces including retail businesses, malls, service centres, places of worship, restaurants and bars, except while eating.

They are also mandatory at organized indoor gatherings in public places like weddings or funerals, as well as in common areas and shared spaces, and on public transportation.

CTVNews.ca reached out to the New Brunswick Government to determine which folks may be exempt from the mandatory mask wearing, but did not hear back by time of publication.

In the Yukon, children under two are advised not to wear a mask, while children between the ages of two and four are encouraged to wear one if supervised.

Other exemptions include those who can’t put on or take off a mask alone and people who are unable to wear a mask due to a psychological or health condition, cognitive impairment or an intellectual disability.

The territory says people who are speaking during a television or other media news interview or conference are not required to wear a face mask either.

In the Northwest Territories, masks “aren’t recommended for” people who suffer from illnesses or disabilities that make it difficult to put on or remove a mask, those who have difficult breathing and children under two.

The territory says those who are unconscious, incapacitated or “otherwise unable to remove the mask” without assistance are also not recommended to wear a face covering.

Similarly, in Nunavut, officials said children under two, anyone with breathing difficulties, and anyone unconscious should not wear a mask.

Conversion therapy to be illegal in Canada in 30 days