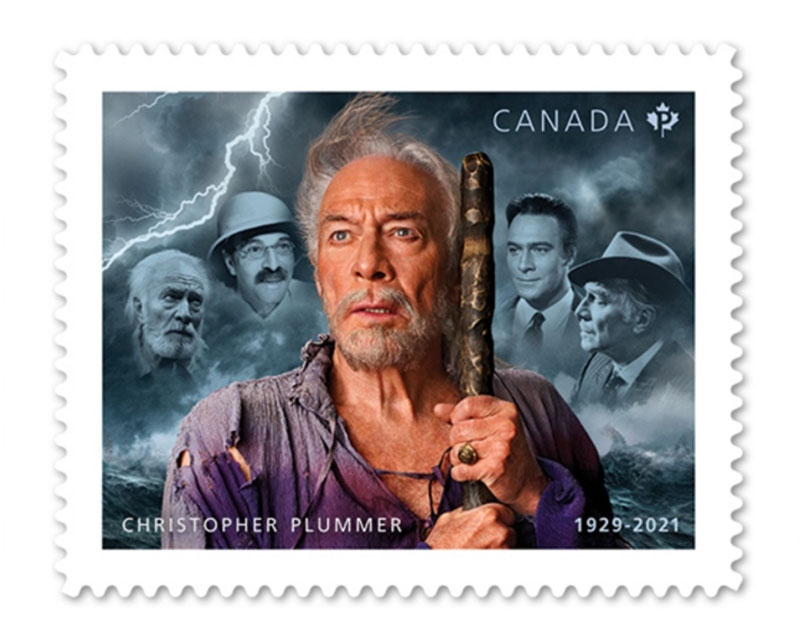 Christopher Plummer used to say he felt at home at Ontario’s Stratford Festival, so it’s fitting that one of his legendary stage roles there is featured on a new Canada Post stamp in his honour.

The work revealed Wednesday depicts the late Toronto-born stage and screen great in several prominent roles from his 70-year career, with his acclaimed turn asProspero the sorcerer in a 2010 production of “The Tempest” in the foreground.

Floating amida background of storm clouds and lightning from “The Tempest” are four images fromother roles: King Lear in a stage production of “King Lear,” Rudyard Kipling in the 1975 adventure feature “The Man Who Would Be King,” Capt. Georg von Trapp in the 1965 musical film “The Sound of Music” and John Barrymore in the play “Barrymore.”

“It’s a beautiful piece and the lightning from the production in the background is suitable for the wilder side of Chris Plummer,” Des McAnuff, former Stratford Festival artistic director who directed Plummer in “The Tempest” and “Caesar and Cleopatra,” said Wednesday in a phone interview.

“He was a great partner and on that one, it was a little bit of a long runway to get him to do it because he would always say: ‘Well, this (role) is what to do when you exit, (when) this is your last show, and I’m not ready to do my last show,”’ added Ontario-raised McAnuff.

“I finally found out that John Gielgud did ‘The Tempest’ six times and so I said, ‘Well, for Gielgud it was an awfully long exit, so I don’t think you have too much to worry about.’ So he then took it on and that was my good luck.”

Canada Post said Plummer played a leading role in selecting the stamp design before he died at his Weston, Conn., home in February at age 91.

The Crown corporation said it first approached the Oscar-winning star about creating a stamp in 2019 and he was thrilled with the idea and consulted along the way.

Nova Scotia-based artist Steven Slippdesigned the stamp and Spooky Pooka did the illustrations.

McAnuff as well as Plummer’s widow, dancer/actress Elaine Taylor Plummer, were among those at Wednesday’s Toronto press conference. Others on hand included his longtime friend and manager, Lou Pitt, and former CBC News anchor and author Peter Mansbridge, the ceremony’s MC.

Plummer appeared in more than 200 screen projects and performed on stages around the world.

His honours included two Emmys, two Tonys and an Academy Award for his supporting role in “Beginners.”

McAnuff, who had plannedto shoot a Canadian big-screen adaptation of “King Lear” starring Plummer this past summer, said the actor was “a truly magnificent creative partner” who “came to the table with insights and ideas.”

“But there was another side of him that’s perhaps surprising,” said McAnuff. “He certainly, of course, had a formidable ego. He was, at the time we launched (‘The Tempest’), the greatest actor in the world. But he was also very modest and gentle and he had a really sensitive and soft side.”

McAnuff recalled Plummer wanted to see a particular lighting cue during technical rehearsals for “The Tempest.” Time was extremely limited and Plummer sat beside him in the front row of the theatre to connect with McAnuff about it.

“He said, ‘Do be patient with me, dear boy. I promise I just want to see this one thing,”’ McAnuff recalled. “And the fact that he would care about my feelings when he’s playing Prospero was just really unexpected and a real building block on our friendship. I saw a dimension there that was a bit of an epiphany.”

McAnuff, a two-time Tony Award winner who recently shot a film version of “Jersey Boys” with Nick Jonas, is bringing his hit musical “Ain’t Too Proud – The Life and Times of the Temptations” back to Broadway this weekend.

Buthis plans for a big-screen “King Lear” adaptation are still alive. He’s producing it with Shaftesbury CEO Christina Jennings and worked closely with Plummer on developing the script.

McAnuff said he’s been told that at the end, Plummer told those close to him that he wanted McAnuff to carry on with the film.

“The problem is, of course, you’re tempted to wait for an actor like Christopher Plummer. You don’t do Lear and then search around for someone to play it. You do ‘King Lear’ because you have an actor that can play Lear,” he said.

“He was, of course, the inspiration for that and I think I could wait a very long time – a very long time, indeed – before an actor like Christopher Plummer comes along.”

Cross-border travel in question for Canadians with mixed vaccines