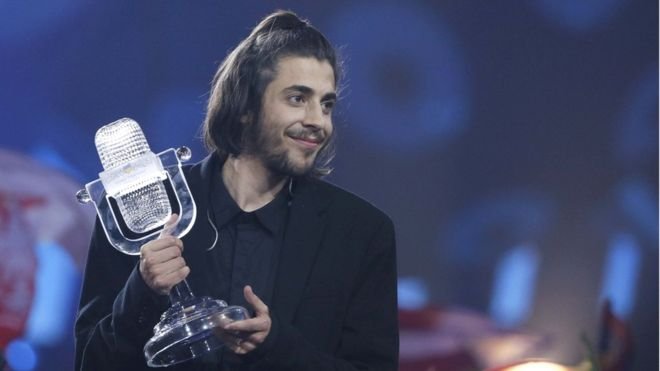 Portugal have won the Eurovision Song Contest for the first time in the competition’s history.

Salvador Sobral, 27, won with his love ballad Amar Pelos Dois, which was written by his sister.

He said on receiving the trophy: “We live in a world of fast food music. This is a victory for music… music isn’t fireworks, music is feeling.”

Lucie Jones, representing the UK with I’ll Never Give Up on You, came 15th. Bulgaria came second and Moldova third.

Jones, a former X Factor contestant, received 111 points for her performance but didn’t seem too upset, tweeting: “I wonnnnnnn!!! Oh no wait…”

It is a considerable improvement for the UK, after last year’s entrants Joe and Jake came 24th with 62 points.

Sobral, who has a serious heart condition that saw him miss the first week of rehearsals, reprised his song at the end of the show and was joined by his sister Luisa for a duet.

Their song, which translates as For the Both of Us, won top marks from both from the televoters and the countries’ professional juries, getting 758 points altogether. This dwarfed Jamala’s win last year for Ukraine with 534 points.

Portugal had been one of the favourites to win, along with Italy’s entry, which came sixth.

It wasn’t all about the singing, though – last year’s winner Jamala had her performance briefly interrupted by a man flashing his bottom.

The stage invader, wrapped in an Australian flag, was swiftly wrestled off the stage by a security guard.

Graham Norton, who was guiding UK viewers through the contest on BBC One, apologised to anyone who was offended by the incident.

The contest this year took place in the Kiev International Exhibition Centre in Ukraine. The host country could only manage 23rd place out of 26 this time round.

Portugal will now host the contest next year.