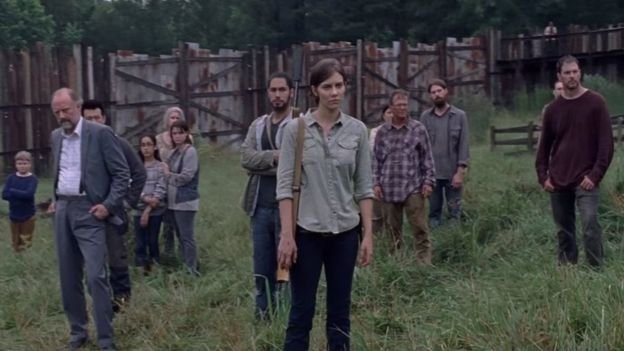 Fans of The Walking Dead have been eagerly waiting for news of what’s to happen to Rick and the Alexandria community when season eight of the zombie drama returns to screens in October.

That patience was rewarded with a five-minute trailer which was presented by the cast and creators at Friday’s Comic-Con panel.

Ahead of the clip, the team began with an emotional tribute to stuntman John Bernecker, who died last week after falling 30ft (9m) onto a concrete floor during a fight scene on the set.

“We didn’t really know if we should do this panel today, but we wanted to be here for you and we wanted to tell you about John and show you what we’ve all been working on,” executive producer Scott M Gimple said.

After criticism from fans that season seven was slow paced and had lost its way, the trailer for season eight was packed with action.

Here’s a few of the things we learned.

He appears to have been captured by Negan and has been locked in a room with zombies banging on the window outside. Negan says what will probably become one of the most quotable lines this season, but it has too many swear words to repeat here.

Everyone’s gearing up for all-out-war with the Saviours

There’s no dialogue for two minutes as we see a montage of people getting ready for the battle of their lives, accompanied by what sounds like those wooden blocks you used to play at school in music class if you couldn’t play any other instruments.

He tells his crew: “When I first met him, Jesus said my world was going to get a whole lot bigger. Well, we found that world. We found each other. That bigger world is ours by right.

He’s responsible for one of the three explosions in the trailer and he doesn’t seem to mind that a zombie hoard is approaching, while casually taking a swig of water.

Jerry is still the funniest character

Even in the midst of war with blood on their faces, Jerry thanks King Ezekiel for “being such a cool dude”. #BromanceGoals.

At the end of the trailer we see Rick lying in a bed with a walking cane against the wall, complete with grey hair and beard.

Fans of the comic will know there’s a big time jump storyline which this could be a nod to – although we hope it’s not just Rick waking up and realising it was all a dream. We’ll find out in October.

Watch the full trailer . Warning: Contains bad language from the outset and graphic scenes of zombies.

Related Topics:EntertainmentThe Walking Dead
Up Next