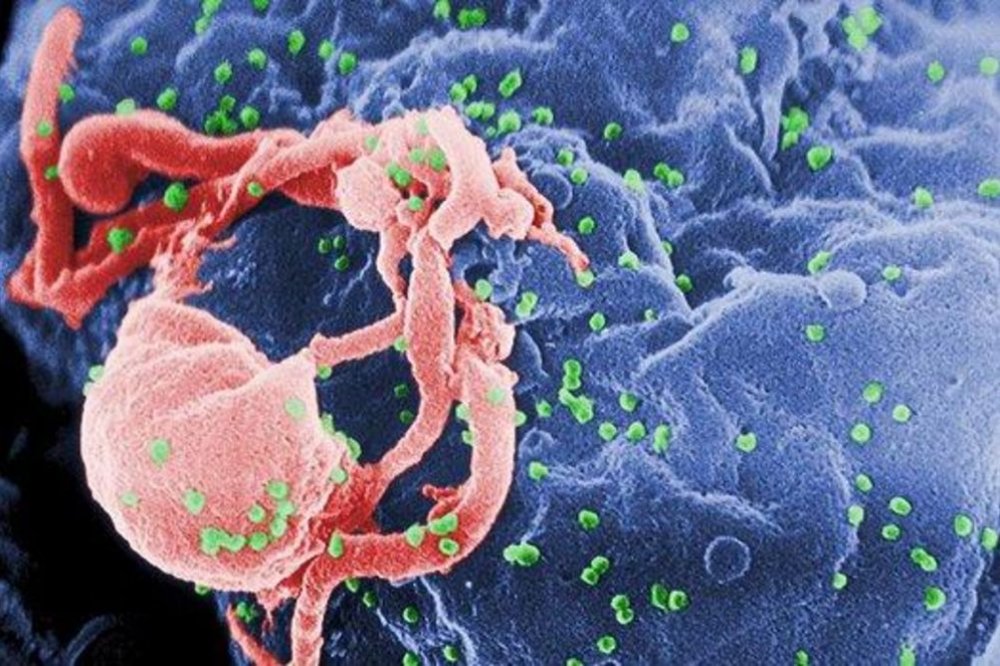 Scientists at the National Institutes of Health have found that the presence of the protein alpha-4 beta-7 integrin on the surface of HIV and its monkey equivalent — simian immunodeficiency virus, or SIV — may help explain why an antibody protected monkeys from SIV in previous experiments.

In October 2016, researchers reported that they had achieved sustained SIV remission in monkeys using a monkey antibody similar to the human drug vedolizumab, which is approved by the U.S. Food and Drug Administration for treating ulcerative colitis and Crohn’s disease. The mechanism behind this observation has been unclear, but a new report presented today at the Conference on Retroviruses and Opportunistic Infections in Seattle provides clues.

Scientists have known that alpha-4 beta-7 integrin is a gut-homing receptor present at high levels on the immune-system cells that HIV and SIV preferentially infect. In the new study, scientists found that maturing HIV and SIV particles acquire alpha-4 beta-7 as they emerge from an infected cell, presenting researchers with a new target for HIV prevention and treatment and shedding light on how HIV disease develops.

“We expected the antibody to attack alpha-4 beta-7 on immune cells and reduce their movement to the gut, where HIV and SIV typically decimate the cells early in infection,” said Anthony S. Fauci, M.D., director of the National Institute of Allergy and Infectious Diseases (NIAID), part of NIH, who co-authored the report as chief of the Laboratory of Immunoregulation (LIR).

“Instead, our team found that anti-alpha-4 beta-7 antibody binds not only to cells but also to HIV and SIV. This likely explains at least in part our previous observation that SIV-infected monkeys treated with antibody to alpha-4 beta-7 and antiretroviral therapy controlled the virus very effectively long after all treatment ended.”

Studies conducted by Dr. Fauci and colleagues in his laboratory and at Emory University, Atlanta, between 2014 and 2016 showed that a laboratory-derived monkey antibody against alpha-4 beta-7 reduced the transmission of SIV to uninfected monkeys and induced sustained SIV remission in infected monkeys. Dr. Fauci’s team undertook the current study to understand why.

HIV and SIV acquire their envelopes from the membranes of the cells from which they emerge, capturing some cellular proteins in the process. Led by Paolo Lusso, M.D., Ph.D., chief of the Viral Pathogenesis Section in the LIR, researchers discovered that HIV buds from membranes of immune cells precisely where alpha-4 beta-7 is concentrated and incorporates alpha-4 beta-7 into its envelope protein. In this way, the virus hijacks a cellular protein to sharpen its assault on the immune system.

Subsequently, Drs. Lusso, Fauci and colleagues conducted experiments to understand the function and prevalence of the alpha-4 beta-7 protein on the HIV envelope. They demonstrated in a mouse model that HIV bearing the protein homes to the gut. They also showed in cell culture that HIV infects alpha-4 beta-7-recognizing gut cells and their neighbors in a dramatically more efficient manner when the virus bears the protein than when it does not.

Finally, they demonstrated that blood samples taken from 33 HIV-infected people and 12 SIV-infected monkeys at multiple time points all had at least some virus bearing alpha-4 beta-7. The percentage of virus particles with the protein was greatest in blood samples taken during the early stage of infection, when the virus multiplies in the alpha-4 beta-7-rich immune cells of the gut.

Based on these findings, the researchers believe the protein is critical to the initial phase of infection, which has a major influence on the subsequent development of HIV disease.

The scientists’ next step is to conduct a study to try to prove that the presence of alpha-4 beta-7 on SIV explains the protective effect of the anti-alpha-4 beta-7 antibody observed in the earlier monkey experiments.

Meanwhile, Dr. Fauci and other NIAID researchers are enrolling participants in a clinical trial to determine whether short-term treatment with vedolizumab in combination with antiretroviral therapy (ART) can generate sustained HIV remission in people living with HIV.