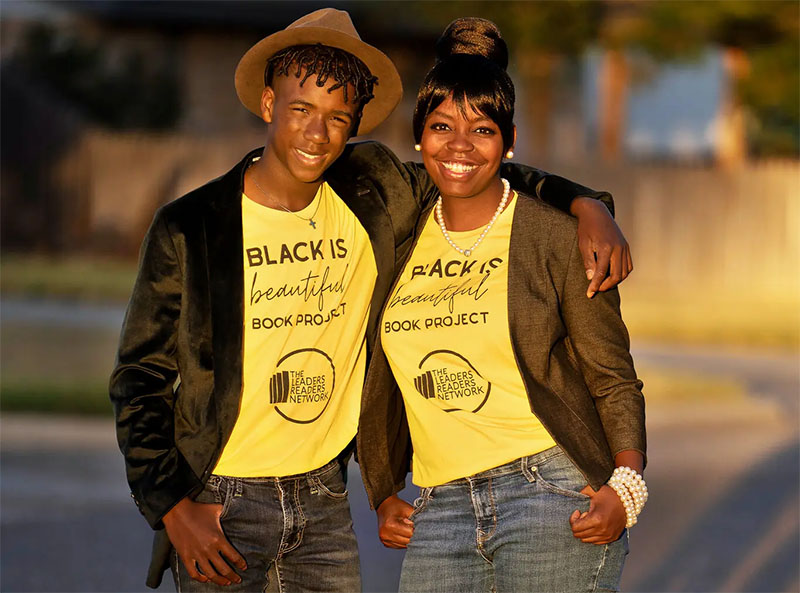 “I’ve never had a book of my own before.”

When Deetress Peoples heard those words from a first-grader at a toy drive in Amarillo, Texas, her dedication to her volunteer work was cemented.

“She held those books in her arms and grabbed her daddy’s hand and she said ‘I’m so excited to read,’” Ms. Peoples recalled.

Ms. Peoples, 35, works with her son, Rashar Steward, 14, to promote literacy in Texas and surrounding states at schools with high percentages of students from low-income families.

“The most rewarding thing is seeing the pictures and the videos of the kids who’ve gotten books, who’ve never actually taken a book home for themselves,” said Rashar, who goes by Ray. “I don’t think I can imagine living without books.”

Ray has become a student ambassador for the Leaders Readers Network, a nonprofit organization that provides books, supplies and initiatives to support early literacy. He and his mother volunteer with an eye toward bringing students materials that feel relevant to them, through an initiative called the Black Is Beautiful Book Project.

“I remember my first book with a Black character. ‘Amazing Grace’ was the first book I received as a kid that had a Black character in it,” Ms. Peoples said. “That made me very excited to read a book. And so for my son, I wanted him to have that same experience where he can get excited to see someone that looks like him.”

The Black Is Beautiful Book Project is one of several Leaders Readers Network projects to promote literacy through representation, an issue enforced by the teachers the organization works with. The network collaborated with First Book, a beneficiary of The New York Times’s Neediest Cases Fund, as part of First Book’s Stories for All project, which promotes the publishing and selling of diverse titles.

“Sometimes publishers wouldn’t be making those books to begin with, and we’re able to come in and say that we have teachers who are asking for these books,” said Ian Kenison, a spokesman for First Book, in reference to books with protagonists of color and bilingual works. “It shows the publishers how sought-after these books really are.”

Leaders Readers was awarded $20,000 in Neediest Cases money as part of a matching grant through First Book to support projects that highlight topics such as the Tuskegee Airmen and the Little Rock Nine.

Veronica Liu, the founder of Word Up Community Bookshop in Washington Heights, has heard the calls for bilingual books and stories with diverse protagonists loud and clear.

“What comes up a lot is what kind of access is there to the things that the community wants to read,” Ms. Liu said.

Ms. Liu stocks multilingual works relating to the issues faced in her community, which is primarily Black and Latino. Her store is one of the local, minority-owned bookstores from which Children’s Aid, another beneficiary of The Fund, bought books this year for its annual Reading on the Rug series.

When the early childhood programs team at Children’s Aid saw in December that children ages 2 to 4 were struggling in language and literacy, it kicked off the new year with focused programming, and its annual Reading on the Rug series in March was incorporated into the effort.

The series began in 2017, spearheaded by Adriana Alba, who works on early childhood programs at Children’s Aid. Ms. Alba sees reading and language skills as vital to the team’s work, and the series reinforces that by bringing underrepresented authors and illustrators to the centers she manages in Harlem, the South Bronx and Washington Heights, as well as on Staten Island.

“Our population is very immigrant heavy. We’re in neighborhoods that are dealing with poverty and systemic racism,” Ms. Alba said. “Finding a way to introduce kiddos to people that look like them and stories that validated the things that they were going through on a daily basis was something really important to me.”

This year, Children’s Aid bought copies of the books featured in the programming for each child, using $11,136 in Neediest Cases money. It also started a lending library and worked closely with parents to promote best practices in reading.

So when Nelly López’s daughter Norismar, 4, began bringing books home, Ms. López was both prepared and excited. Ms. López, who moved to Washington Heights from the Dominican Republic in 2019 with her husband and two daughters, speaks Spanish.

While she was unable to read the English-language books herself, Ms. López, 41, had attended a virtual bilingual lesson with Children’s Aid and knew how to engage her daughter.

“They were highly illustrated books with a lot of symbolism,” she said, adding that she felt she was able to help Norismar with the books.

By May, Children’s Aid said, the children enrolled in the programming had improved significantly in meeting national standards for language and literacy.

Akia Wells, whose daughter also participated in the program, credits the Children’s Aid campaign with her daughter’s rapid development. Ms. Wells said her daughter, Akianti, 4, could now do more than use the pictures to read. “She’s actually reading the words,” said Ms. Wells, 44.

Ms. Wells was able to watch at home as Akianti and some classmates engaged with their teachers and guests speakers through the virtual lessons (others were in person). Akianti’s lessons included a reading by the writer and photographer Charles Smith Jr. from his book “I Am America.”

“The author was able to read their book and express themselves,” Ms. Wells said, “and it allowed the kids to be able to do the same thing.”